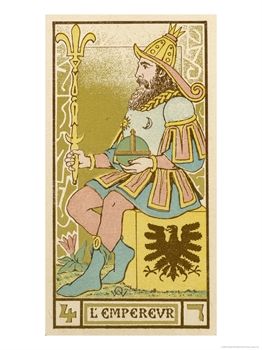 Following the Empress fair and full of light, who could rise to no greater heights in the Tarot, comes the gloomy sovereign of hell, for the Emperor is a Pluto imprisoned in the core of things. He personifies life giving Fire which burns at the expense of the Alchemists' Sulphur, whose sign is a triangle placed on the cross.

Now the Emperor's legs are crossed under a triangle outlined by his head and arms. His throne is a golden cube on which stands out a black eagle, making a strange contrast with that of the Empress's emblem. Here it is no longer a question of the soul having finally reached into heaven, but of the substance of the soul darkened through its incarnation and held captive in the very centre of matter at which it must work in order to regain its freedom. This bird of prey is related also to basic egoism, which gives birth to all individuality.

The Emperor is, in fact, the Worldly Prince; he reigns over the concrete and corporal things, hence the contrast between his lower empire - hence infernal, in the etymological sense of the word, and the heavenly power of the Empress. She rules directly over souls and the pure spirits. On the other hand bodies remain subject to the power of the Emperor who gives them life and rules them after he has created them.

He corresponds to the Demiurge of the Platonic philosophers and to the Great rounder of the Freemasons. Living beings take shape and develop on his impulsion: he is their inner god, the principle of fixity, of growth and of action. It is the individual spirit, the objective manifestation of the Universal spirit, One in its creative essence, but shared out in the multiplicity of creatures.

The sovereignty of the Emperor is shared out among all living beings. It is given to them through Mercy (Ch'esed, the fourth Sephirah). His cube-shaped throne is the only one which cannot be overturned, its stability resulting from its geometric shape, attributed by the Alchemists to the Philosopher's Stone. This mysterious stone which is the Wise Men's object of pursuit, is related to the perfection of which individuals are capable. These people must attempt to conform to 'type' within the species, as depicted by the cubic stone of the Freemasons, a rectangular block cut out according to the setsquare (norma in Latin) so that the ideal envisaged is none other than the completely 'normal' man.

If the Emperor corresponds both in the Macrocosm and in the Microcosm to what is immutable, it is that he is seated on the perfect cube, the starting point which determines all constructive crystallization. In every person he represents the principle of fixity (Archeus ~ ) which becomes active in the seed to construct the organism. This construction proceeds through the agglomerations of elements which were attracted by the first stone to be correctly cut in the living edifice. This stone is the throne of the sovereign of life shared out among all creatures.

The globe of the world which the Emperor holds in his left hand is a sign of universal domination. This globe, moreover, is the symbol, not of the physical universe, but of the Soul of the World, the entity thanks to which all the miracles of Nature and Art are performed. In his right hand the Emperor clasps a massive sceptre which is not without analogy to the club of Hercules. However, we must not see in this a brutal weapon, but the emblem of the highest initiating, or magical, power.

Let us also take note that the end of the imperial sceptre is in the form of the fleur de-Iys. This emblem is based on the upturned triangle, which represents Water or Soul. A simple cross surmounting this triangle would form the sign of the Great Work.

The Emperor is not a despot who imposes his will in an arbitrary way; there is nothing brutal about his reign: for it is inspired by a great ideal of kindness which is symbolized by the Hermetic ideogram from which the connoisseurs of heraldry have taken their fleur-de-Iys.