In more generic symbolism, the trident symbol shows the cross pierced by a U. Thus it takes on the symbol of the cross.  The U shape represents the chalice or cup into which the Water  - spiritual input - is poured.

In more specific symbolism associated with the techniques that use making love, sex magick and sexual stimulation,  the trident is the symbol of kundalini energy. 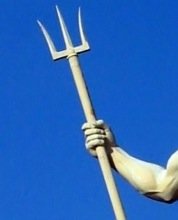 It is a widely used symbol.  The major Hindu Lord and God Shiva and Greco-Roman sea god Poseidon or the Roman god of the sea Neptune, for example, are classically depicted bearing a trident.

There is a final meaning, not in opposition to those above, but which applies only in certain contexts, more as a badge of office

Eugene Canseliet issue N° 11/12 of The Tour Saint Jacques:
… Magic and Alchemy form, together with Astrology, the three branches born from the central tree, that is the Universal science, the real emanation of the indivisibile Truth. If we imagine them as a trident, magic is its middle shaft […] Magic, we have to insist, is the origin of alchemy and astrology and it is necessary for all their operations, because is the essential and imponderable engine…"