A story to teach symbols and the meaning of symbols

Chapter 20: The Rainy Season and Autumn in Vrindâvana*

(3) Then with flashes of lightening at the horizon and rumbling skies, the rains began to fall that bring life to all living beings.

(4) The sky being covered with dense, dark clouds accompanied by lightening and thunder was, with its diffuse light, like the spirit and soul that manifest along with their material qualities.

(5) For eight months in a row the sun with its rays drank the wealth of the earth that consists of water and now the time had arrived for its release.

(6) Massive clouds full of lightening and agitated by the fierce winds released their grace, just as persons of mercy give their life in this world.

(7) The earth that dried up because of the heat, being sprinkled by the divine water, was fully replenished just like the sensually motivated body of a repentant person restores after obtaining the fruits of that practice.

(8) Because of the darkness the glowworm in the evening twilight could shine its light, but that was not true for the luminaries, just like in Kali-yuga because of the sins the heresies are shining and certainly not the Vedas.

(9) The frogs at first sitting silently, hearing the sounds of the rain clouds thereupon emitted their sounds, just like the followers of Brahmâ do after completing their morning duties

(10) After first having been insignificant streams, the rivers that had dried up strayed from their courses, just like it happens with the body size, the property and the means of a person who is controlled by his senses.

(11) Emerald green from the newly grown grass, reddish from the indragopa insects and affording the mushrooms shelter, the earth manifested herself like a person who [suddenly] became rich.

(12) The fields rich with grains brought joy to the farmers, but made others, the wealthy ones who were too proud for that type of work, feel sorry not to live by that grace of God.

(13) The creatures of the land and water, all reborn from the water they honored, took on attractive forms, just like people do when they honor the Lord.

(14) Where the rivers whirling met the ocean, waves were created that were blown up by the wind, just like the mind of a by desire driven, beginning yogi is agitated who is still bound to material passions [reduce desires].

(15) The mountains besieged by clouds filled with rain stood undaunted under their attack, just like the minds of the ones dedicated to the Lord in the Beyond do when they face trouble.

(16) The roads no longer used faded away being overgrown by grass, just like written texts do that, not being studied by the brahmins, wither away under the influence of time.

(17) The lightening in the clouds that are the friends of all the world, fickle in its friendship, could not keep its position, just like a lusty woman cannot [even] stay with men of merit.

(18) When the rainbow of the great Indra unstrung but clearly defined appeared in the sky, it was as if the Supreme Personality Free from the Modes had appeared within the manifest nature that is ruled by the modes.

(19) The moon did not shine because its light was covered by the clouds that radiated thereof, the same way the false ego of the living being shines because of its luster [squash the big I am].

(20) Because of the arrival of the clouds the peacocks cried joyously in celebration, the same way people who are troubled in their household existence are glad when the devotees of Acyuta arrive.

(21) The trees that drank the water through their feet, manifested various physical features [like blossoms, leaves and sprouts], just like [the flourishing that happens] when one, after being emaciated and fatigued because of austerities, [finally] may delight in the object of one's desire.

(22) The cranes kept staying at the muddy banks of the lakes my best one, just like the citizens do who with vain hope restlessly engage themselves in their homes.

(23) When Indra showers his rains the irrigation dikes break because of the floodwater, just as the paths of the Vedas are broken up by the false theories of the heretics in Kali-yuga.

(24) The clouds driven by the winds released their nectarean water over all living beings, just like kings, encouraged by the brahmins, from time to time give their donations in charity.

Reducing desires
Squash the big I am 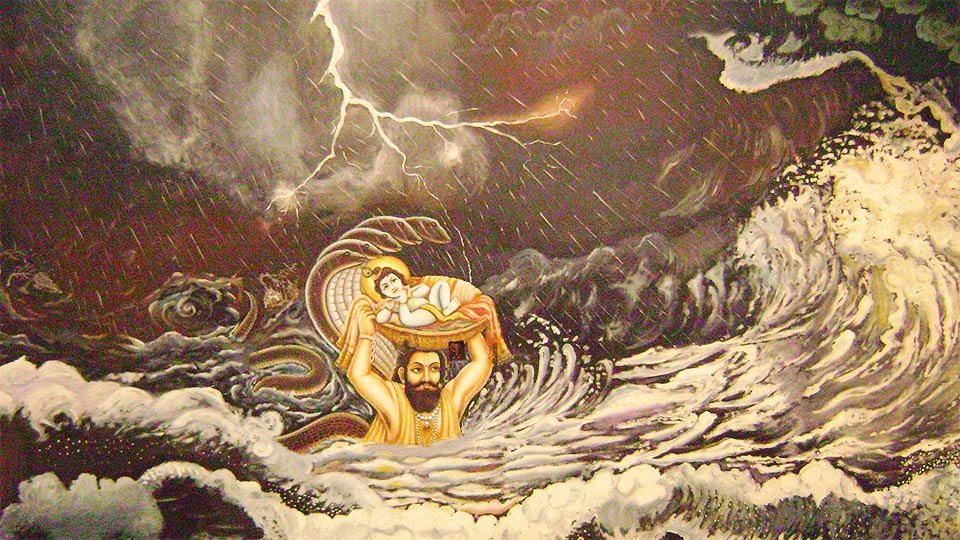