Whilst Rider Waite concentrates on the negative aspects of the devil and the problem of demons, Crowley uses a completely different approach, though being Crowley a huge amount more is implied rather unique to him - some of the symbolism is found in no other card.

At the bottom we have souls trapped - unable to get out of their little bubble and ascend.  The bubble is in this case equivalent to the aura [aura, egg and atom are all the same], but there is a bit more to this as we shall see.

The caduceus has no intertwining snakes, the snakes are waiting in the wings so to speak  - so no spiritual experience as yet.  Trapped in the material world with no access to the spiritual.  But it is there waiting.

He uses a Ram - a male goat implying much the same as Rider Waite that the masculine blocks the route.  Crowley himself states that the goat is also Pan.  It has a third eye and the third eye is the last chakra before the opening of the crown chakra.

The central pillar - in this case the equivalent of the tree of life and the route to the stars is blocked, the only paths open are the path to the Moon and the Sun [the horns and the tunnels].

In a very typical Crowley bit of magical wordplay, the route is blocked by the rings of Saturn and saturn is Satan, which parly hints that Crowley thought that saturn was the big block symbolically and the last level and layer before breakthrough into the wider spiritual world.

But I think Crowley falls down in this card by not giving any clear explicit clues as to why there is no experience.  About the only clue is in the right bubble where the people appear to be fighting - which is Hurt - and the means by which demons are created - but this is certainly not the main intention of the card.

So there is more to this card and it owes nothing to any of the symbolism in any other card.

If you use sexual stimulation there is a period where you have to abstain from any form of release of sexual energy - you bottle it up.  So Crowley was using the card to show that the masculine is used to block the path to a kundalini experience until such time, presumably as the genies were released from the bottle and the caduceus became a caduceus.

The symbolism is entirely differnet from Rider Waite - entirely different because Rider Waite was attempting to show the path of suppression and Crowley was showing - well Crowley, but also something of the hidden truths of the use of sexually based methods - an approach which had indeed been demonised for centuries. 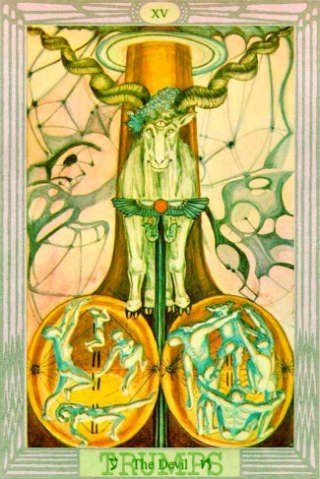