We are a cone of energy that covers a number of levels and layers.  From above vibrationally this would look like a series of concentric rings with the Higher spirit in the centre.

Anyone on the spiritual path metaphorically ascends these rings climbing steadily upwards in a spiral. They ascend clockwise and descend anti-clockwise.

And this is the action of a spider as they build a web.

Thus one symbolic meaning of the web is that it is the spiritual path and the spider is our Higher spirit.

From this simple imagery we of course get all sorts of additional symbols like spider man and spider woman with their curls.

The symbolism is helped because the spider is industrious and hard working a feature needed for the spiritual path.

And it also perseveres, even if its web is damaged or it suffers a setback, it sets to and repairs the damage and doesn’t give in.

The spiritual path is one also connected with weaving and the idea that there is a sort of plan attached to our progress [or lack of it],  thus spider, web and loom symbolism are often found together.

And there is also a connection with the wheel for exactly the same reason.

The spider as a symbol of the Higher spirit is in some ways rather apt.  As we – the little soul fly or butterfly climbs towards the centre we are in many ways heading to our annihilation from a spiritual point of view.  The end of the spiritual path is that we are consumed by the Higher spirit and thus as a personality no longer exist, the spider consumes the fly – or the butterfly if you prefer.

Given that we can ascend even higher once beyond the soul cone, the ascent through the planets can also looked on as a spiral path towards the Ultimate Intelligence.

And thus as you can see the Ultimate Intelligence is also occasionally represented as a spider weaving Creation,  the Order of Creation being a spiral. 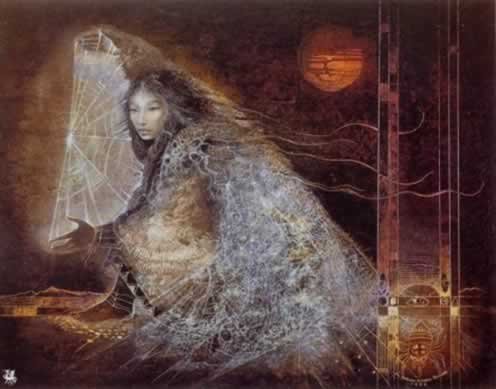