There are three versions of  this card, all related to the Sephirot. 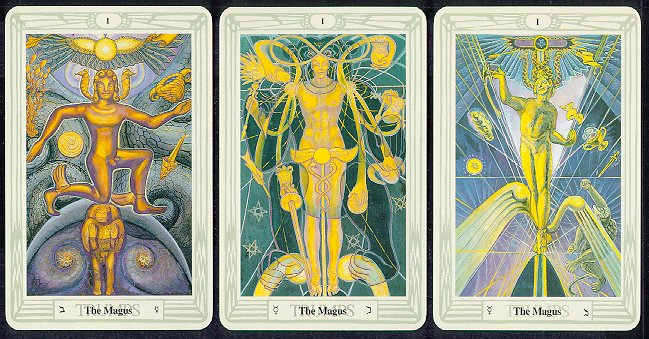 Each one is alluding to the combination of the masculine and feminine in the Sephirot with the 'Middle way', thus leading to the pinnacle of spiritual prowess and success.

And now I quote "The Magus fulfils Crowley’s definition of Magick: “the science and art of causing change to occur in conformity with will.”

The Magus is naked and androgynous.  He/she has a disk, a wand of double power, a pen, a scroll, a winged egg, a cup and a dagger.  The censor in the Thoth deck replaces the usual Wand and when used with the cup, the censor represents the consecrating fire in the Neophyte Ceremony of the Golden dawn as well as the Gnostic Mass. The Winged Egg represents the 5th element of spirit [Higher spirit].

The ‘Wand of Double power’ is a symbol of the power and energy of Horus and it symbolises the harmonising energy of the Sun and Tipareth. Its function is to unite opposites under one will.  The pen and scroll are implements of Thoth, the Egyptian god of writing.

The Magus also wears winged sandals and there is an ape below the Magus.  One has finally squashed the monkey within." [symbol of base earthly desires] 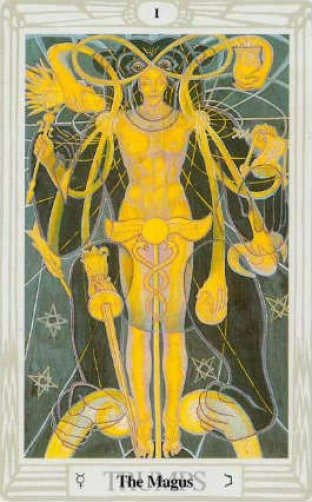