Whilst our video explores the symbolism of the Bear from the atsrological perspective, the text explores some more general symbolism

In effect, the bear is a symbol of the earthly instincts, the autonomic system and the early stages of the spiritual path.  But it has shamanic roots and is thus one of the very key animals used in shamanic societes as their spirit helpers.  Bears were also a frequent animal found in shape shifting. 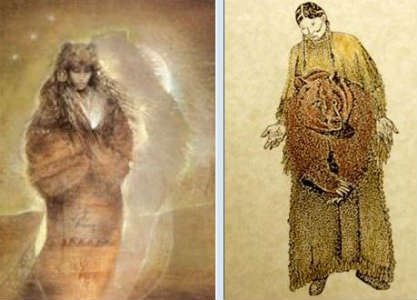 Bears are considered to be similar in personality and temperament to humans as they are intelligent, curious, highly adaptable, brazen and persistant creatures, with an inate awareness of fairness and honour. The Bear is often the totem spirit of those who are extraordinarily 'strong of body, mind, and soul'.

Cultural use of the bear

In Scandinavia the word for bear is björn (or bjørn), and is a relatively common given name for males. The use of this name is ancient and has been found mentioned in several runestone inscriptions.  The reconstructed Proto-Indo-European name of the bear provides the root for Avestan arša, Greek ρκτος, Latin ursus, Welsh arth.

In Russian and other Slavic languages, the word , "Medved" (медведь), and variants or derivatives such as Medvedev are common surnames. The Russian word "Medved" (медведь), as well as the Ukrainian word "Vedmid'" (ведмідь), stands for an animal who knows where the honey is. The word "Med" (мед) means "honey", which given the symbolic meaning of honey is very apt - spirit input or spiritual experience.  Also, the word "berloga" (берлога) stands for the bear's lair. Hence the name "Berlin" -- the capital of Germany.

In East European Jewish communities, the name "Ber" (בער) — Yiddish cognate of "Bear" — has been attested as a common male first name, at least since the 18th century, and was among others the name of several prominent Rabbis. The Yiddish "Ber" is still in use among Orthodox Jewish communities in Israel, the US and other countries.  With the transition from Yiddish to Hebrew under the influence of Zionism, the Hebrew word for "bear", "Dov" (דב), was taken up in contemporary Israel and is at present among the commonly used male first names in that country.   "Ten Bears" (Paruasemana) was the name of a well-known 19th Century chieftain among the Comanche. Also among other Native American tribes, bear-related names are attested.

All of which long explanation goes to prove the importance of the bear to shamanic societies.  They are intelligent powerul creatures as such becoming a 'bear' was a positive aspect in early cultures.

Wikipedia
[In Finish cultures] There is evidence of prehistoric bear worship, [Arctic, Arcturus, Great Bear, Berserker, Kalevala]. Anthropologists such as Joseph Campbell have regarded this as a common feature in most of the fishing and hunting-tribes. The prehistoric Finns, along with most Finno-Ugric peoples, considered the bear as the spirit of one's forefathers. This is why the bear (karhu) was a greatly respected animal, with several euphemistic names (such as otso, mesikämmen and kontio). The bear is the national animal of Finland.

Native American Indians were named after bears as their Totem group.

This said, her hand within her hair she wound,
Swung her to Earth, and drag'd her on the ground:
The prostrate wretch lifts up her arms in pray'r;
Her arms grow shaggy, and deform'd with hair,
Her nails are sharpen'd into pointed claws,
Her hands bear half her weight, and turn to paws;
Her lips, that once cou'd tempt a God, begin
To grow distorted in an ugly grin.
And, lest the supplicating brute might reach
The ears of Jove, she was depriv'd of speech:
Her surly voice thro' a hoarse passage came
In savage sounds: her mind was still the same,
The furry monster fix'd her eyes above,
And heav'd her new unwieldy paws to Jove,
And beg'd his aid with inward groans; and tho'
She could not call him false, she thought him so.
How did she fear to lodge in woods alone,
And haunt the fields and meadows, once her own!
How often wou'd the deep-mouth'd dogs pursue,
Whilst from her hounds the frighted huntress flew!
How did she fear her fellow-brutes, and shun
The shaggy bear, tho' now her self was one!
How from the sight of rugged wolves retire,
Although the grim Lycaon was her sire!

In Norse cultures, the Bear is considered the greatest of all beasts, and is held sacred to Thor.  In Celtic culture, Artio was the early Continental Celtic Bear-Goddess. She was worshipped in the North-East of Gallia. The bronze statue of Muri shows her as a woman carrying in one hand a bowl, in the other flowers and fruits; next to her sits a bear under a tree. She was found mentioned in inscriptions in the Bern region (Switzerland).

There has been evidence about early bear worship in China and among the Ainu culture as well (Iomante). Korean people in their mythology identify the bear as their ancestor and symbolic animal. According to the Korean legend, a god imposed a difficult test on a she-bear, and when she passed it the god turned her into a woman and married her. 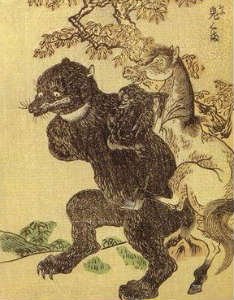 The last but probably most important aspect of the Bear, however, is that it is yet another symbol -like the boar or the stag or the bull of the Creator - the creative force

We have the Creator as bear [male]and the Created as the bear [female]- the she bear being an animal that protects its young, the male bear being virile and productive.

The she-Bear, is then a figure associated with the Moon – not a Creator, but a part of the Created – the passive component of Creation.

A bear person is to all intents and purposes a god or a goddess.