Symbolically the same as the Bull – see Bull and Cow. But by implication a Ram being similar to a goat in the countries where it is symbolically used, climbing mountains or hills, has symbolically the ability to climb higher than a bull or for that matter an elephant, so what it lacks in power it gains in agility.  At times a Ram takes on similar symbolism to birds for this reason.

The Ram has a lot of symbolically significant additional features.  It has the two horns on its head   - the tunnel – but the horns curl significantly meaning that as symbolic representations of the chakras they are very good – the swirling whirling energy portals that give you an out of body experience.

Furthermore the Ram like the goat is found on mountains , which means one can use the symbolism to indicate a powerfully spiritual person who is on the spiritual path.  Any goat or ram found on top of a mountain has thus achieved moksha or nirvana. 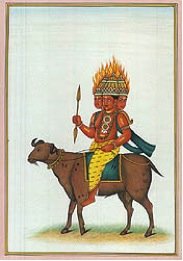 Within the Hindu cosmology, Lord Agni, or the Lord of Fire, holds the second most important position in Hindu mythology, after Indra. He is often shown as red-hued, short, pot-bellied with three legs, seven tongues, seven arms and two faces. The two faces signify both the creative and destructive properties of fire.  If he has three faces then he is representing the three main activities in the Great Work - creation, destruction and maintenance.  The very first verse of the Rig Veda starts with a hymn to Agni. Hindu mythology holds Agni in an exalted position. The Upanishads talk about him as the supreme Lord and the Eternal Flame.

Agni is shown as riding the Ram and rarely, a chariot pulled by goats. Thus his means of transport was a Ram.

If you also look at the symbolism for columns you will see that Ram’s horns are incorporated into column headings.

And of course the Zodiac symbol for CAPRICORN.