The Hypnerotomachia Poliphili was written by Francesco Colonna, a Dominican friar in the 16th century.  The book describes the allegorical journey of the spiritual traveller and in the course of the book just about every symbolic spiritual feature is incorporated into the story.  And one of the features he encounters is a reviving spring – a source of hope and new energy………..

A glorious spring presented itself to me 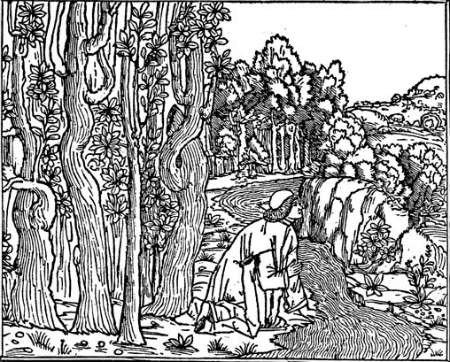 ..... the spring gave fresh water with a musky but clean odour, shooting sixteen palms high.  Hercules fountain in Gades did not flow with such plentiful and fresh water.  These waters were so limpid, pure and subtle that they placed no obstacle or distortion between the sense and the object.  Everything that lay on the bottom was perfectly visible, and everything around was reflected in its integrity as in a mirror.  The river bed of gold bearing sand was level and full of fine pebbles of many bright colours.......

The Eridanus was not more acceptable or refreshing to the Ligurian people than this stream was to me, nor was Liber more grateful for the spring shown him by the fleeting ram.  But just as I was raising my hands with the delicious and longed for water to my open mouth, at that very instant a Doric song penetrated the caverns of my ears – I was sure that it was by Thanryas of Thrace.  It filled my disquieted heart with such sweetness and harmony that I thought it could not be an earthly voice; it had such harmony, such incredible sonority and such unusual rhythm as I could never have imagined, and it certainly exceeded my power to describe it.  Its sweetness and charm gave me much more pleasure than the little cup I was offering myself, so that the water began to run out between my fingers.  My mind was as though stupefied and senseless, my appetite sated, as powerless to resists I loosed my knuckles and spilled it out on the damp earth.