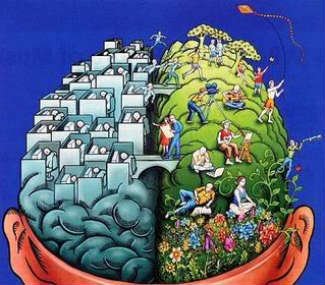 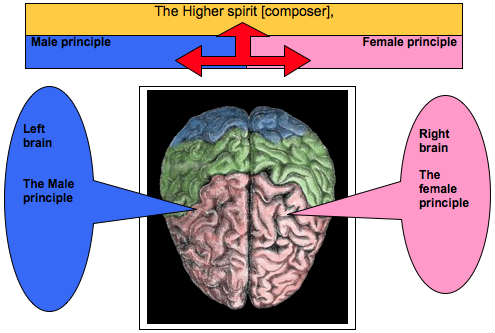 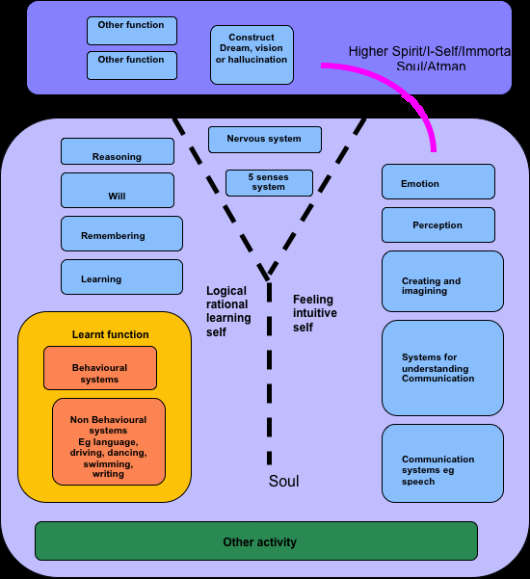 All the functions above have been defined apart from a few. For definitions of these functions see:

The left brain largely contains the functions of the intellect we can see in the diagram.  On the whole it is unemotional – cool and straightforward, and fairly controlled. Good in a crisis.

It includes logic and reason and memory.  It is good at deduction and analysis and inference - working bottom up from observations and seeing patterns or working out classes that can be used again and again.  This side is thus a creative side, because it understands system. This is where we find the engineers, the computer people, the medics, the scientists, the lawyers, and the people who make the train timetables!

Without the left brainers we would still be living in skins and scratching the earth for food.  We would have been cold and miserable and hungry and dirty.  In fact we may not have been here at all, because we wouldn’t have become organised enough to survive. The left brain has been a gift of untold usefulness to us as human beings and we have both used and abused it.  To be a co-creator, you use the left brain.  To create systems this is what you need. We have become more left brained because this is what was wanted – it was part of the objectives of creation. But, there is a 'but' and there always is.

The left brain is not, on the whole, interested in beauty or laughter, joy or compassion.  They will design a car, but it will not be aesthetically pleasing – it will just work. They don’t even understand what the right brainers are talking about when it comes to beauty.  Architects who are very left brained design tower blocks so ugly, they scar the landscape.  A left brained doctor may treat a person medically, but they won’t be able to see the person as a human being with feelings, only a system needing maintenance.  The left brain is also lacking in inspiration – it slogs away to get results, it doesn’t get that flash of inspiration that means an eureka moment.

Anyone who is very left brained also tends to be a bit dull, the curiosity dimmed, the fun is lacking, the empathy gone, which means they may be logical, but they can end up very poor company. They will also make poor scientists because they don’t really look or see or truly observe.

At worst we also have selfishness, because without any balancing from the female side of the brain, we also have a person who is by nature cunning and tricky with strong self-awareness and a strong ego. Financial people, market makers and bankers, for example.

The right brain contains the emotions and the feelings. It also is the seat of inspiration, imagination, intuition and artistic creativity [painting, music, sculpture, poetry etc].  The right brainer loves beauty and is aesthetically highly developed.

So here we also have a co-creator but a very disorganised one. Most right brainers need a left brainer to get their creations into the public eye – a patron. They are useless at spotting patterns, useless at being on time or organised.  They can appear frivolous, irrational, even rude and erratic to a left brainer and a bit untrustworthy because they are pleasure seeking – like a child. A real left brainer regards anyone who is very right brained as being a parasite on society, because they produce nothing that the left brainer would regard as ‘useful’.

Their memory is, on the whole, not as good as the left brainer, it isn’t absent, it just seems to be a different kind of memory based on [principally] symbols and images.  Perceptions seem to be better. But because the logical and reasoning side can be a bit weak, they can be just a dash dippy. At best somewhat innocent, at worst gullible.  And unable to do their tax returns.

But boy can they love and feel and care.  Sexually they are like a powerhouse and can be almost insatiable, they throw themselves into love affairs with every part of their soul and they really love.  And they love lots of things – children especially, animals, strong organised men and women [the parents for the child in them]. Their attachments are real and strong, but they don’t understand the concept of fidelity, they just love. If it goes wrong they die a little. A right brainer can die of a broken heart.