The meaning of the pillar depends largely on how many there are.  In the following description [which is quite long], the symbolism of each of the following is described in this order

The most important symbolically is the last category - three pillars - although two and three are related.

In general usage, a single pillar - usually a single lone pillar or at least groups of separated pillars is synonymous with a tunnel and thus a part of either our communications network or the network beyond our soul cone.  It also has symbolic associations with the celestial pole.  [In terms of the body = the spine]. For more details see the entry on the tunnel.

The term axis mundi appears to have been coined as a sort of catch all name for anything else that looks like a column or pillar.  Just some of the many alternatives which seem to be mentionned as possible visionary alternatives include:

But pillars have been used in other contexts.

Four columns which hold up a canopy or roof or similar structure also represent in some symbol systems the activities which underpin ascension, or spiritual progress.

The number of columns appears to have originated in the work of people like Thomas Aquinas.

Unfortunately, there seems to be no common agreement on what the columns represent.  But where there appears to have been some understanding behind the development, the columns may relate to the Tarot cards, for example in one description one might find them described as  temperance, strength [fortitude], judgement [prudence] and justice.

These are found in the Major Arcana of the Tarot.

In fact this degradation shows a shift away from spiritual meaning to moral meaning, which are not necessarily always at odds, but which are as a consequence the subject of far more debate.

What helps you with spiritual experience is very simply and easily described and shown in the section on How to get to heaven.

What constitutes a moral act can be discussed until the cows come home.  Spiritually the only two moral activities which help are Dont hurt and Love, but of course these too can be interpreted in numerous ways.

‘Dwarfs’ – spiritual beings that are found in numerous legends and myths were said to live in caves and in hills or  mounds.  Whenever they had a ‘party’ in which a human being was ‘invited’ they raised the hill on columns.  Occasionally those same columns might appear in caves.

from The World Guide to Gnomes, Fairies, Elves and Other Little People compiled by Thomas Keightley
on great occasions of festivity, they have their hills raised up on red pillars ….......

These tales are spiritual experiences and as such the hills, mounds, caves and pillars are all symbolic and part of the experience, but it is clear that pillars played an important part in many hallucinatory experiences as a support and revealer of the spiritual world.  The colour red was fairly prevalent – so prevalent that it became sacred to many cultures who then physically copied what they had seen in the hallucinations by using haematite or red ochre to colour the stalagmites or stalactites in caves or even to colour tree stumps and pseudo columns.  Archaeologists have found huge blocks of haematite in a number of Neanderthal habitations.

Twin pillars are very key spiritually and symbolically and marry too with the next type of three pillars.  The twin pillars found on numerous Tarot cards, in the symbols for Freemasonry and in other mystic systems are the two tunnels used for birth and death - the blue route and red route.  Symbolically they are the same as the Twin horns. 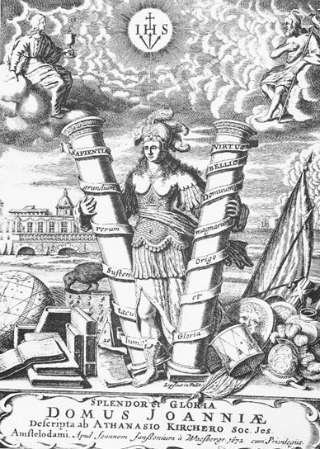 Joachin and Boaz were two pillars found in the Bible.  The Bible is almost entirely symbolic in content.  In Kings, we find a description of the building of Soloman’s Palace and it is this description [see observations] which mentions Boaz and Joachin.  These were two bronze  pillars, that stood in the porch of Solomon's Temple, the first Temple in ‘Jerusalem’.

In this context, Boaz and Joachin are Twin pillars ad thus they are extremely special because they too go to the symbolic sun and moon.

This symbolism is found in numerous pictures including the one above from the work of Athanathius Kirchner, a Jesuit priest who appeared not to entirely understand the symbolism involved, but thankfully documented the description given to him nonetheless.

His interpretation has the ‘mother’  on the left with the moon, the ‘father’ on the right with the sun and the two tunnels or columns or portals leading there.  The Stars and the Eye of God are shown in the centre. Wisdom [Sophia]  is represented as a goddess holding the two pillars, thus tying in the whole scheme with the three columns of the Sephirot. 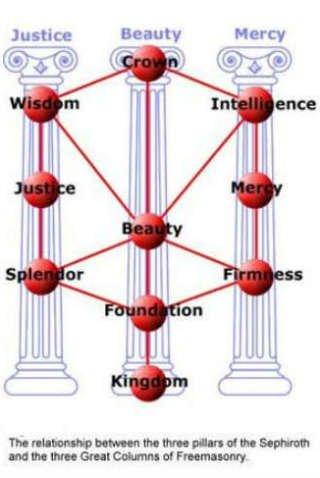 Where three pillars occur together, the symbolism is related to the Sephirot.  The symbolism has changed over time to be virually meaningless, but I will provide a description and then show you the real meaing. 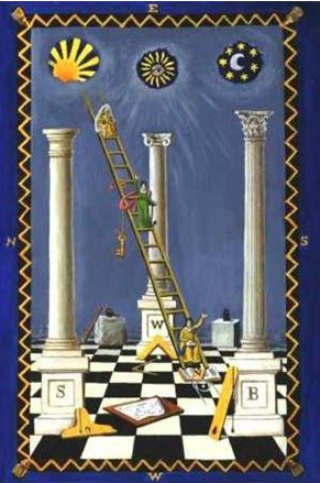 The idea of the three columns has been used in Gnostic and Hermetic beliefs and has also as a result been used in Freemasonry.

Below is a Masonic tracing board.  Tracing boards are painted or printed illustrations depicting the various emblems and symbols of Freemasonry. They can be used as teaching aids during the lectures that follow each of the three Masonic Degrees, when an experienced member explains the various concepts of Freemasonry to new members. They can also be used by experienced members as self-reminders of the concepts they learned as they went through their initiations.  In some respects they have a similar role to the tarot cards.

This board shows  three columns (Ionic, Doric, and Corinthian) or pillars.

The card incorporates the sun and moon symbolism - the central route is the route to the stars – wisdom and illumination.

The card also shows the ladder, and the black and white squares of the chess board – the theory of contrast and balance and around the edges the toothed design common in many visions as mountain ranges or as spikes or saw wedges etc.

The cardinal directions are also faintly observable around the edge.

So in totality it symbolically describes the means by which one becomes a 'god' - the path of wisdom.  Now for the final diagram to tie it all together.  The central column goes directly from the composer to the will - the composer takes over operations. 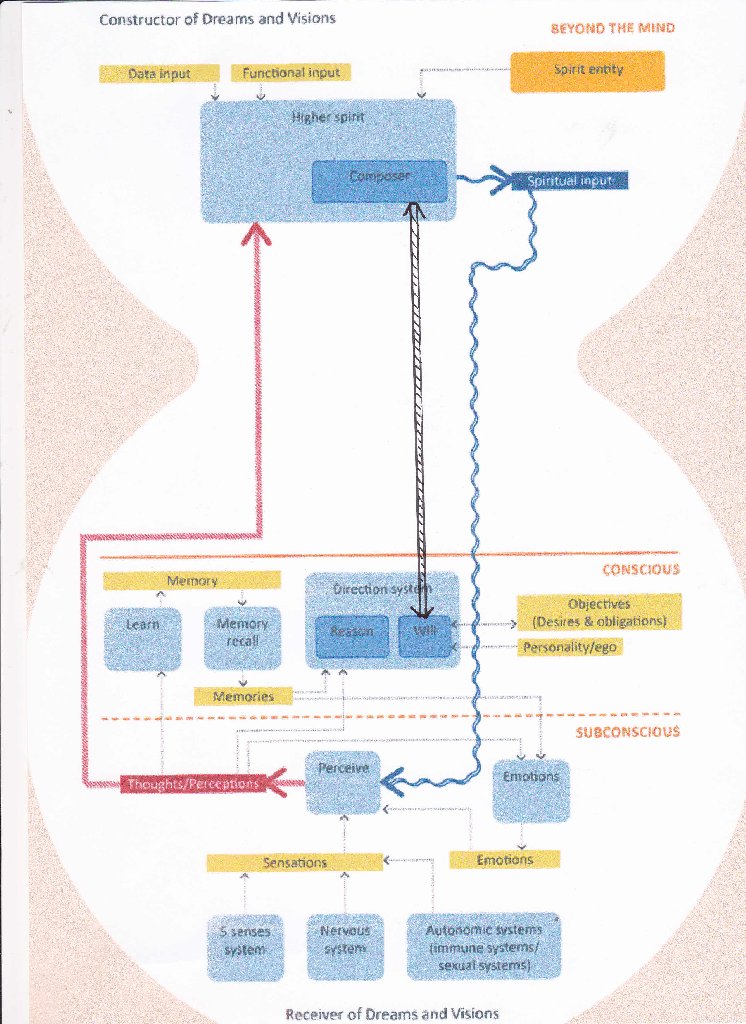