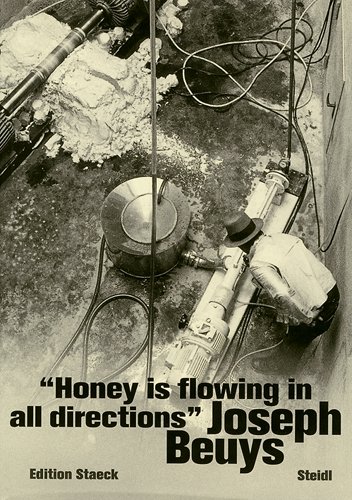 “At one place the honey was fixed. Therefore, I had the impression that there must thus be something like a brain, like a head, where something above damming up the head function takes over, above in the roof of the Documenta.”

The honey circulation system with its steel container "heart" represented the human circulation system and related life of feeling-even as Steiner describes an analogy between bees and blood cells or blood circulation in the second lecture on bees. Finally, there was the 220 pounds of fat placed into continual motion by

"two motors, which I had coupled with a large copper cylinder which continuously moved the fat at high speed; and that was for me the representative of the will,.. ."

Of course, this trinity also represented Beuys's Theory of Sculpture, with the "head" as the form pole, the will as the "chaotic" pole, and feeling as the movement element of circulation between these two. Following Steiner; this psychosomatic three-foldness also was echoed at the spiritual level in three small, empty bronze pots that Beuys had "doubly cleaned" and placed in a corner in the "engine room" as a sign for those higher spiritual sources of thinking, feeling, and willing that Steiner called Imagination, Inspiration, and Intuition.