A Tower is the symbolic equivalent of a Database or a Data store.

There are Towers in the spiritual world beyond the cones, attached to both Cities and Palaces because a system has data.  Every Intelligence effectively has its Tower or towers, as such by seeing both a Palace with its Tower in a vision, for example, we are see the system of the Intelligence in its entirety – data and function.

This is the positive side of the tower symbolism - an accessible store of wisdom within the spiritual world.

Robert Browning – from Two in the Campgna

Such life here, through such lengths of hours,
Such miracles performed in play
Such primal naked forms of flowers
Such letting Nature have her way
While Heaven looks from its towers

But we can have Towers too and here they represent our own collections of data.  Occasionally symbolically they are seen attached to castles, again a rather neat and consistent symbolism.

In correct usage therefore a Tower is a part of Memory –  and represents the database of facts, the Database of learn functions and all our belief systems.

As a consequence it can represent a block to spiritual progress.

If the tower has the look of a library with large interconnecting rooms it is memory.

Whether consciously or unconsciously, man through the ages has created towers, which appear to have no use than a symbol of either a creative urge or a search upwards for heaven.  Always higher and higher – and it is not for the view, it is entirely symbolic.

Some poets and writers, for example, have even created real towers in an attempt to mirror their creative output.  Yeat's house had a tower, as did Vita Sackville-West and Harold Nicholson in their house at Sissinghurst.  Vita even wrote from the tower, she had a complete library and study in the tower.  But these towers were small and in the case of most writers the symbolism was known - a tower is not the way to get inspiration, but it at least was a symbol of what you had tried to achieve.

Occasionally the great edifices of learning we build up look so high and take us so far away from reality that we actually believe we are nearer the spiritual world.  In this case we have built Ivory Towers.

But an Ivory tower takes us nowhere, only Perceptions take us spiritually to inspiration and wisdom and we have to destroy Ivory towers or any other sorts of edifices of learning, to get any meaningful forms of spiritual input.

In the diagram below I have shown the soul cone.  The levels and layers are marked out in colour – fire, air, water and earth.

Above the thin neck of the cone that is often represented as a bridge lies the Higher spirit and the aether levels.  Although one can use bridges to travel from cone to cone, access to higher Intelligences and palaces with real wisdom is via this narrow ‘passage’.

Perceptions are used by the spiritual world in order to Monitor the physical world.  Perceptions are accumulated and summarised, thus they provide a spiritual means of going beyond the cone.

The only disadvantage with this route is that we may end up in the area that all this sorting and refining and extraction takes place. Robert Monroe ended up here on a few occasions and he said the ‘noise’ was terrible and the impressions none too pleasant.  [He called I believe the M field].

There are two Pillars or Columns, one for input and one for output, this is shown below, but I emphasise these are known as the Twin Pillars or the Twin Columns.  Symbolically they may also be called the Twin horns.

So in reality there are always two apparent towers that go in and out of our soul cones.  But symbolically these are not called Towers - they are Pillars and what we have are Twin Pillars.

And this is where the symbols of the twin pillars comes from – spiritual input and spiritual output.

I now want you to have a look at my photo of Temple II in Tikal Guetamala.  All Mayan temples were built to mirror the spiritual world with some temples representing the levels above the cone level and some below.  This temple is a representation of a soul cone and it has the four levels and layers and the portal through two columns to the symbolic spiritual world and the Higher spirit.  Not Towers - columns. 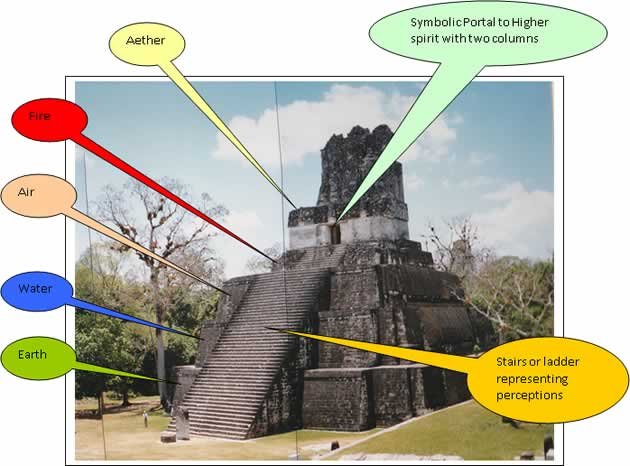 So this leaves us with the symbolism of the Twin Towers.  In some senses the building of twin towers is an act of extraordinary arrogance and ego symbolically.  It is stating in symbolic terms that we are capable of reaching spiritual heights and wisdom via other means than spiritual input and output, through knowledge and cleverness, rather than through spiritual pursuits.

It is stating, in no uncertain terms, stuff the spiritual world, we are self sufficient.  Now we have our big memories, ability to learn and our power of reasoning we don't need your wisdom and inspiration, we can manage perfectly well by ourselves.

Whether there is one large tower or two towers the message is very much the same.  It is I suppose symbolically equivalent to landing on the Moon, trampling it and leaving rubbish on it; or letting soldiers trample all over a pyramid or ziggurat.   The Masculine has won over the feminine and the Intellect is king.  Dangerous stuff - pride comes before a fall.

The Tower of Babel was one such tower.  And I have added a few more examples of Towers as symbolic of the ego in the observations.