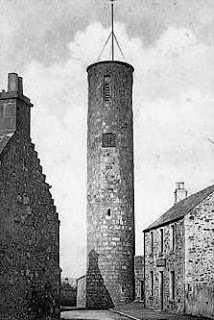 Round towers are stone towers of a type found mainly in Ireland, but with two in north-eastern Scotland and one on the Isle of Man. . The two Pictish towers  in Scotland are the Brechin Round Tower and the Abernethy Round Tower.

Surviving towers range in height from 18 metres (59 ft) to 40 metres (130 ft), and 12 metres (39 ft) to 18 metres (59 ft) in circumference; that at Kilmacduagh being the highest surviving in Ireland (and leaning 1.7 metres (5 ft 7 in) out of perpendicular). The masonry differs according to date, the earliest examples being uncut rubble, while the later ones are of neatly joined stone work. The lower portion is solid masonry with a single door raised two to three metres above, often accessible only by a ladder. Within, in some, are two or more floors (or signs of where such floors existed), usually of wood, and it is thought that there were ladders in between. The windows, which are high up, are slits in the stone. The cap (roof), is of stone, usually conical in shape, although some of the towers are now crowned by a later circle of battlements.

The main reason for the entrance-way being built above ground level was to maintain the structural integrity of the building. The towers were generally built with very little foundation. The tower at Monasterboice in Ireland has an underground foundation of only sixty centimetres. Building the door at ground level would weaken the tower. The buildings still stand today because their round shape is gale-resistant and the section of the tower underneath the entrance is packed with soil and stones. 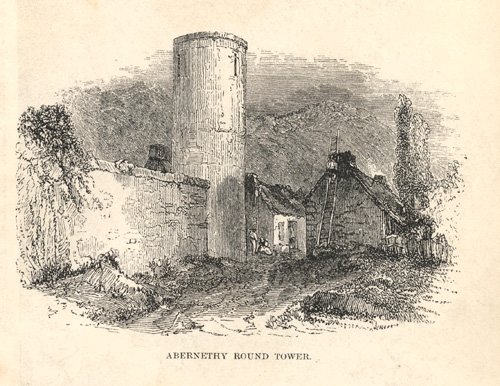 An older picture shows the tower to be much smaller, have the additions
destroyed its resonant frequency?

The distance from the ground to the raised doorway is somewhat greater than that from the first floor to the second; thus large, rigid steps would be too large for the door. Excavations in the 1990s, revealing postholes, confirm that wooden steps were built. However, the use of ladders prior to the construction of such steps cannot be ruled out.

In Ireland about 120 examples are thought once to have existed; most are in ruins, while eighteen to twenty are almost perfect.  Famous examples are to be found at Devenish Island, and Glendalough, while that at Clondalkin is the only Round Tower in Ireland to still retain its original cap.

Professor Phil Callahan has suggested that these towers, made of highly diamagnetic stone, served exotic/occult functions. Their inner floor is made of dirt and raised off the ground at varying levels, which Callahan theorizes was to allow fine tuning of the resonant frequency inside the tower by varying the height of the inner space.

They were in essence a building used to obtain various forms of spiritual experience, the experience partly being dependent on the frequency used. 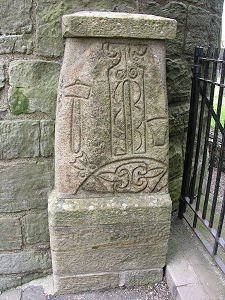 In Scotland, the Abernethy tower has a Pictish stone positioned right in front of this round stone tower – a bit like an advertising hoarding. Here you clearly see a tuning fork and hammer. If both are drawn to scale, then the tuning fork is quite large. A hammer would be needed to strike so large a fork. This fork was likely made of bronze, just as bells are made of bronze, due to the ideal stiffness and resilience of the material allowing for prolonged vibrations. Other materials like stone, iron, copper, and wood are unsuitable. Also, the Pict/Celt civilization traces back to Bronze Age.

To the right of the fork is what looks like an anvil, the symbol of the Smith.  Place the tuning fork on the anvil and this provides the base for the fork as well as an extra resonating surface.

At the bottom is an abstract symbol crossed by a V rod.  We have suggested that the abstract symbols were used to record the cymatic patterns produced by sound.  This pattern may have no specific sound attached to it, it may simply denote that sound was used if the tuning fork symbol was not clear, but it may indicate a specific tone, thus meaning ‘get your spiritual experience here, we use tone XX and a tuning fork to give you the ride of your life!!!’