Hypnerotomachia Poliphili - Egg and the Labyrinth

Water in this case is symbolically spirit 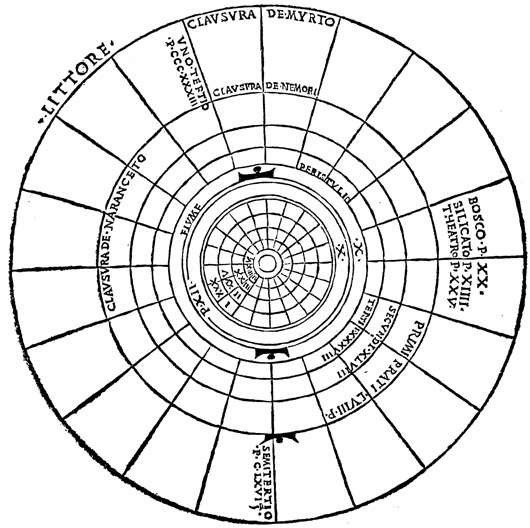 Leaving Thelemia behind, we leapt nimbly up the spiral staircase to the flat top, where she showed me, and with divine eloquence, a wide circular garden made in the form of a complex and intricate labyrinth. Its circular paths were not walkable but navigable, for in place of streets there ran rivulets of water.

This was a mysterious place with salubrious meadows and rich soil, pleasant and fertile, supplied with an abundance of sweet fruits and ornamented with generous springs, rejoicing in flowering greenery and offering everywhere solace and recreation.

Logistica said 'I think, Poliphilo that you do not understand the conditions that obtain in this marvellous site. Listen. Whoever enters cannot turn back, but, as you can see clearly, these towers placed here and there divide seven circuits from one another. The great danger run by those who enter is that a deadly dragon, voracious and invisible, dwells in the open entrance of that central tower; and the worst of it is that he lurks now in one place, now in another, yet one cannot see him, and horror of horrors, cannot escape him. He flies to the entrance or to further on, where he has his lair, and devours those who enter; but if he does not kill them between one tower and another, they can pass the sevenfold circuit safely as far as the nearest tower.

You can see on this first tower the title written in Greek, and take heed of it. Those entering here travel on their boat with a following breeze and no trouble or care; fruits and flowers fall into their vessel, and they cover the seven revolutions as far as the second tower with the utmost delight and jollity. Now notice, Poliphilo, the clarity of the air in this first part, how it increases as far as the middle tower, then gradually declines towards the centre until it becomes dark and lightless....