The lighthouse of Alexandria 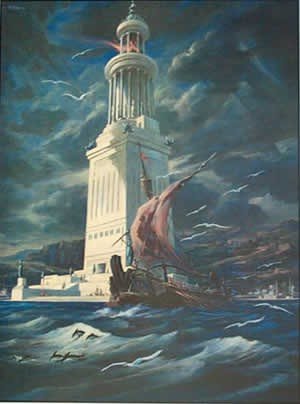 In ancient times, Alexandria was one of the most famous cities in the world. It was founded around a small pharaonic town c. 331 BCE by Alexander the Great. It remained Egypt's capital for nearly a thousand years, until the Muslim conquest of Egypt in 641 CE when a new capital was founded at Fustat (Fustat was later absorbed into Cairo).

Alexandria was known because of its lighthouse (Pharos), one of the Seven Wonders of the Ancient World  and its library (the largest library in the ancient world) - the source of wisdom.

Alexandria had a real lighthouse that sheltered its harbour in ancient times.  Remains of it have been found by archeologists in what is now the harbour of the present day port.  This lighthouse was badly damaged in the earthquake of 956, then again in 1303 and 1323. The fullest description of it comes from the Arab traveller Abou Haggag Youssef Ibn el-Andaloussi, who visited the structure in 1166.

Abou Haggag Youssef Ibn el-Andaloussi
The Pharos rises at the end of the island. The building is square, about 8.5 metres (28 ft) each side. The sea surrounds the Pharos except on the east and south sides. This platform measures, along its sides, from the tip, down to the foot of the Pharos walls, 6.5 metres (21 ft) in height. However, on the sea side, it is larger because of the construction and is steeply inclined like the side of a mountain. As the height of the platform increases towards the walls of the Pharos its width narrows until it arrives at the measurements above

But his description is of an ordinary lighthouse a marker beacon to guide ships into port, as Wikipedia says “The Andaloussi description of the dimensions does not appear to match the Thiersch drawing, the classic painting, or the graphic reconstruction, all of which show buildings with a footprint that would have been a square at least 80 feet (24 m) on a side, based on the scale of surrounding objects”.  At almost the same time as Abou Haggag Youssef Ibn el-Andaloussi gave his description of a physical lighthouse,  the Muslim traveller Ibn Jubayr visited the city in 1183. He said of it that: "Description of it falls short, the eyes fail to comprehend it, and words are inadequate, so vast is the spectacle." It appears that in his time, a church was located on the top.

I think the physical lighthouse was a smaller reconstruction of the spiritual lighthouse that visionaries saw and this is entirely my interpretation – much as many buildings are built in attempt to reconstruct the things seen in visions.

One of the main reasons I suspect the original was spiritual and not physical was that it is legendary, was built by Ptolemy – a legendary figure and includes descriptions which remind one strongly of towers in visions.

The pharos of Alexandria is thus a beacon of wisdom – a symbolic tower of learning, a light in the darkness of ignorance.  It is the spiritual equivalent of the Library at Alexandria, everything that was accumulated and written and stored in the library also became part of the spiritual tower.

Symbolically it was surrounded by a sea of ignorance, and just like an island is built from the chaos of ignorance and lack of knowledge, learning created an island and a tower or database of knowledge and learning.