Zoroastrian - Symbols and concepts - The Tower of Silence

‘Sky burials’ seek to re-enact in ritual form the process the person goes through in symbolic form in the visionary experience of rebirth – more specifically the type of rebirth involving being consumed.  Thus when someone dies, the first stage of death is believed to be exactly the same as a rebirth experience.  The ceremony thus seeks to re-enact the first stage of death on behalf of the person in the hope it will help them exit from the wheel of life – thus avoiding reincarnation.  Interestingly, it largely derives from Tibetan Buddhism, and the shamanic arm of these beliefs [far older than the Buddhist beliefs] however in this case it is the Parsis and other Zoroastrians who have used the symbolic concept.

The following is the description from Wikipedia, dogs are sacred animals to a Zoroastrian.

After death, a dog is brought before the corpse; it should preferably be a “four-eyed” dog (i.e., it should have a spot above each eye, as this is said to increase the efficacy of its look). The rite is repeated five times a day. After the first one, fire is brought into the room where it is kept burning until three days after the removal of the corpse to the Tower of Silence. The removal must be done during the daytime.

The interior of the Tower of Silence is built in three concentric circles, one each for men, women, and children. The corpses are exposed there naked. The vultures do not take long—an hour or two at the most—to strip the flesh off the bones, and these, dried by the sun, are later swept into the central well. Formerly the bones were kept in an ossuary, the astodān, to preserve them from rain and animals. The morning of the fourth day is marked by the most solemn observance in the death ritual, for it is then that the departed soul reaches the next world and appears before the deities who are to pass judgment over it. 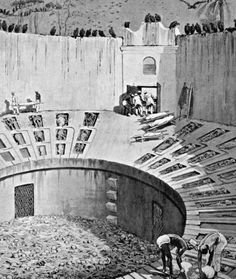 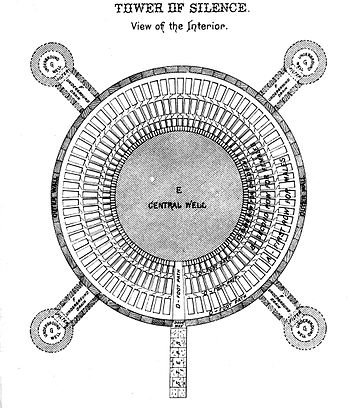 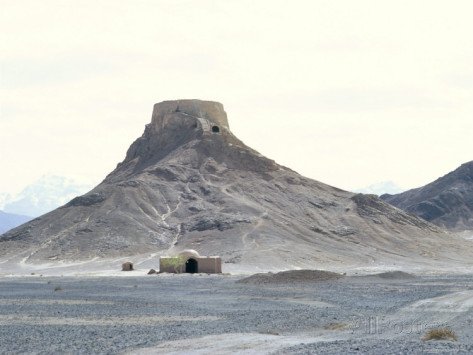