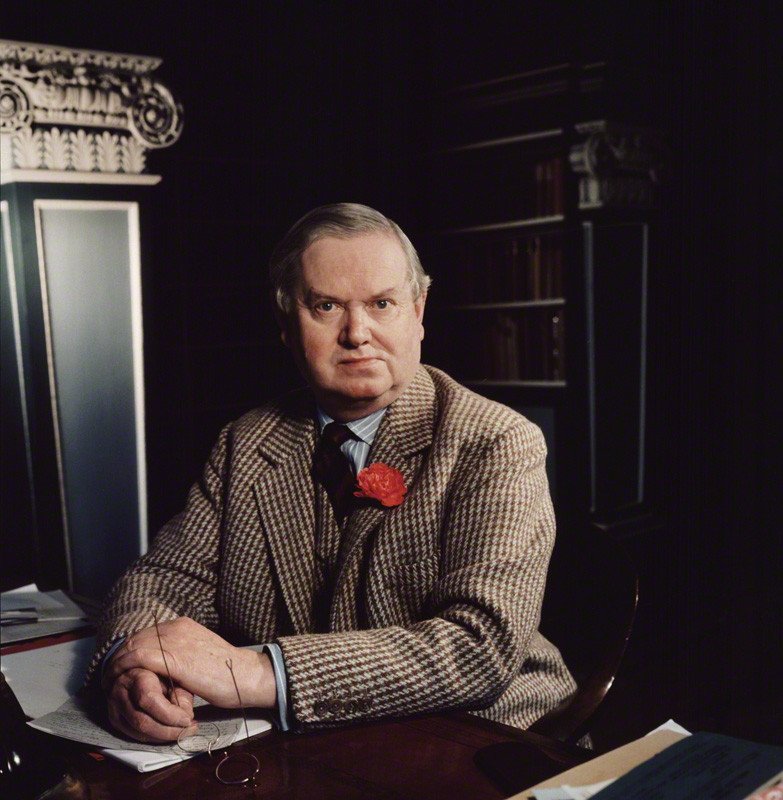 He was also a prolific journalist and reviewer of books. His most famous works include the early satires Decline and Fall (1928) and A Handful of Dust (1934), the novel Brideshead Revisited (1945) and the Second World War trilogy Sword of Honour (1952–61).

Evelyn’s father was a gentle apologetic man, his mother a kindly sincere lady, both of whom he criticised in private and in public.  They had a preference for his brother, Alec, which was undisguised, but it would seem their preference may have been for good reason.  Even in his youth his mother chided him and said he should curb his “quick and unkind tongue”.

Waugh was educated at Lancing College and then at Hertford College, Oxford, where he undertook numerous homosexual relationships usually concurrently, declaring love to each one.  He briefly worked as a schoolmaster before he became a full-time writer.  He also had numerous affairs with women, before, during and after both his marriages, to women married and single.  He does not use the phrase making love, but in his letters refers to rodgering and fucking - including to his wife.  He appears to have been most smitten by those who rejected him, or were unavailable because they were married to his friends. 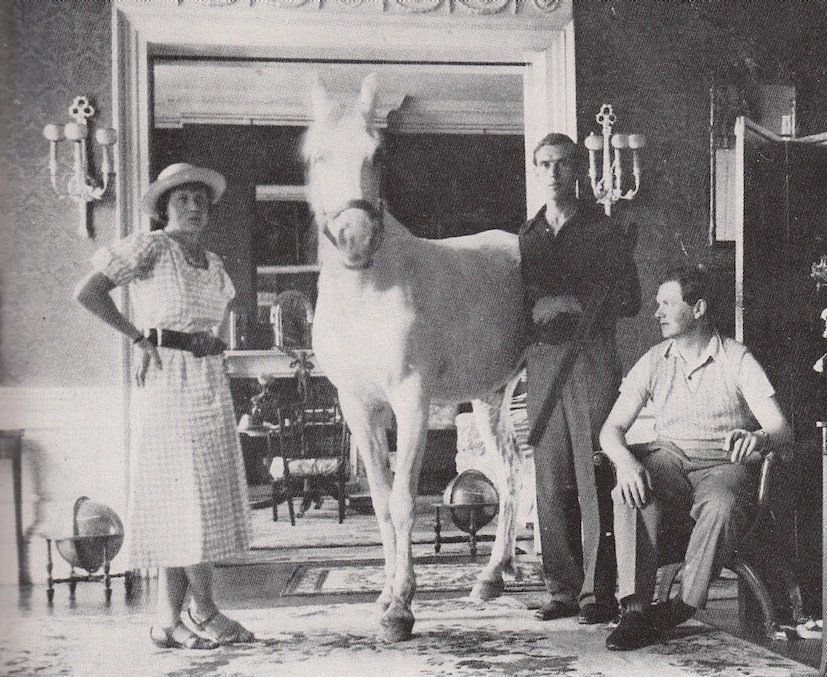 Waugh is on the right smoking a cigar

It was after the failure of his first marriage, that Waugh converted to Catholicism in 1930.  His wife left him for another man.  Evelyn admitted that at the time of writing Vile Bodies he was ‘as near to an atheist as one could be’, but it seems the very public humiliation caused by the break-up of his marriage and the ensuing feeling of emptiness, resulted in his conversion to Roman Catholicism.

When Nancy Mitford asked him how he reconciled his frequent objectionable conduct with being a Christian, Waugh replied that ″were he not a Christian he would be even more horrible″.  In one interesting development associated with his new religion, he wrote a very sympathetic biography on Edmund Campion – a 16th century Jesuit priest who was indicted on 14 November on a charge of having conspired, in Rome and Reims, to raise a sedition in the realm and dethrone the Queen [Queen Elizabeth I]. 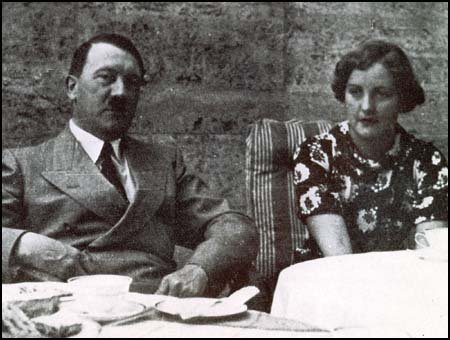 Those who suffered under his pen called him a snob [and worse] and as a young man, he acquired many ‘fashionable and aristocratic friends’ –  rich friends with whom he could stay and be witty as a form of payment for his presence.  “He developed a taste for country house society”.

In the 1930s, he travelled extensively, often as a special newspaper correspondent, in which capacity he reported from Abyssinia at the time of the 1935 Italian invasion.  He was pro-Fascism, as were his friends the Mitfords - according to The Times journalist Ben Macintyre, known as  "Diana the Fascist, Jessica the Communist, Unity the Hitler-lover; Nancy the Novelist; Deborah the Duchess and Pamela the unobtrusive poultry connoisseur".  He had affairs with at least three of them.  He served in the British armed forces throughout the Second World War (1939–1945), first in the Royal Marines and then in the Royal Horse Guards. 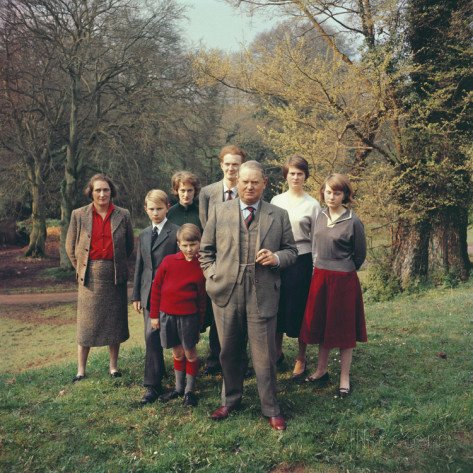 He frequently left his often pregnant wife, Laura, and his seven children in order to gain more experiences and meet more people he could write about.  When one child was born prematurely in 1940, Waugh said he had “seen her when she was dead – a blue slatey colour.  Poor little girl, she was not wanted”.  In 1941, Waugh refused to visit his children during his Christmas leave as he couldn’t  “afford to waste any time on them”.

His opinions about his children were uncharitable as well as untenable. He preferred to avoid them if at all possible, taking his meals in his library, alone. "The presence of my children affects me with deep weariness and depression," he wrote in 1946. And in 1954: "Of children as of procreation – the pleasure momentary, the posture ridiculous, the expense damnable."
"As a parent," wrote Auberon after his father's death, "he reserved the right not just to deny affection to his children, but to advertise an acute and unqualified dislike of them." It was the Waugh way of parenting. 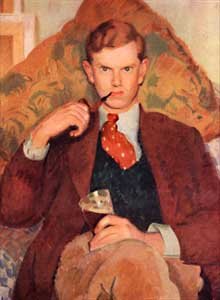 Waugh  “used the experiences and the wide range of people he encountered in his works of fiction, generally to humorous effect”.  In other words, he made his contemporaries laugh - like the Mitfords - and thus is regarded as humorous, but that is if you find the idea of lampooning people funny.  Waugh received a scholarship [one which many others might have valued] to go to Oxford to study history but when his history master was so bold as to suggest it might be a good idea if he turned up to lectures, Waugh immediately formed a dislike for the man so violent that it was reflected in every novel thereafter.  His name was Cruttwell:

"Cruttwell" is a brutal burglar in Decline and Fall, a snobbish Member of Parliament in Vile Bodies, a social parasite in Black Mischief, a disreputable osteopath in A Handful of Dust and a salesman with a fake tan in Scoop.

“Waugh is recognised as one of the great prose stylists of the English language in the 20th century.”  And indeed this is a good description, not inspired, not spiritual - despite his conversion to Catholicism, - but technically a skilled writer, this is clever writing, self-conscious writing, he was a very good observer of his friends, most of whom appear in his books, barely disguised.   It shows that one can still do an intellectually 'clever' job at writing, even when totally cut off from any form of spiritual input, by simply relying on memory.

So why is he on the site?

In the first place he was an alcoholic who freely admitted to having hallucinations.  Generally alcoholics get hallucinations when they try to give up alcohol, but Evelyn had them whilst he was drinking. He had them quite frequently and they were quite unpleasant and real to him.

In 1954 the novelist Evelyn Waugh (1903-1966) set off from England on a cruise ship bound for Ceylon (now Sri Lanka).  A week later, he disembarked at Port Said, Egypt, and travelled overland to Cairo before flying to Colombo.  The reasons behind this capriciousness are outlined in his 1957 quasi-autobiographical novel The Ordeal of Gilbert Pinfold.
“Mr Pinfold, a corpulent English author of some renown, finds the longed-for tranquillity of his own cruise to Ceylon shattered by the intrusion of an unseen cast of voices, musical bands, and a dog.  Unable to distinguish these auditory hallucinations from reality he flees the ship in fear for his life … When the voices follow him even to London he comes to realise what has happened.” 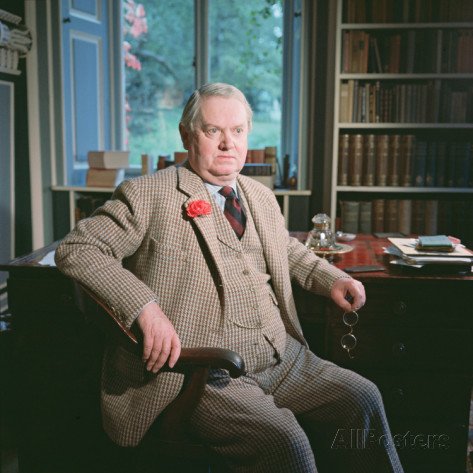 Alcohol is a means of escape and a number of biographers have hypothesised that he was a lonely little boy, a lonely student and a lonely man, who sought alcohol as a means of escape.  But alcohol only serves to cut you off from the spiritual and you can sink into deep depression - which he did.

He shares a lot with Hitler.  An unloved child, though Hitler was abused by his father, who turns to alcohol and drugs to compensate.  Hitler was taking everything from strychnine to amphetamines.

But of equal interest to us on this site, is that he too was a victim of doctor prescribed chloral hydrate, which sent him temporarily mad.

Drugs and alcohol - maybe he was like he was, because of them.

The World to Come: A Poem in Three Cantos - Unpublished, Privately printed by Arthur Waugh in 1916.