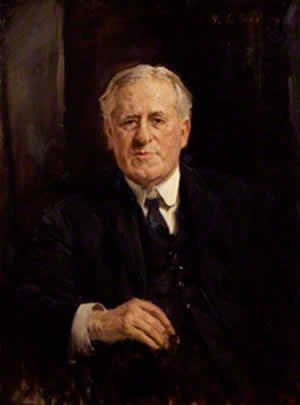 There is nothing superficially to suggest that William had an ounce of spiritual blood in his veins.  He was a prolific poet of the 1890s, and popular in his time for the political content of his verse.  He was described as being  “ very much on the traditionalist wing of English poetry”  as well as having “a gift for resonant phrasing and reiterative rhythms which he mistook (and for 20 years many critics mistook) as a gift for poetry”.
He was often asked to write suitable ‘effusions’ on public occasions, and this made him, on Tennyson's death (1892), a strong candidate for Poet Laureate, but his often extreme views on foreign policy (he was passionately anti-Ottoman) led to him being passed over by the then Prime Minister Lord Salisbury in favour of Alfred Austin, who was “a poor poet but a loyal conservative”.

But what is often overlooked is that William Watson had a nervous  breakdown in 1894.

Furthermore, after the Great War he was largely forgotten, until a number of literary men in 1935 issued a public appeal for a fund to support him in his old age.  When he died the following year, his widow Lady Watson was obliged to seek employment in domestic service. So he was poor, mentally ill and neglected - humiliated.

Wikipedia describes him as “a sad example of a writer who was at first overrated and then neglected because of changing tastes, a misfortune all too common in the twentieth century”.