Waller’s very late poetry, however, reveals a different side to his personality.  We will see why in due course.

At one time greatly admired, his poems have today largely faded into obscurity - with some justification.

Encyclopaedia Britannica
In his early years Waller was  almost destitute of imaginative invention, and his fancy was plain and trite. But he resolutely placed himself in the forefront of reaction against the violence and "conceit" into which the baser kind of English poetry was descending.

Educated at Eton, he obtained a scholarship to the University of Cambridge and was admitted a fellow-commoner of King's College, Cambridge on 22 March 1620.  He left without a degree, primarily because, at 18, he was made the MP for Agmondesham, a borough in Buckinghamshire.

For most of his life, he was involved in politics and politic intrigue fuelled by money.  His own fortune was large, and all his life Waller was a wealthy man.

Waller's first 'notable' action was his surreptitious marriage with a wealthy ward of the Court of Aldermen, in 1631. He was brought before the Star Chamber for this offence, and heavily fined. After bearing him a son and a daughter at Beaconsfield, Mrs Waller died in 1634. 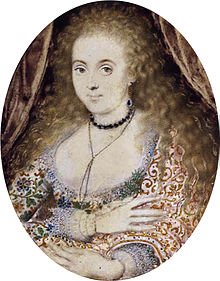 In about 1635 he met Lady Dorothy Sidney, eldest daughter of Robert Sidney, 2nd Earl of Leicester, who was then eighteen years of age. He formed a romantic passion for this girl, whom he celebrated under the name of Sacharissa. She rejected him, and married Henry Spencer, 1st Earl of Sunderland in 1639. Disappointment is said to have made Waller temporarily insane.

And it would seem he was rejected by a great number of other young ladies, many of whom appear in his poetry under coded names.  He eventually married again to Mary Bracey of Thame.

His next unfortunate activity was ‘an extraordinary and obscure conspiracy’ against Parliament, in favour of the King, which is known as "Waller's Plot".  On 30 May 1643,  however, he and his friends were arrested.

In the terror of discovery, Waller confessed "whatever he had said heard, thought or seen, and all that he knew... or suspected of others", and “certainly cut a poor figure compared to his fellow conspirators who were unwilling to betray their principles”. Waller was called before the bar of the House in July, and made an abject speech of recantation. His life was spared and he was committed to the Tower of London, but, on paying a fine of £10,000, he was released and banished from the realm in November 1643. His fellow conspirators were less fortunate, Richard Challoner and Waller's brother in law, Nathaniel Tomkins, were executed on 5 July 1643. 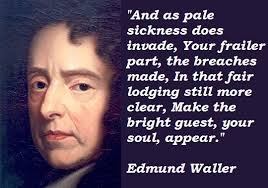 He and Mary escaped to Calais, afterwards taking up his residence at Rouen. In 1645 the Poems of Waller were first published in London, in three different editions.  They are unremarkable.  In 1646 Waller travelled in Switzerland and Italy. During the worst period of the exile Waller was obliged to sell his wife's jewels. At the close of 1651 the House of Commons revoked Waller's sentence of banishment, and he was allowed to return to the UK.

Waller then entered the House of Commons again in 1661, as M.P. for Hastings, and Burnet has recorded that for the next quarter of a century "it was no House if Waller was not there." After the death of his second wife, in 1677, Waller retired to his house  Hall Barn at Beaconsfield, and though he returned to London, he became more and more attached to the retirement of his woods, "where," he said, "he found the trees as bare and withered as himself." 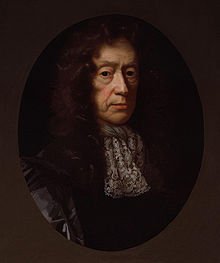 In 1685, two years before his death at 81, Waller's  Divine Poems was released. The final collection of his works is dated 1686.

It appears that at last he had found inspiration fuelled by rejection, humiliation, grief, and the loneliness and isolation of his exile.

Waller bought a cottage at Coleshill, where he was born, meaning to die there; "a stag," he said, "when he is hunted, and near spent, always returns home."

He actually died, however, at Hall Barn, with his children and his grandchildren about him, on the 21st of October 1687.

More of his Poetical works can be found via Project Gutenberg

The observations principally cover his Divine poems, one of which is Divine Love, which is organised as follows:

Note that this poem is quite likely to enrage everyone who does not agree with the idea of 'God', but with an open mind, the poems are interesting, being both a reflection of their times and also having some timeless points to make about love and its effects on people.  It is not all it seems - persevere:

The fear of hell, or aiming to be bless'd,
Savours too much of private interest.........

To love is to believe, to hope, to know;
'Tis an essay, a taste of heaven below!

Weak though we are, to love is no hard task,
And love for love is all that Heaven does ask.
Love! that would all men just and temp'rate make,
Kind to themselves, and others, for His sake.