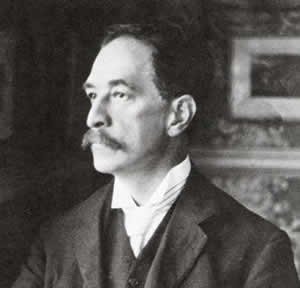 Louis Wain (1860 – 1939) was an English artist.  He specialized in drawing animals and country scenes, and worked for several journals including the Illustrated Sporting and Dramatic News, where he stayed for four years, and the Illustrated London News, beginning in 1886. Through the 1880s, Wain's work included detailed illustrations of English country houses and estates, along with livestock he was commissioned to draw at agricultural shows. His work at this time includes a wide variety of animals, and he maintained his ability to draw creatures of all kinds throughout his lifetime. At one point, he hoped to make a living by drawing dog portraits.  He is however perhaps best known for his drawings of cats and kittens.

His interest in cats sprung from a stray black and white kitten named Peter that Louis and his wife Emily took into their home, after hearing him mewing in the rain one night. Wain taught him tricks, such as wearing spectacles and pretending to read, in order to amuse his wife. He began to draw Peter and from these early beginnings his interest in cats grew.  He later wrote of Peter, "To him, properly, belongs the foundation of my career, the developments of my initial efforts, and the establishing of my work." Peter can be recognized in many of Wain's early published works.

In 1886, Wain's first drawing of anthropomorphised cats was published in the

Christmas issue of the Illustrated London News, titled A Kittens' Christmas Party. The illustration depicted 150 cats, many of which resembled Peter, doing things such as sending invitations, holding a ball, playing games, and making speeches, spread over eleven panels. The cats were on all fours, unclothed, and without the variety of human-like expression that would characterize Wain's later work.

Later in his life, his pictures became progressively more colourful abstract and 'psychedelic' in character at a time when psychedelia was not known.  It is this change that has prompted a number of psychiatrists to speculate that he may have suffered from schizophrenia. Of course the interesting question then remains – what brought it on? 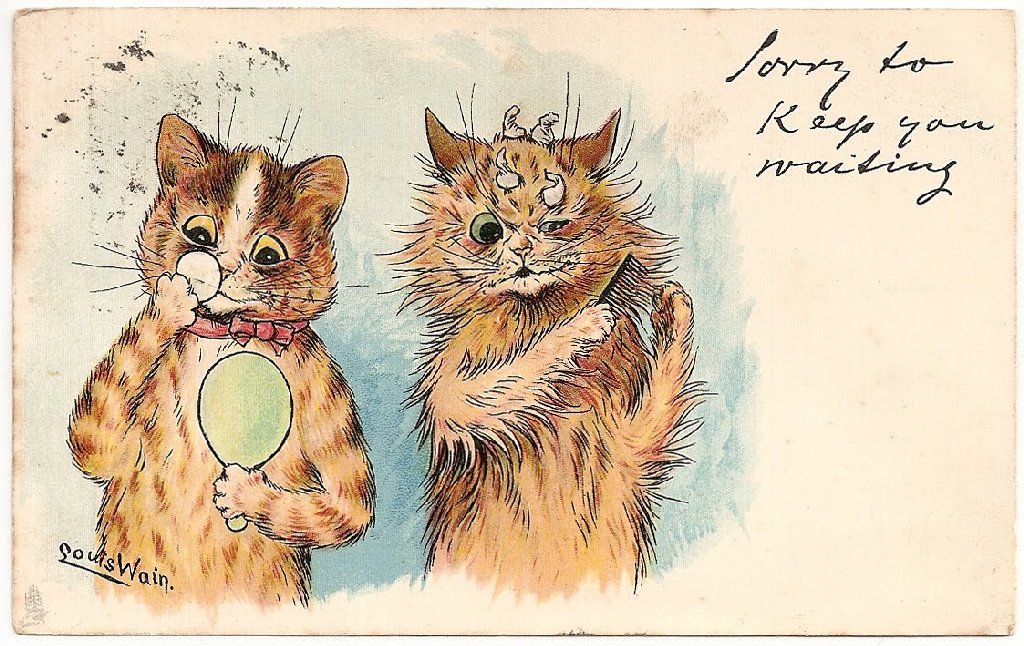 Louis William Wain was born  in London.  At the age of thirty, his youngest sister was certified as insane, and admitted to an asylum. Thus there is the hint that inherited genes may have played a part. Wain was also born with a cleft lip  So we have the added possibility of abnormal brain formation – a feature I have generically described as brain damage, as it is not caused by a difficult birth or being born premature.

At the age of 23, Wain married his sisters' governess, Emily Richardson, who was ten years his senior. Emily soon began to suffer from breast cancer, and died only three years into their marriage. Thus if we trace the start of his flights into another world, it is this event that is the defining factor.  Grief yet again, is a major mechanism. 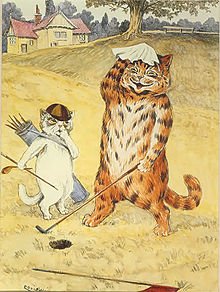 Wain's work, after Emily's death, became progressively more fantastic and centred around the one creature left in his life that he loved – Peter.  His cats began to walk upright, smile broadly and use other exaggerated facial expressions, and would wear sophisticated, contemporary clothing. Wain's illustrations showed cats playing musical instruments, serving tea, playing cards, fishing, smoking, and enjoying a night at the opera.

Wain was a prolific artist over the next thirty years, sometimes producing as many as several hundred drawings a year. Thus although the diagnosis of psychiatrists may be schizophrenia, there is more to suggest that he had a touch of mania.  He illustrated about one hundred children's books, and his work appeared in papers, journals, and magazines, including the Louis Wain Annual, which ran from 1901 to 1915.

What is most intriguing about him, is that he satirised human behaviour using cats as the medium of portrayal.  It is as if he rejected humans because he subconsciously associated them with pain and instead turned all his love towards cats.  In 1898 and 1911 he was chairman of the National Cat Club, for example, and he was involved with several animal charities, including the Governing Council of Our Dumb Friends League, the Society for the Protection of Cats, and the Anti-Vivisection Society.

Wain was described as modest, trusting, mild mannered and easily exploited. He often sold his drawings outright, retaining no rights over their reproduction. He was easily misled, and occasionally found himself duped by the promise of a new invention or other money-making scheme. This simply led him to distrust humanity even more.

After his mother's death, his mental instability became far more prominent.  He had always been considered “quite charming, but odd, and often had difficulty in distinguishing between fact and fantasy” but after this event  he began to suffer from paranoia. He became hostile and suspicious, even towards his sisters.  He began wandering the streets at night, rearranging furniture within the house, spending long periods locked in his room, writing incoherently.

Some speculate that Wain's mental problems may have been exacerbated by toxoplasmosis, a parasitic infection that can be contracted from cats. Thus there is a tragic irony in all this if true.

When his sisters could no longer cope with his erratic and occasionally violent behaviour, he was finally committed, in 1924, to a pauper ward of Springfield Mental Hospital in Tooting. After appeals from such figures as H. G. Wells, Wain was transferred to the Bethlem Royal Hospital in Southwark, and again in 1930 to Napsbury Hospital near St Albans in Hertfordshire, north of London. This hospital was relatively pleasant, with a garden and colony of cats, and he spent his final 15 years there in peace.

While he became increasingly deluded, his erratic mood swings subsided, and he continued drawing for pleasure. His work from this period is marked by bright colours, flowers, and intricate and abstract patterns, though his primary subject remained the same - cats!

The arguments continue to rage as to what he did suffer from but in the end the arguments are pointless.  Wain was an extremely sensitive 'right brained' man.  He probably had brain damage some of which might have been inherited, some which might have been caused by damage in the womb and some of which was caused by the extreme overload of emotions he suffered from grief at the loss of his wife and mother and the repeated betrayals he experienced from others.  We also don't know when Peter died – that might have been the last straw.

H. G. Wells said of him, "He has made the cat his own. He invented a cat style, a cat society, a whole cat world. English cats that do not look and live like Louis Wain cats are ashamed of themselves."