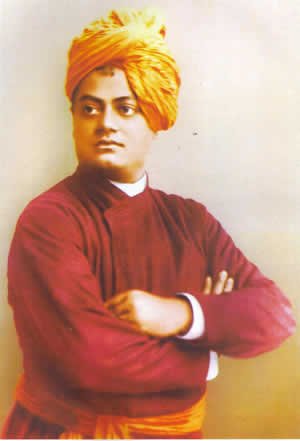 Swami Vivekananda (12 January 1863– 4 July 1902), was an Indian Hindu monk and chief disciple of the 19th-century mystic Ramakrishna.  Although I have classified him as a religious person, he was also a writer, poet and painter.

He was a key figure in the introduction of the Indian philosophies of Vedanta and Yoga to the Western world and is credited with raising interfaith awareness, bringing Hinduism to the status of a major world religion during the late 19th century. He was also a major force in the revival of Hinduism in India.

Born into an aristocratic Bengali family of Calcutta, Vivekananda was inclined towards spirituality.  His grandfather, for example, was a Sanskrit and Persian scholar who left his family and became a monk at age twenty-five.  As a student, he was interested in a wide range of subjects, including philosophy, religion, history, social science, art and literature.   He was also interested in Hindu scriptures, including the Vedas, the Upanishads, the Bhagavad Gita, the Ramayana, the Mahabharata and the Puranas. He was trained in Indian classical music.

Perhaps more intriguingly he studied Western logic, Western philosophy and European history at the General Assembly's Institution (now known as the Scottish Church College) covering the work of David Hume, Immanuel Kant, Johann Gottlieb Fichte, Baruch Spinoza, Georg W. F. Hegel, Arthur Schopenhauer, Auguste Comte, John Stuart Mill and Charles Darwin.  The principal of the General Assembly's Institution  wrote, "Narendra [his real name] is really a genius. I have travelled far and wide but I have never come across a lad of his talents and possibilities". 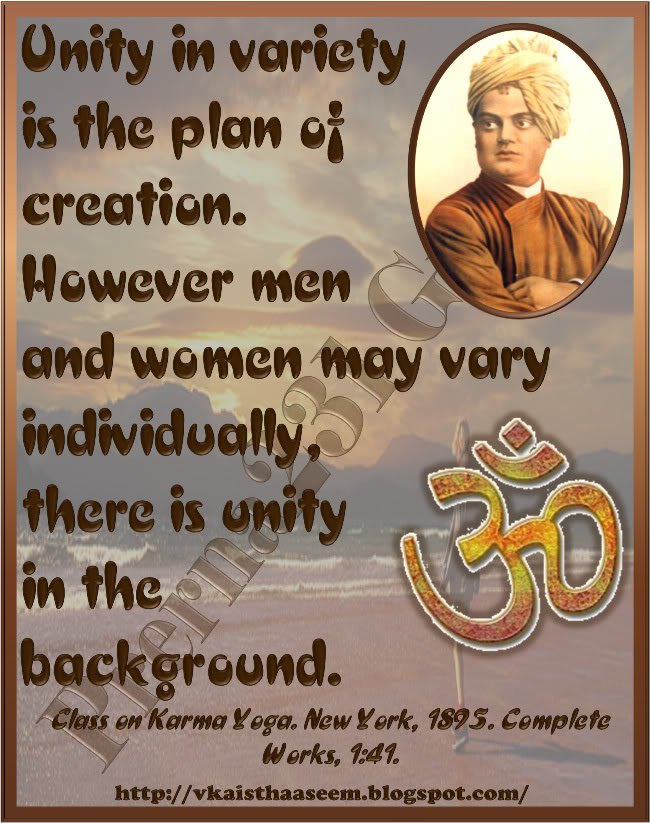 Early in his life, Vivekananda became a member of a Freemasonry lodge and a breakaway faction of the Brahmo Samaj led by Keshub Chandra Sen and Debendranath Tagore.  But the man who was to influence Vivekananda most was Ramakrishna.

Vivekananda’s first introduction to Ramakrishna occurred in a literature class in General Assembly's Institution when he heard Professor William Hastie lecturing on William Wordsworth's poem, The Excursion.   While explaining the word "trance" in the poem, Hastie suggested that his students visit Ramakrishna to understand the true meaning of trance. And Vivekananda went.

In late 1881 or early 1882, Vivekananda travelled to Dakshineswar with two friends and met Ramakrishna.  This meeting proved to be a turning point in his life.  Although he did not initially accept Ramakrishna as his teacher and rebelled against his ideas, he was attracted by his personality and began frequently visiting him at Dakshineswar.   He initially saw Ramakrishna's ecstasies and visions as "mere figments of imagination" and "hallucinations". As a member of Brahmo Samaj, he opposed idol worship, polytheism and Ramakrishna's worship of Kali.   He even rejected the Advaita Vedanta of "identity with the absolute" as blasphemy and madness, and often ridiculed the idea. He tested Ramakrishna, who faced his arguments patiently: "Try to see the truth from all angles", he replied. 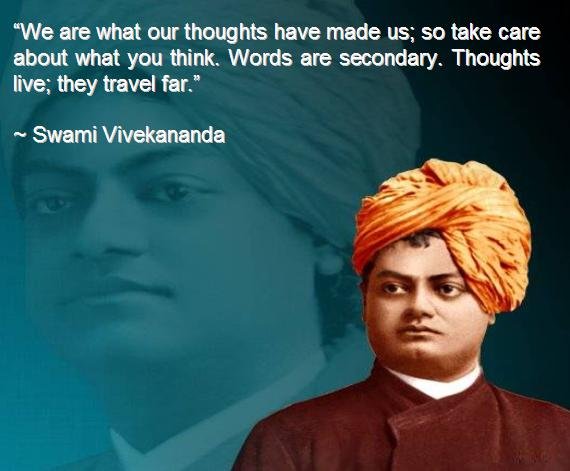 Gradually the tide turned and Vivekananda eventually renounced his normal life and became a disciple of Ramakrishna.

In 1885, Ramakrishna developed throat cancer, and was transferred to Calcutta and (later) to a garden house in Cossipore.   Vivekananda and Ramakrishna's other disciples took care of him during his last days, and Narendra's spiritual education continued. At Cossipore, he experienced Nirvikalpa Samadhi.  Ramakrishna died in the early-morning hours of 16 August 1886 in Cossipore.

And from that moment Vivekananda determined that he would continue the work Ramakrishna had started.  He founded a small monastic order and lived the life of a semi-ascetic.  In 1888, he left the monastery as a Parivrâjaka— the Hindu religious life of a wandering monk, "without fixed abode, without ties, independent and strangers wherever they go".  He travelled extensively in India for five years, visiting centres of learning and acquainting himself with diverse religious traditions, living primarily on bhiksha (alms). 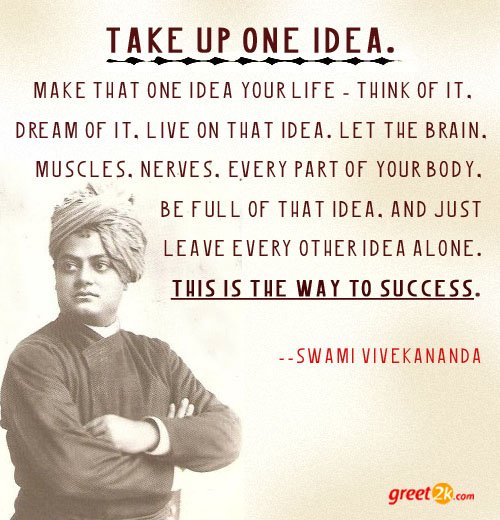 He later represented India at the Parliament of the World Religions, which opened on 11 September 1893 at the Art Institute of Chicago as part of the World's Columbian Exposition.

On this day, Vivekananda gave a brief speech representing India and Hinduism.   Vivekananda quoted two illustrative passages from the "Shiva mahimna stotram":
"As the different streams having their sources in different places all mingle their water in the sea, so, O Lord, the different paths which men take, through different tendencies, various though they appear, crooked or straight, all lead to Thee!" and "Whosoever comes to Me, through whatsoever form, I reach him; all men are struggling through paths that in the end lead to Me."

After the Parliament of Religions, he toured many parts of the US as a guest.  Vivekananda spent nearly two years lecturing in the eastern and central United States, primarily in Chicago, Detroit, Boston, and New York. He founded the Vedanta Society of New York in 1894.   By spring 1895 his busy, tiring schedule had affected his health.   He ended his lecture tours and began giving free, private classes in Vedanta and yoga. 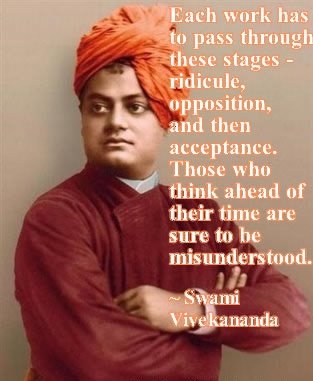 During his first visit to the West he also travelled to England twice, in 1895 and 1896, lecturing there.  From England, Vivekananda visited other European countries including Germany and Italy.

During his stay in Los Angeles, Vivekananda built a retreat to house Vedanta students. He called it Peace retreat or Santi Asrama.  The American headquarters of the Vedanta Society (one of the twelve) in USA is located in Los Angeles.

Vivekananda left for India on 16 December 1896.  While in the West, Vivekananda spoke about India's great spiritual heritage; in India, he repeatedly addressed social issues and became more involved in political issues – the elimination of the caste system, the promotion of science and industrialisation, and the need to address widespread poverty and colonial rule.   On 1 May 1897 in Calcutta, Vivekananda founded the Ramakrishna Mission for social service.

Despite declining health, Vivekananda left for the West for a second time in June 1899. Following a brief stay in England, he went to the United States. During this visit, Vivekananda established Vedanta Societies in San Francisco and New York and founded a shanti ashrama (peace retreat) in California.   He then went to Paris for the Congress of Religions in 1900.

By 1901, he was very ill with asthma, diabetes and chronic insomnia all of which greatly restricted his activity.  He died on 4 July 1902 at 9:10 p.m. while meditating.  He did not reach 40 years old.

“Each soul is potentially divine. The goal is to manifest this Divinity within by controlling nature, external and internal. Do this either by work, or worship, or mental discipline, or philosophy—by one, or more, or all of these—and be free.” 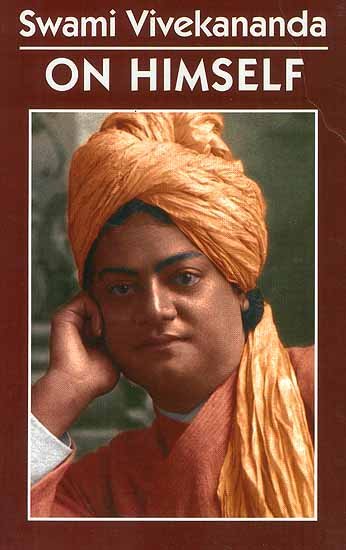 Vivekananda was a powerful orator and writer in English and Bengali; most of his published works were compiled from lectures given around the world. He was…  "A singer, a painter, a wonderful master of language and a poet, Vivekananda was a complete artist."  Published in his lifetime.