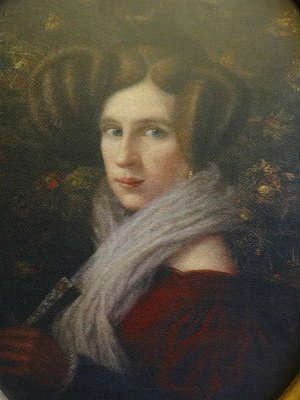 During his early twenties just at the start of his composing career, Verdi was supported by a local merchant called Antonio Barezzi. Because he loved Verdi's music, Barezzi invited Verdi to be his daughter Margherita's music teacher. Verdi and Margherita soon fell deeply in love. They were married on 4 May 1836 when they were in their mid 20s and Margherita very quickly gave birth to two children, Virginia Maria Luigia (March 1837 ) and Icilio Romano (July 1838 ).

Verdi's first opera is now unremembered. It was while he was working on his second opera, Un giorno di regno, that Verdi's wife died. The opera, given in September 1840, was a flop and he almost gave up writing opera altogether. But he was persuaded to write Nabucco and its opening performance in March 1842 made Verdi famous.

Legend (and Verdi's own "An Autobiographical Sketch" of 1879) has it that it was the words of the famous Va pensiero chorus of the Hebrew slaves that inspired him to write music again. All the emotion generated from the grief of his family's loss poured into that opera. It is said that during rehearsals for the opera even the workmen stopped what they were doing to listen.

In the decade following Margherita's death, Verdi wrote 14 operas - Nabucco 1842, I Lombardi/Jerusalem in 1843, Ernani in 1844 and so it continues. It took 7 years before Verdi attempted an opera without a love story. Seven years after Margherita's death, Verdi wrote the opera that is for some, the most original opera that he wrote - Macbeth in 1847. 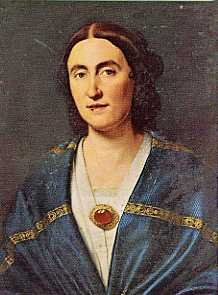 Towards the end of the 1840s, Verdi began a love affair with Giuseppina Strepponi, a soprano described as “ in the twilight of her career”.

Their cohabitation before marriage was regarded as scandalous at the time, but Verdi and Giuseppina eventually married on 29 August 1859 at Collonges-sous-Salève, near Geneva. In 1848, Verdi had bought an estate two miles from his home town and after he married, he made the Villa Verdi at Sant'Agata in Villanova sull'Arda his home until his death.

During these early years with Guiseppina, Verdi created one of his greatest masterpieces, Rigoletto, which premiered in Venice in 1851. Based on a play by Victor Hugo (Le roi s'amuse), the libretto had to undergo substantial revisions in order to satisfy the epoch's censorship, and the composer was on the verge of giving it all up a number of times. The opera quickly became a great success.

Then followed the second and third of the three major operas of Verdi's "middle period": in 1853 Il trovatore was produced in Rome and La traviata in Venice. The latter was based on Alexandre Dumas, fils' play The Lady of the Camellias.

Between 1855 and 1867, an outpouring of great Verdi operas followed, among them Un ballo in maschera (1859), La forza del destino (commissioned by the Imperial Theatre of Saint Petersburg for 1861 but not performed until 1862), and a revised version of Macbeth (1865). Other somewhat less often performed include Les vêpres siciliennes (1855) and Don Carlos (1867). Simon Boccanegra followed in 1857.

Then in 1869, Verdi was asked to compose a section for a requiem mass in memory of Gioachino Rossini. The conductor was to be Angelo Mariani a longtime friend. The soprano Teresa Stolz, was at that time engaged to be married to Mariani, but she left him not long after. As Wikipedia coyly puts it, 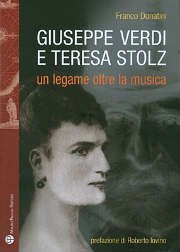 “It was widely believed that she and Verdi had an affair ....and a Florence newspaper criticised them for this in five strongly worded articles. Whether there is any truth to the accusation may never be known with any certainty. However, after Giuseppina Strepponi's death, Teresa Stolz became a close companion of Verdi until his own death.”

The requiem was compiled and completed, but it was cancelled at the last minute and was not performed in Verdi's lifetime. Verdi “blamed this on the lack of enthusiasm for the project by Angelo Mariani”. Five years later, Verdi reworked his "Libera Me" section of the Rossini Requiem and made it a part of his Requiem Mass, honoring the famous novelist and poet Alessandro Manzoni, who had died in 1873.

Verdi's next grand opera, was Aida. Teresa Stolz was associated with both Aida and the Requiem as well as a number of other Verdi roles. The role of Aida was written for her, and although she did not appear in the world premiere in Cairo in 1871, she created Aida in the European premiere in Milan in February 1872. She was also the soprano soloist in the first and many later performances of the Requiem.

Otello, based on William Shakespeare's play, with a libretto written by the younger composer of Mefistofele, Arrigo Boito, premiered in Milan in 1887.
“many critics consider it Verdi's greatest tragic opera, containing some of his most beautiful, expressive music and some of his richest characterizations”

Verdi's last opera, Falstaff, whose libretto was also by Boito, was based on Shakespeare's Merry Wives of Windsor and Henry IV, Part 1 via Victor Hugo's subsequent translation. It was an international success and is one of the supreme comic operas which shows Verdi's genius as a contrapuntist, technically therefore excellent.

In 1897, Verdi completed his last composition, a setting of the traditional Latin text Stabat Mater. This was the last of four sacred works that Verdi composed, Quattro Pezzi Sacri, which can be performed together or separately. They were not conceived as a unit and, in fact, Verdi did not want the Ave Maria published as he considered it an exercise. The four works are: Ave Maria for mixed chorus; Stabat Mater for mixed chorus and orchestra; Laudi alla Vergine Maria for female chorus; and Te Deum for double chorus and orchestra.

Verdi suffered a stroke on 21 January 1901. "As Giuseppe Verdi lay dying in a hotel near the opera house La Scala, Milan, where he had witnessed many a theatrical triumph, the city council ordered that straw be scattered in the street, so that the horses’ hooves would not disturb the maestro."  He gradually grew more feeble and died nearly a week later, on 27 January.

Arturo Toscanini conducted the vast forces of combined orchestras and choirs composed of musicians from throughout Italy at Verdi's funeral service in Milan. To date, it remains the largest public assembly of any event in the history of Italy.