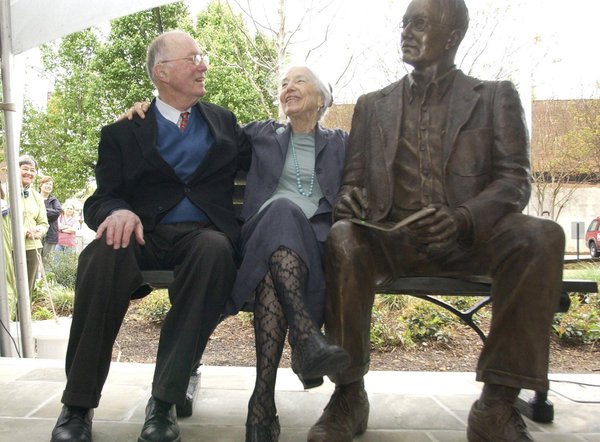 Charles Townes with his wife, Frances, in 2006
after his sculpture was unveiled in his hometown, Greenville

He was known for his work on the theory and application of the maser, on which he got the fundamental patent, and other work in quantum electronics connected with both maser and laser devices. He shared the Nobel Prize in Physics in 1964 with Nikolay Basov and Alexander Prokhorov.  He pioneered the use of masers and lasers in astronomy, was part of a team that first discovered complex molecules in space, and determined the mass of the supermassive black hole at the centre of the Milky Way galaxy.  Between 1966 and 1970, he was chairman of the NASA Science Advisory Committee for the Apollo lunar landing program. 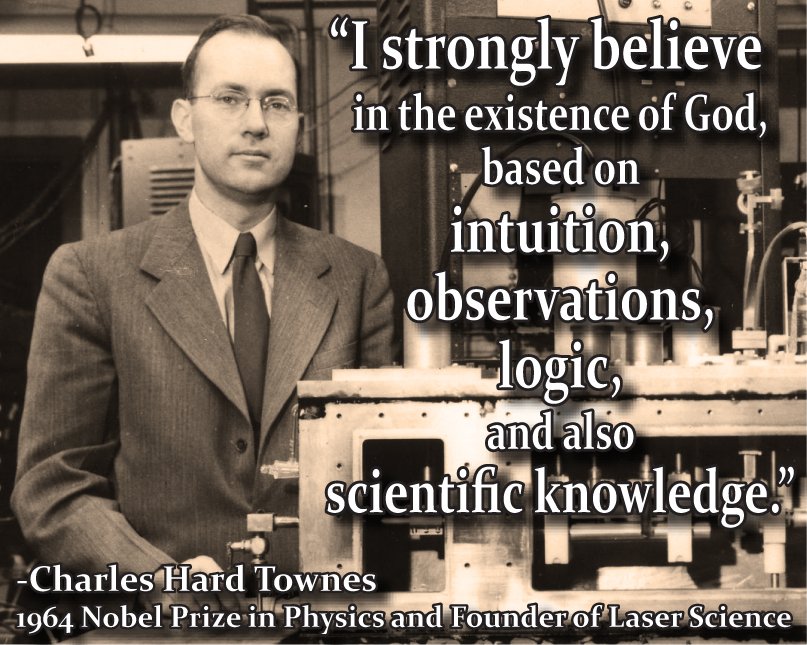 Townes was a member of the United Church of Christ, and considered that "science and religion [are] quite parallel, much more similar than most people think and that in the long run, they must converge".  He also obtained his inspiration from Inner speech at times of relaxation.  The observation covers this approach to his work and his attitude to religion and science.

Townes married his wife Frances H. Brown in 1941 and they had four daughters, Linda Rosenwein, Ellen Anderson, Carla Kessler, and Holly Townes.  He died at the age of 99 in Oakland, California, on January 27, 2015.

The following description comes from the Nobel Prize winners site. 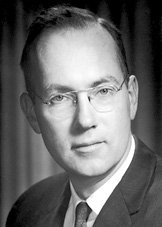 Charles Hard Townes was born in Greenville, South Carolina, on July 28, 1915, the son of Henry Keith Townes, an attorney, and Ellen (Hard) Townes. He attended the Greenville public schools and then Furman University in Greenville, where he completed the requirements for the Bachelor of Science degree in Physics and the Bachelor of Arts degree in Modern Languages, graduating summa cum laude in 1935, at the age of 19. Physics had fascinated him since his first course in the subject during his sophomore year in college because of its "beautifully logical structure". He was also interested in natural history while at Furman, serving as curator of the museum, and working during the summers as collector for Furman's biology camp. In addition, he was busy with other activities, including the swimming team, the college newspaper and the football band.

Townes completed work for the Master of Arts degree in Physics at Duke University in 1936, and then entered graduate school at the California Institute of Technology, where he received the Ph.D. degree in 1939 with a thesis on isotope separation and nuclear spins. 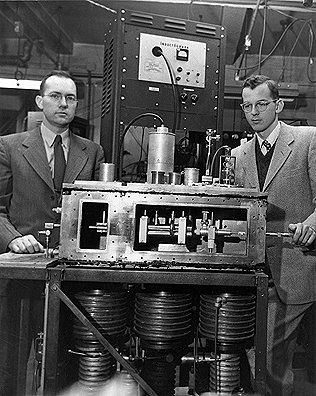 Dr. Charles Townes and his associate James Gordon,
with the first maser, built at the Columbia Radioaton
laboratory in 1953

A member of the technical staff of Bell Telephone Laboratories from 1933 to 1947, Dr. Townes worked extensively during World War II in designing radar bombing systems and has a number of patents in related technology. From this he turned his attention to applying the microwave technique of wartime radar research to spectroscopy, which he foresaw as providing a powerful new tool for the study of the structure of atoms and molecules and as a potential new basis for controlling electromagnetic waves.

At Columbia University, where he was appointed to the faculty in 1948, he continued research in microwave physics, particularly studying the interactions between microwaves and molecules, and using microwave spectra for the study of the structure of molecules, atoms, and nuclei. In 1951, Dr. Townes conceived the idea of the maser, and a few months later he and his associates began working on a device using ammonia gas as the active medium. In early 1954, the first amplification and generation of electromagnetic waves by stimulated emission were obtained. Dr. Townes and his students coined the word "maser" for this device, which is an acronym for microwave amplification by stimulated emission of radiation. 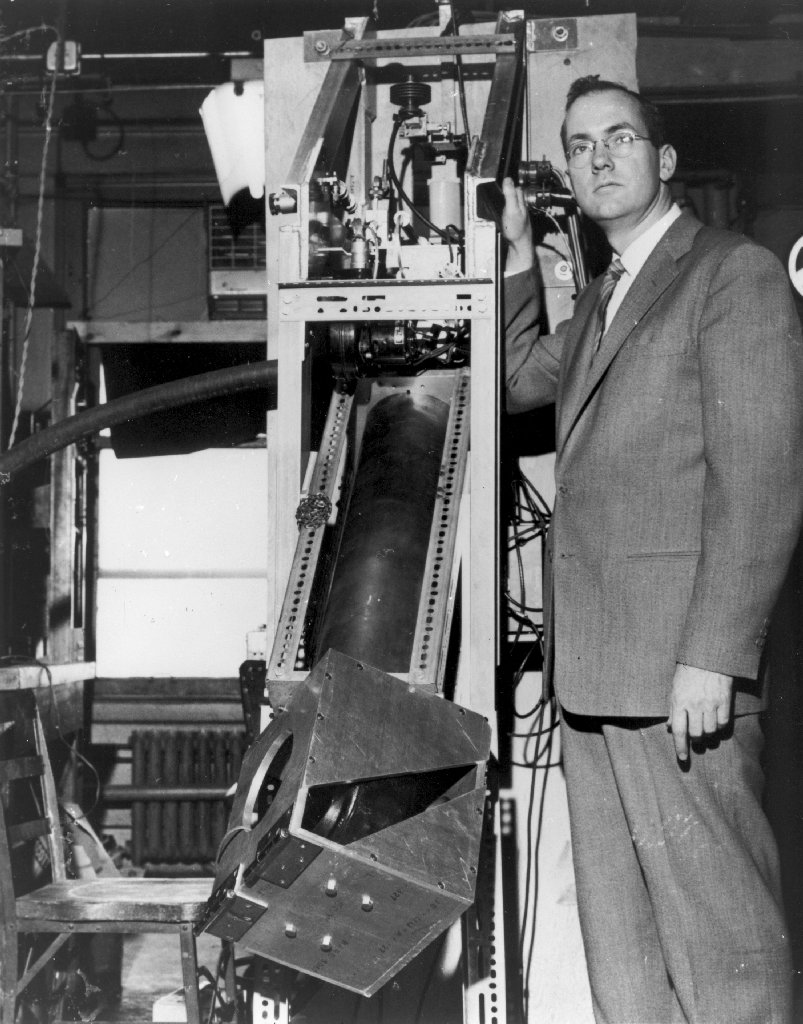 In 1958, Dr. Townes and his brother-in-law, Dr. A.L. Schawlow, for some time a professor at Stanford University but now deceased, showed theoretically that masers could be made to operate in the optical and infrared region and proposed how this could be accomplished in particular systems. This work resulted in their joint paper on optical and infrared masers, or lasers (light amplification by stimulated emission of radiation). Other research has been in the fields of nonlinear optics, radio astronomy, and infrared astronomy. He and his assistants detected the first complex molecules in interstellar space and first measured the mass of the black hole in the center of our galaxy.

Having joined the faculty at Columbia University as Associate Professor of Physics in 1948, Townes was appointed Professor in 1950. He served as Executive Director of the Columbia Radiation Laboratory from 1950 to 1952 and was Chairman of the Physics Department from 1952 to 1955.

From 1959 to 1961, he was on leave of absence from Columbia University to serve as Vice President and Director of Research of the Institute for Defense Analyses in Washington, D.C., a nonprofit organization which advised the U.S. government and was operated by eleven universities. 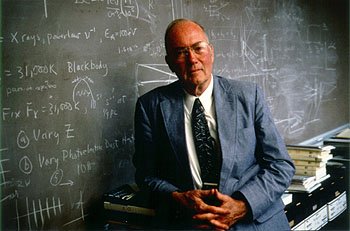 In 1961, Dr. Townes was appointed Provost and Professor of Physics at the Massachusetts Institute of Technology. As Provost he shared with the President responsibility for general supervision of the educational and research programs of the Institute. In 1966, he became Institute Professor at M.I.T., and later in the same year resigned from the position of Provost in order to return to more intensive research, particularly in the fields of quantum electronics and astronomy. He was appointed University Professor at the University of California in 1967. In this position Dr. Townes is participating in teaching, research, and other activities on several campuses of the University, although he is located at the Berkeley campus. 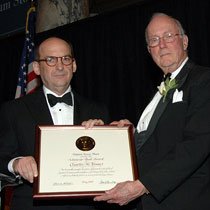 In addition to the Nobel Prize, Townes has received the Templeton Prize, for contributions to the understanding of religion, and a number of other prizes as well as 27 honorary degrees from various universities. 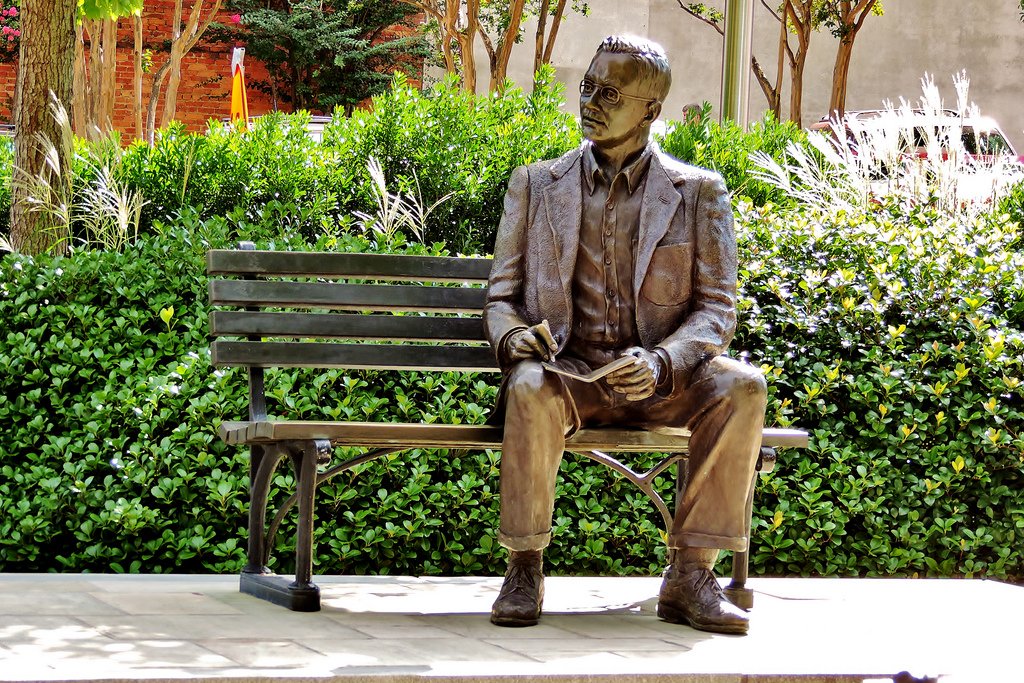