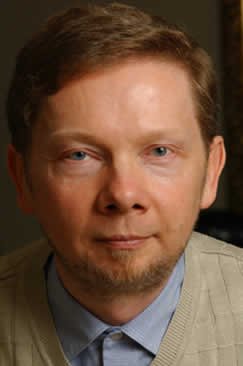 Eckhart Tolle, born Ulrich Leonard Tolle on February 16, 1948 is a German-born Canadian resident. Tolle describes his childhood as unhappy, particularly his early childhood in Germany. There, his parents fought and eventually separated, and he felt alienated from a hostile school environment. He was also affected by the aftermath of the war -  buildings destroyed by Allied bombs and the  "pain in the energy field of the country".

At the age of 13, he moved to Spain to live with his father. Tolle's father did not insist that his son attend  school, and so Tolle elected to study literature, astronomy and language at home.

At the age of fifteen Tolle read several books written by the German mystic Joseph Anton Schneiderfranken, also known as Bo Yin Ra and was affected "very deeply" by them.

At the age of 19, Tolle moved to England and for three years taught German and Spanish at a London school for language studies. Troubled by "depression, anxiety and fear", he began "searching for answers" in his life. He decided to pursue this search by studying philosophy, psychology, and literature, and enrolled in the University of London. After graduating he was offered a scholarship to do research at Cambridge University as a postgraduate student and was admitted there in 1977. 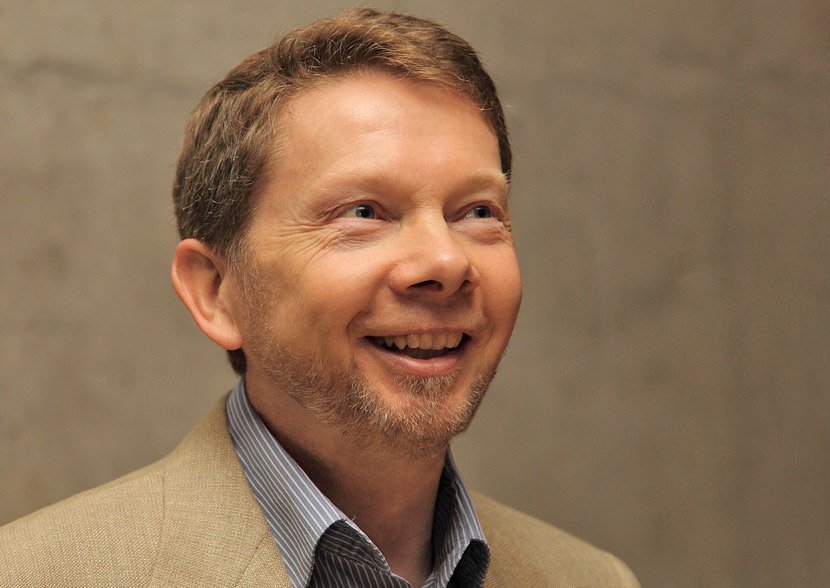 And then one night in 1977, aged 29, he had a rebirth experience.  Tolle calls the experience an "inner transformation." but it was a rebirth, in which  “the  mind-made self, with its heaviness, its problems, that lives between the unsatisfying past and the fearful future, collapsed. It dissolved”

As rebirth experiences go, he got off fairly lightly and was unconscious for most of the process.

The next morning he woke up feeling utterly at peace.  “The peace was there because there was no self. Just a sense of presence or “beingness,” just observing and watching”. 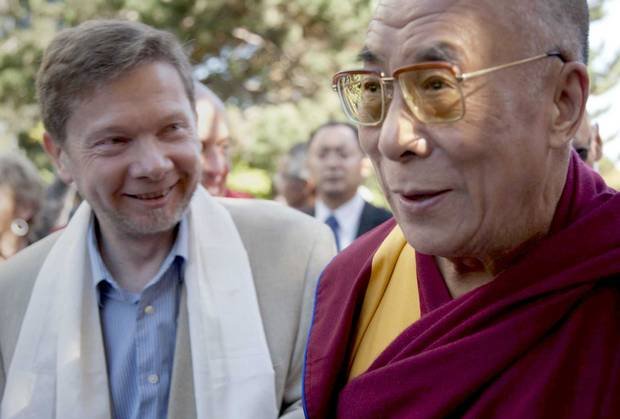 Tolle went out for a walk in London the next morning, and found that “everything was miraculous, deeply peaceful. Even the traffic." The feeling continued, and he began to feel a strong underlying sense of peace in any situation. Tolle stopped studying for his doctorate, and for a period of about two years after this he spent much of his time sitting, “in a state of deep bliss," on park benches in Russell Square, Central London, "watching the world go by.” He stayed with friends, in a Buddhist monastery, or otherwise slept rough on Hampstead Heath. His family thought him “irresponsible, even insane."  Tolle changed his first name from Ulrich to Eckhart. 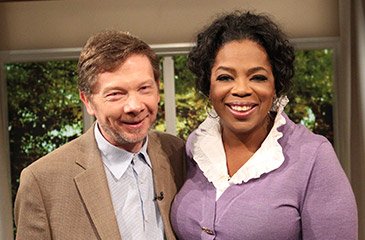 Eckhart is one of the few living and genuine mystics we have.  He was probably genetically predisposed to go this route and like many people who end up becoming spiritual teachers had a very hard time of it before he was 'helped' to move on, because he was 'different'.

Everything about him attests to his credentials as a 'modern mystic'.

Firstly he is little interested in the politics of religion.  He says that “religions have become so overlaid with extraneous matter that their spiritual substance has become almost completely obscured", that they have become "to a large extent ... divisive rather than unifying forces" and become "themselves part of the insanity".

Instead he quotes and uses and pulls together the words of just about every other mystic there has been, trying to show that at this level of the spiritual world there is no difference in the teachings. 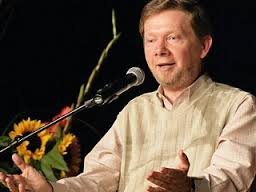 He quotes Descartes, Sartre, Nietzsche, Shakespeare, Albert Einstein, Krishnamurti, Zoroaster, Lao Tzu, Mahavira, Buddha, Heraclitus, Parmenides, Jesus, Epictetus, Marcus Aurelius, Rumi, Meister Eckhart, Hafiz, Rinzai Gigen, Ralph Waldo Emerson and Ramana Maharshi; he uses the works of Mozart, Eric Satie, Claude Debussy and The Beatles; he uses teachings from  the Tao Te Ching, the Bhagavad Gita, the Old Testament, and the New Testament; and he borrows from the mystical schools within religions such as Gnosticism in Christianity, Sufism in Islam, Hasidism and Kabbala in Judaism, Advaita Vedanta in Hinduism, and Zen and Dzogchen in Buddhism.

He is not doing this to try to create a universal religion, a sort of hotch potch of beliefs from worldwide sources, but to show when you get to a true understanding of the spiritual world, the teachings are all the same and always have been.  He is trying to show that there has always been only one spiritual world with one set of common concepts, but religion has been the divisive force seeking always to gain power by inventing difference and faction. 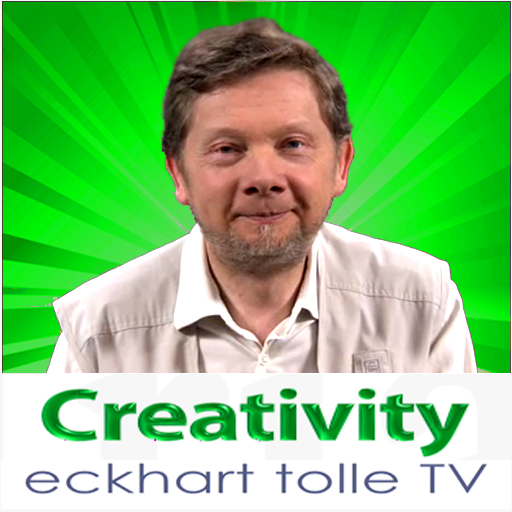 Secondly he abhors the very idea that he is the head of some new religion, movement or cult

A true spiritual teacher does not have anything to teach in the conventional sense of the word, does not have anything to give or add to you, such as new information, beliefs, or rules of conduct. The only function of such a teacher is to help you remove that which separates you from the truth ... The words are no more than signposts....... The Power of Now, is a restatement for our time of that one timeless spiritual teaching, the essence of all religions.

Thirdly, Tolle has a driving need to communicate and help, to explain and bring people to a better understanding of the spiritual world.  His motives are neither money nor power.

In a 2003 interview with the Telegraph Magazine, he did not want to create "a heavy commercial structure", and recognises the danger of institutionalisation  "one needs to be careful that the organization doesn’t become self-serving".

What are his motives?  A wish to communicate what is needed in the progress of mankind.  According to Tolle's official website,

at the core of Tolle's teachings lies the transformation of consciousness, a spiritual awakening that he sees as the next step in human evolution. An essential aspect of this awakening consists in transcending our ego-based state of consciousness. This is a prerequisite not only for personal happiness but also for the ending of violent conflict endemic on our planet. 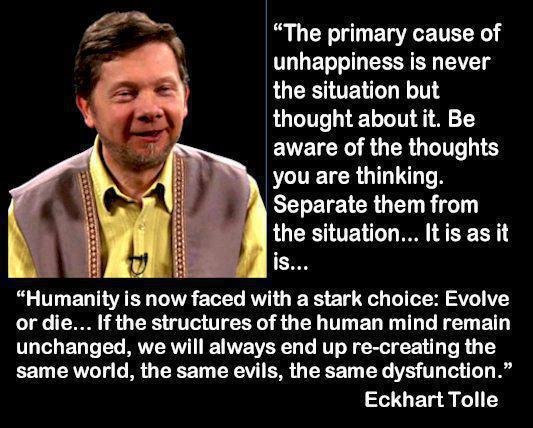 What does he teach?  In his book A New Earth, Tolle describes a major aspect of the human dysfunction as "ego" or an "illusory sense of self" based on unconscious identification with one's memories and thoughts, and another major aspect he calls "pain-body" or "an accumulation of old emotional pain".

Tolle is a very interesting modern mystic, using the media and communications methods of today to help him help others.  He uses TV and the Internet and has his own TV channel.  He runs seminars on the web often with known 'personalities' such as Oprah Winfrey, Jim Carrey and Susan Sarandon.  His wife Kim Eng often helps him with the teaching.  He has formed a company to sell products related to his teachings called Eckhart Teachings. He gives speeches and workshops in English and occasionally in German or Spanish.

He has written only a small number of books but all of them have become best sellers.   The Power of Now  his first book had sold an estimated three million in North America by 2009 and has been  translated from English into 33 languages. Stillness speaks came next.   A New Earth was published in 2005,  it has sold over 5 million copies. Oneness with all life was released in 2008.  Guardians of Being, released in 2009, is a picture book illustrated by Patrick McDonnell, the creator of the comic strip Mutts.

In 2008, an article in the New York Times referred to Tolle as "the most popular spiritual author in the [United States]". In 2011, he was listed by the Watkins Review as the most spiritually influential person in the world.  He remains “humble, good-humoured and unaffected by his popular success".