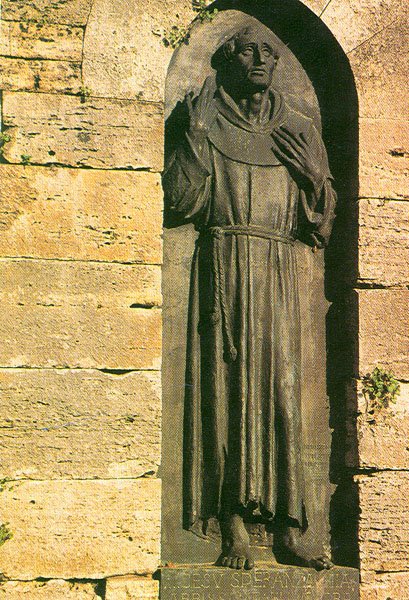 He studied law in Bologna and became a successful lawyer, but at the age of 40 his wife was killed when part of the floor of his house gave way during a dance.  The official version then proceeds:

"He discovered she had been wearing a haircloth to mortify her flesh - indicating great religious devotion and penance."

Shocked, he gave up his legal practice, gave away all his possessions, and from 1268 lived as a wandering ascetic.

In my mind a great question mark hangs over this official version.  How can one be married to someone for the length of time he was - given that he was also Italian - not a nation known for their lack of passion - and not know his wife wore a hair shirt?   I have in my mind an image of his beloved wife, dancing around the floor of their house - and then suddenly the whole floor collapses and she plunges to her death.  One moment loved, alive and dancing; the next gone, killed before his very eyes.   In my assessment, the poor man was grief stricken - truly grief stricken - in a state of shock at his wife's death.  This alone is enough to propel any man into the sort of life he then chose. 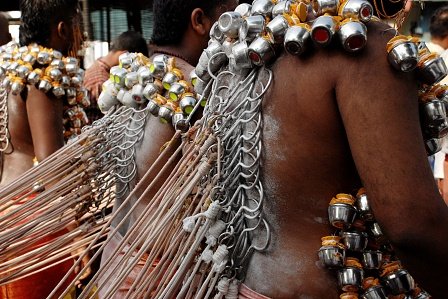 Around 1278 he joined the Friars Minor as a lay brother. By then, two broad factions had arisen in the Franciscan order, the former with a more lenient, less austere attitude, the latter being more severe, preaching absolute poverty and penitence and known as Franciscan Spirituals or Fraticelli.  [Incidentally the name is a complete misnomer as there is nothing spiritual about asceticism].  The Fraticelli separated from the Franciscan Order specifically  to pursue a life of asceticism.  The asceticism took many forms – poverty, ‘chastity’, complete self-denial [denying the self],  flagellation and mortification of the flesh, fasting and humiliation.

I think we now need to remember that the Church of the day preached that any form of terrible event in your life - illness and tragedy included - were punishments from God for your 'sins'.  This was not the most helpful way of dealing with trauma and there is every indication that Jacopone was traumatised by his wife's death.  He appears to have suffered the entire gamut of psychological trauma.  Presumably the clerics persuaded him that to have suffered a tragedy of the magnitude he had experienced, his sins must have been enormous.  As such he had a lot of 'atoning' to do to bring  himself back on track. 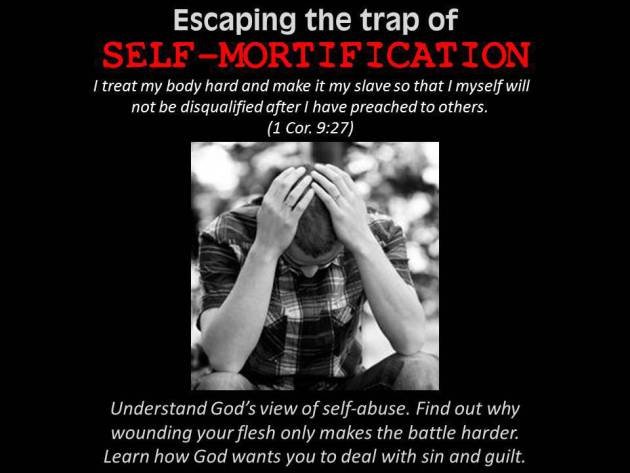 The churches are still doing it - preaching 'sin' and atonement for sin as if it existed
There is no such thing as sin and  vice, it is a man-made concept - the 'God' of
religions does not exist, wielding punishment and terror

And thus he embarked upon a process of deliberate self-harm, not quite as extreme as Henri Suso, but in the same league.

Self-harm (SH) or deliberate self-harm (DSH) includes self-injury (SI)  is defined as the intentional, direct injuring of body tissue most often done without suicidal intentions. These terms are used in the more recent literature in an attempt to reach a more neutral terminology.

The older literature, especially that which predates the Diagnostic and Statistical Manual of Mental Disorders (DSM-IV-TR), almost exclusively refers to self-mutilation. 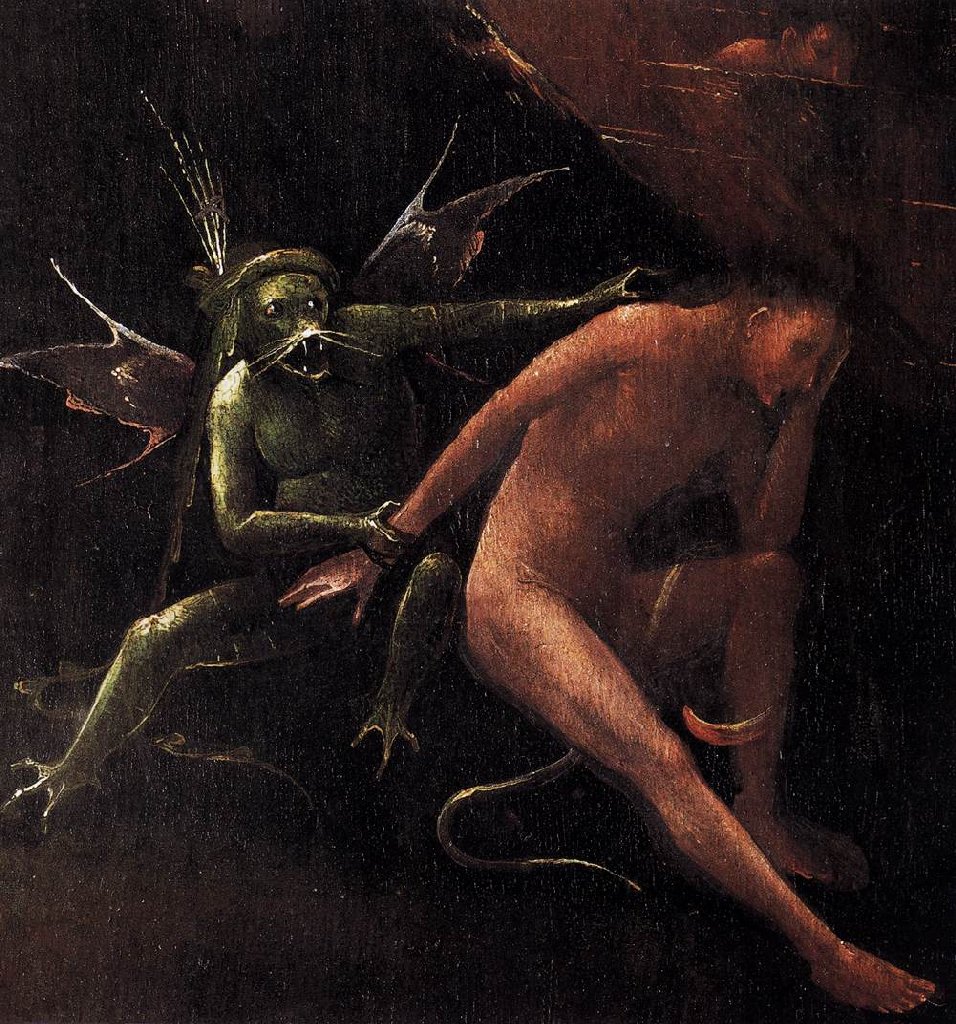 The motivations for self-harm vary and it may be used to fulfill a number of different functions.

These functions include self-harm being used as a coping mechanism which provides temporary relief of intense feelings such as anxiety, depression, stress, emotional numbness or a sense of failure or self-loathing and other mental traits including low self-esteem.

Self-harm is often associated with a history of trauma

Then, as now, the extreme pain and emotion which accompanies self-harm of this level results in hallucinations and visions of quite a dramatic nature.  Our composers seem to alternate between carrot and stick in the attempt to help us to get better.

Filled with all this negative indoctrination, tormented by grief, Jacopone joined  the Fratecelli and in 1294 they sent a deputation to Celestine V to ask permission to live separately from the other friars and observe the Franciscan Rule in its entirety -- a request which was granted.

On Celestine's death in 1297 the position of the Vatican reversed: Boniface VIII favoured the Franciscans who opposed The Fratecelli.  Jacopone, in response, signed a covenant with the powerful Colonnas, one of the most influential families in Rome,  calling for Boniface's deposition. The Pope excommunicated them. A battle between the two rival parties ensued, ending with the siege of Palestrina and the imprisonment and excommunication of Jacopone in 1298. He was freed in 1303 on the death of Boniface. He retired to Collazzone, a small town situated on a hill between Perugia and Todi, and died in 1306.

Jacopone never changed his position on the requirement of asceticism.

He believed, possibly correctly, that the mainstream church had become corrupt and spiritually remote.  Jacopone, like many, believed the clergy to have become a political force too interested in their personal political wars.

But that is what the Catholic Church always was - a political organisation. It could never have become as influential, powerful and rich as it was without being political.  Jacopone was, in some ways, being naive to expect anything else.

State persecution of Christianity ceased in the Roman Empire in the 4th century, when Constantine I issued an edict of toleration in 313. On 27 February 380, Emperor Theodosius I enacted a law establishing Nicene Christianity as the state church of the Roman Empire. In a sense, the Roman Empire became the Catholic Church, and the motives even then were political - a new religion served to unite a disparate set of nations each with their own religions.  From at least the 4th century, Christianity has played a prominent role in the shaping of Western civilization - political and artistic.  It has little to do with Jesus.

As such Jacopone, in his traumatised state was unlikely to ever find sympathy for his views and his asceticism gave him no sense of peace or acceptance or contentment.  He died as traumatised as he lived.