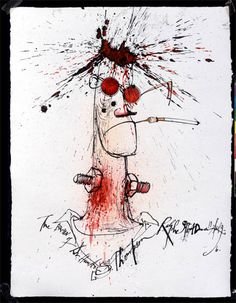 Hunter Stockton Thompson (July 18, 1937 – February 20, 2005) was an American journalist and author. Thompson became known for a style of journalism he termed "Gonzo", where reporters involve themselves in the action to such a degree that they become central figures of their stories.
“The manic first-person subjectivity of his early stories was reportedly the result of sheer desperation; he was facing a looming deadline and started sending the magazine pages ripped out of his notebook”.
The work he remains best known for, Fear and Loathing in Las Vegas: A Savage Journey to the Heart of the American Dream (1971), is possibly his best known example of this style.

He was also known for his lifelong use of alcohol and illegal drugs, his love of firearms, and his contempt for authoritarianism. He remarked:
"I hate to advocate drugs, alcohol, violence, or insanity to anyone, but they've always worked for me."
Thompson was a firearms and explosives enthusiast and owned a vast collection of handguns, rifles, shotguns, and various automatic and semi-automatic weapons, along with numerous forms of gaseous crowd control and many homemade devices. 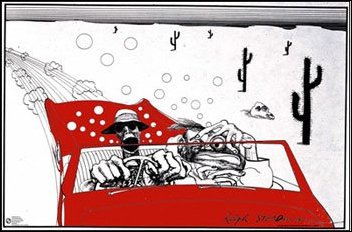 Thompson often used the pen-name Raoul Duke in his work whom he generally described as:
“a callous, erratic, self-destructive journalist who constantly drank alcohol and took hallucinogenic drugs. Fantasizing about causing bodily harm to others was also a characteristic in his work”.

Thompson committed suicide at the age of 67.

Born in Louisville, Kentucky, to a middle-class family, Thompson had a turbulent youth after the death of his father left the family in poverty. His mother worked as a librarian to support her children, but is described as having become a "heavy drinker" following her husband's death. 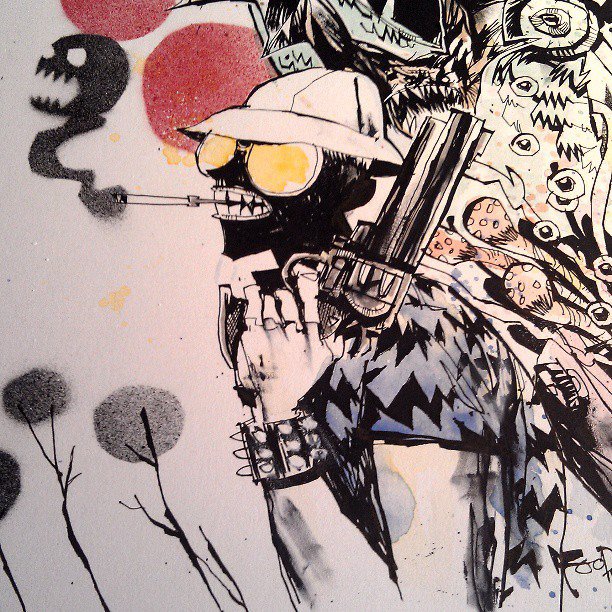 Thompson did not graduate from school.  Charged as an accessory to robbery after being in a car with the robber, Thompson was sentenced to 60 days in Kentucky's Jefferson County Jail. While he was in jail, the school superintendent refused him permission to take his high school final examinations.  He served 31 days and, a week after his release - and one day after sinking nearly every boat in a local harbor by shooting holes beneath their waterlines - enlisted in the United States Air Force.

Thompson was discharged from the Air Force in June 1958, having been recommended for an early ‘honorable discharge’ by his commanding officer. "In summary, this airman, although talented, will not be guided by policy", Col. William S. Evans, chief of information services wrote.  "Sometimes his rebel and superior attitude seems to rub off on other airmen staff members." 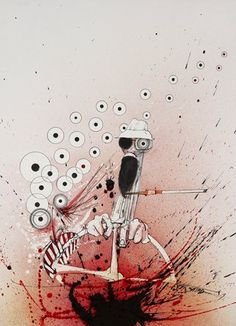 After the Air Force, he relocated to New York City. There he worked briefly for Time.  In 1959, Time fired him for insubordination. Later that year, he worked as a reporter for The Middletown Daily Record in Middletown, New York. He was fired from this job too.

In 1960, Thompson moved to San Juan, Puerto Rico, to take a job with the sporting magazine El Sportivo, which folded soon after his arrival. After returning to the States, Hunter hitchhiked across the United States along U.S. Hwy 40, eventually ending up in Big Sur, California. While there, he published his first magazine feature on the artisan and bohemian culture of Big Sur. Thompson had had a rocky tenure as caretaker of a resort, and the unexpected publicity from the article finally got him fired.

From May 1962 to May 1963, Thompson travelled to South America. In Brazil, he spent several months as a reporter for the Brazil Herald, published in Rio de Janeiro. His longtime girlfriend Sandra Dawn Conklin later joined him in Rio. They were married on May 19, 1963, shortly after returning to the United States. The couple conceived six times, but three pregnancies were miscarried, and two produced infants who died shortly after birth. Hunter and Sandy divorced in 1980. 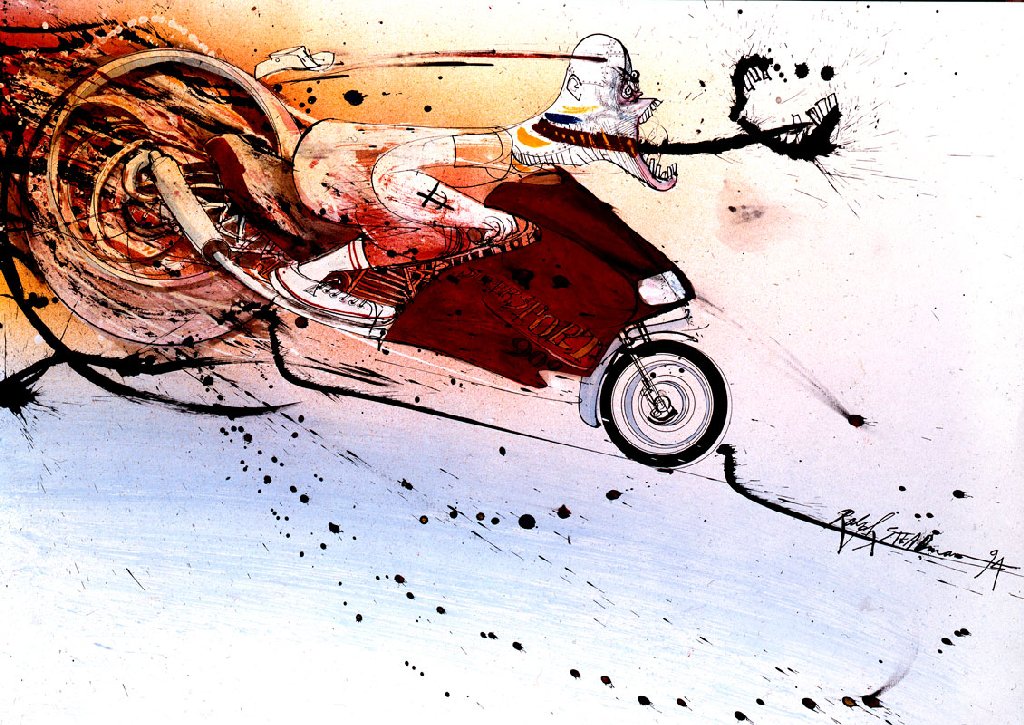 He then moved to San Francisco and immersed himself in the drug and hippie culture that was taking root in the area, writing for the Berkeley underground paper The Spyder.

In 1965, Carey McWilliams, editor of The Nation, hired Thompson to write a story about the California-based Hells Angels motorcycle club. He spent the next year living and riding with the gang. The relationship broke down when the bikers perceived that Thompson was exploiting them for personal gain, and demanded a share of the profits from his writings. An argument at a party resulted in a savage beating for Thompson (or "stomping", as the Angels referred to it). Random House published Hell's Angels: The Strange and Terrible Saga of the Outlaw Motorcycle Gangs in 1966.  A reviewer for The New York Times stated that Thompson had depicted the Hells Angels "not so much as dropouts from society but as total misfits, or unfits — emotionally, intellectually and educationally unfit to achieve the rewards, such as they are, that the contemporary social order offers." 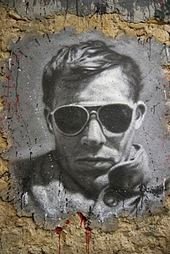 In 1970, Thompson ran for sheriff of Pitkin County, Colorado, as part of a group of citizens running for local offices on the "Freak Power" ticket. The platform included promoting the decriminalization of drugs, tearing up the streets and turning them into grassy pedestrian malls, banning any building so tall as to obscure the view of the mountains, and renaming Aspen "Fat City" to deter investors. Thompson's first article in Rolling Stone was published as The Battle of Aspen.  ‘Despite the publicity, Thompson lost the election’.

The book for which Thompson gained most of his fame had its genesis during the research for an exposé for Rolling Stone on the 1970 killing of the Mexican-American television journalist Rubén Salazar. One of Thompson's sources for the story was Oscar Zeta Acosta. Finding it difficult to talk in the racially tense atmosphere of Los Angeles, Thompson and Acosta decided to travel to Las Vegas.  The result of the trip to Las Vegas became the 1972 book Fear and Loathing in Las Vegas, which first appeared in the November 1971 issues of Rolling Stone as a two-part series. It is written as a first-person account by a journalist named Raoul Duke. 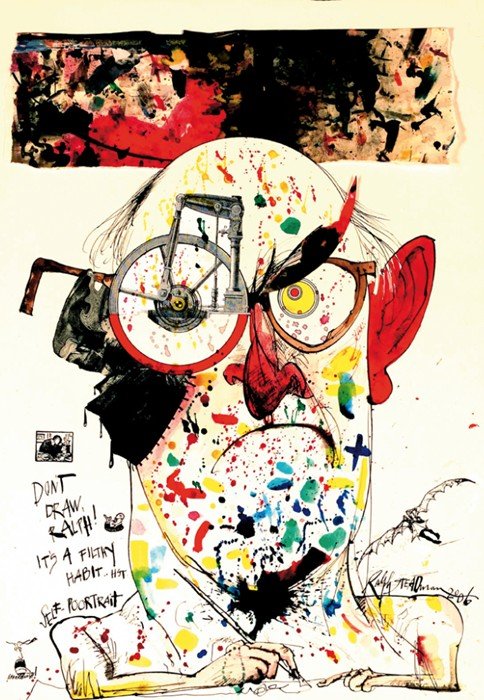 During the trip, Duke and his companion (always referred to as "my attorney") become sidetracked by a search for the American Dream, with
"... two bags of grass, seventy-five pellets of mescaline, five sheets of high-powered blotter acid, a salt shaker half full of cocaine, and a whole galaxy of multi-colored uppers, downers, screamers, laughers ... and also a quart of tequila, a quart of rum, a case of Budweiser, a pint of raw ether, and two dozen amyls."

Thompson continued to take drugs and alcohol until, according to Jann Wenner, co-founder and publisher of Rolling Stone, Thompson's journalistic work began to seriously suffer.  Whilst in Africa to cover "The Rumble in the Jungle" in 1974, he missed the boxing match while intoxicated at his hotel, and did not submit a story to the magazine.

Wenner "After Africa he just couldn't write. He couldn't piece it together".

The year 1980 marked both his divorce from Sandra Conklin.  On July 21, 1981, in Aspen, Colorado, Thompson was pulled over at 2am for running a stop sign, and began to "rave" at a state trooper. Consequently he was arrested, but the drunk-driving charges against him were later dropped. 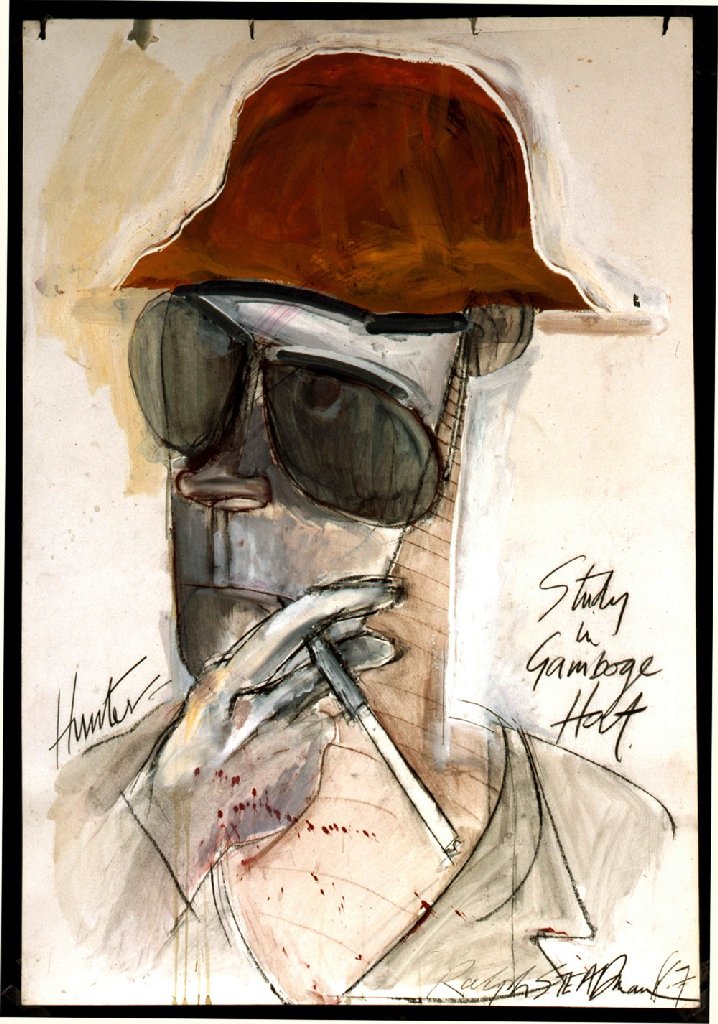 Thompson accepted an advance to write about "couples pornography" for Playboy. As part of his research, in the spring of 1985 he spent evenings at the Mitchell Brothers O'Farrell Theater striptease club in San Francisco and his experience there eventually evolved into a full-length novel tentatively titled The Night Manager. Neither the novel nor the article has been published.  In 1990, former porn director Gail Palmer visited Thompson's home in Woody Creek. She later accused him of sexual assault, claiming that he twisted her breast when she refused to join him in the hot tub. She also described cocaine use to authorities. A six person 11-hour search of Thompson's home turned up ‘various kinds of drugs’ and a few sticks of dynamite.

By the late 1970s, Thompson received complaints from critics, fans and friends that he was regurgitating his past glories without much new on his part.  Perhaps in response to this, as well as the strained relationship with Rolling Stone, and the failure of his marriage, Thompson became more reclusive after 1980. 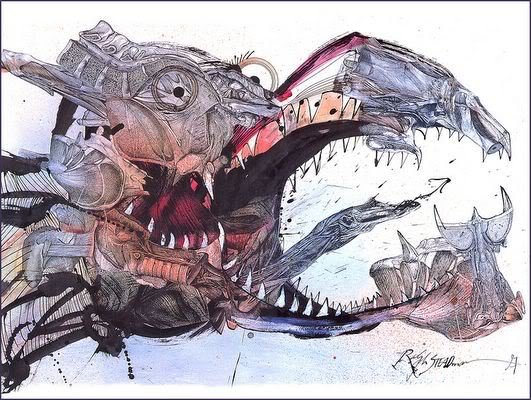 In July 2000, Thompson accidentally shot his assistant, Deborah Fuller, while attempting to scare a bear away. He fired a shotgun at the ground near the bear, and the pellets ricocheted upward, hitting her in in the right arm and leg. She was quoted as saying "I screamed 'You son of a bitch, you shot me.'

Thompson died at Owl Farm, his "fortified compound" in Woody Creek, Colorado, at 5:42 p.m. on February 20, 2005, from a self-inflicted gunshot wound to the head. His son Juan, daughter-in-law Jennifer, and grandson Will were visiting for the weekend. Juan Thompson found his father's body. 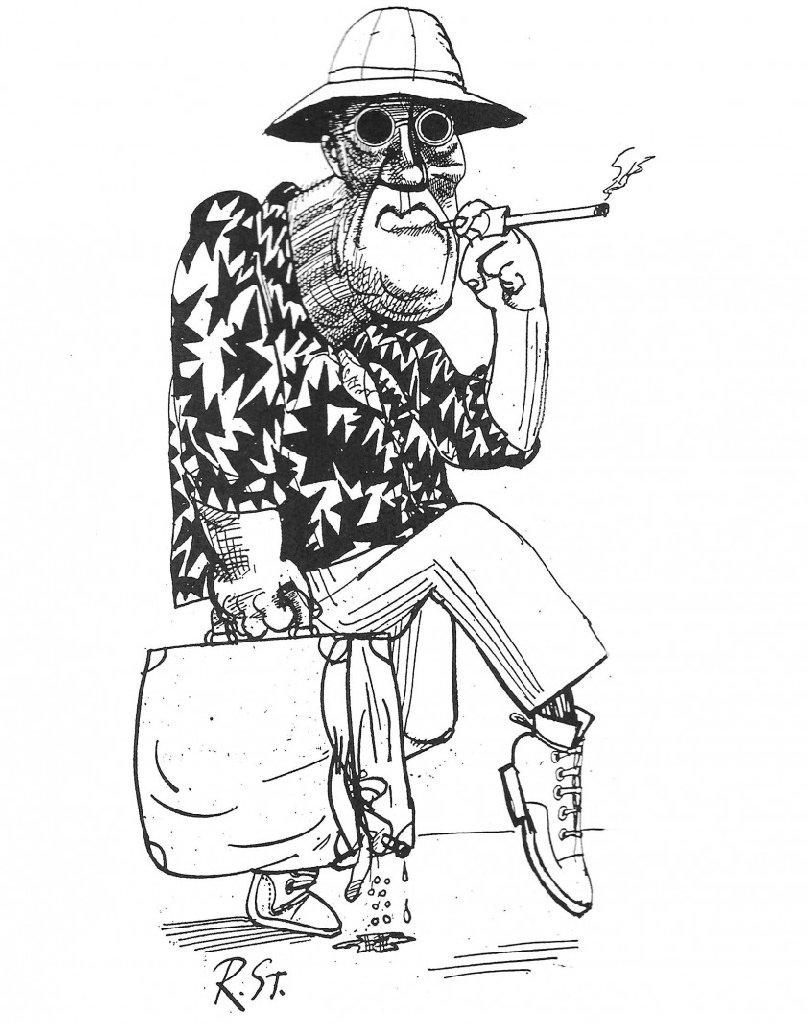 Thompson is often credited as the creator of Gonzo journalism, a style of writing that blurs distinctions between fiction and nonfiction. His work and style are considered to be a major part of the New Journalism literary movement of the 1960s and 1970s, which attempted to break free from the purely objective style of mainstream reportage of the time. Thompson almost always wrote in the first person, while extensively using his own experiences and emotions to color "the story" he was trying to follow. He often exaggerated events to be more entertaining. The term Gonzo has since been applied in kind to numerous other forms of highly subjective artistic expression.

I have two observations for him, but I have no idea, of course, whether they are fact or fiction. 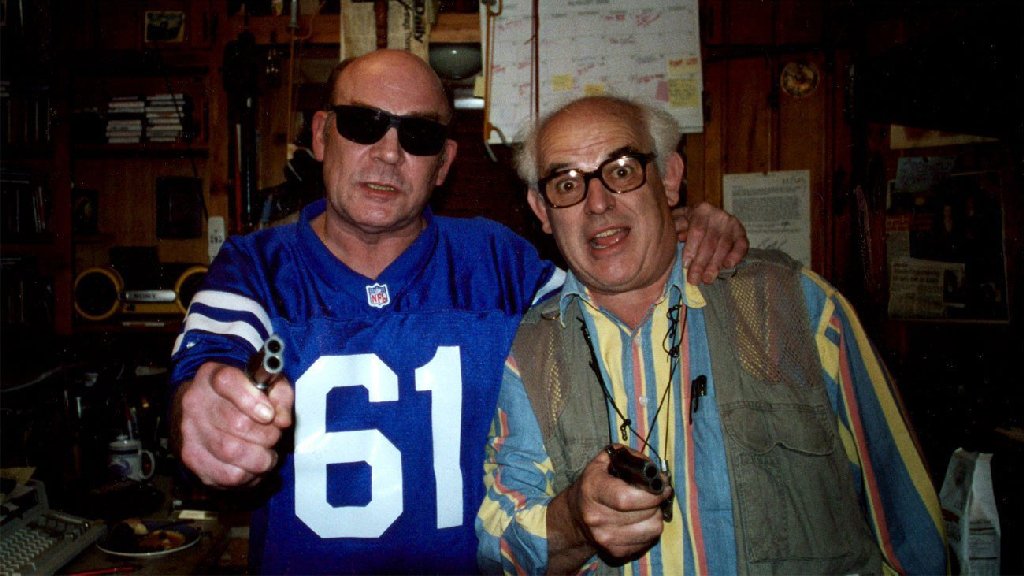 Accompanying many of Thompson’s books were illustrations by British artist Ralph Steadman offering ‘a visual representations of the Gonzo style’. Steadman had a long partnership with Thompson, drawing pictures for several of his articles and books. He accompanied Thompson to the Kentucky Derby for an article for the magazine Scanlan's, to the Honolulu Marathon for the magazine Running, and illustrated both Fear and Loathing in Las Vegas and Fear and Loathing on the Campaign Trail '72. Much of Steadman's artwork revolves around Raoul Duke-style caricatures of Thompson: bucket hats, cigarette holder and aviator sunglasses.