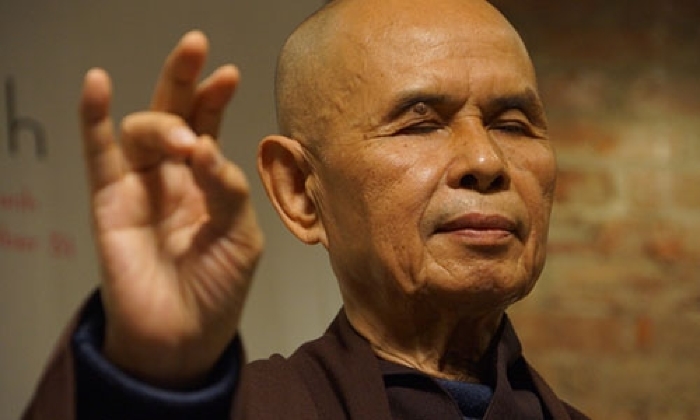 Thích Nhất Hạnh born as Nguyen Xuan Bao  on October 11, 1926 is a Vietnamese Buddhist monk, poet, Zen Master, mystic and peace activist. He is also a vegetarian.  He lives in Plum Village in the Dordogne region in the south of France, there community members tend hundreds of plum trees, and profits from the sales of the fruit are used to assist hungry children.  Plum village is also a retreat open to summer visitors from around the world who wish to spend a month in mindfulness and meditation.

Even in his early eighties, Thích Nhất Hạnh  was still travelling internationally to give retreats and talks.  A long-term exile, he was given permission to make his first return trip to Vietnam in 2005. 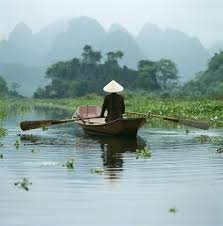 As the co-chairman of the Fellowship of Reconciliation, he played a major role in the creation of "engaged Buddhism"- a profound religious renewal rooted in compassion and service out of which emerged countless projects which combined help to the Vietnam war's victims with nonviolent opposition to the war itself.

His work in Vietnam gave birth to the School of Youth for Social Service, Van Hanh University, a small monastery that was an early base of the nonviolent movement, a pacifist underground press (led by his co-worker Cao Ngoc Phuong), and the La Boi Press, one of the principal vehicles of cultural and religious renewal. 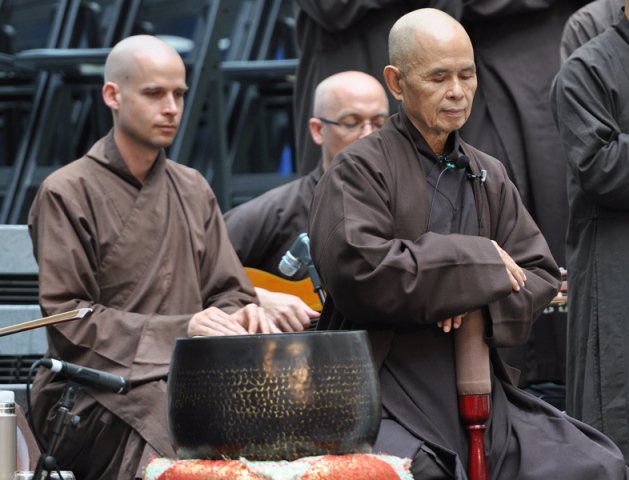 His poetry provides the words of many of the most popular songs in contemporary Vietnam, songs of hope surviving grief. Even in exile, representing overseas the Unified Buddhist Church of Vietnam, he continued to be a force for nonviolence and reconciliation in his homeland and an organizer of supportive responses from other countries.

Like all mystics, he sees only commonality in the world’s mystic movements.  While in the US, for example, Nhất Hạnh stopped at Gethsemani Abbey to speak with Thomas Merton and they remained close associates.

His friendship with Martin Luther King was a factor in Dr. King's decision to ignore the advice of many colleagues and contributors who opposed his "mixing issues" and to join in the opposition to the Vietnam war. Shortly before his assassination, Dr. King nominated Thích Nhất Hạnh for the 1967 Nobel Peace Prize. In his nomination Dr. King said,

I do not personally know of anyone more worthy of [this prize] than this gentle monk from Vietnam. His ideas for peace, if applied, would build a monument to ecumenism, to world brotherhood, to humanity.

Nhất Hạnh has published more than 100 books, including more than 40 in English. They include books in Vietnamese – short stories, novels, essays, historical treatises on Buddhism and poetry.  His books in English include A Guide to Walking Meditation and the Miracle of Mindfulness.

Nhat Hanh was awarded the Courage of Conscience award in 1991. 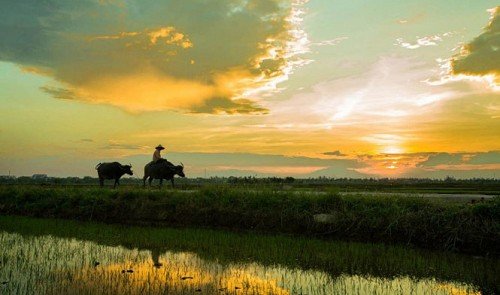 Seeing with the Eyes of Compassion  by James Forest

In 1968, I was traveling with Thich Nhat Hanh on a Fellowship [of Re-conciliation] tour during which there were meetings with church and student groups, senators, journalists, professors, business people, and (blessed relief) a few poets. Almost everywhere he went, this brown-robed Buddhist monk from Vietnam (looking many years younger than the man in his forties he was) quickly disarmed those he met. 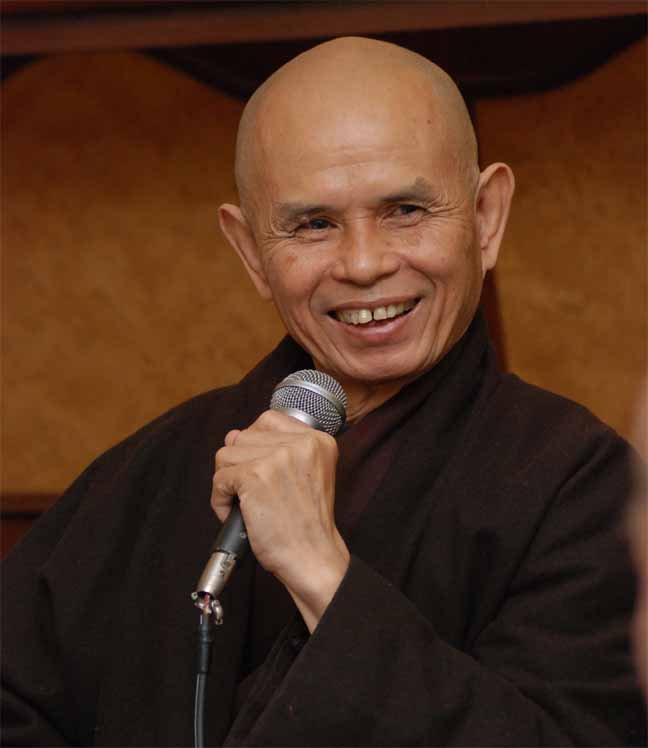 His gentleness, intelligence, and sanity made it impossible for most who encountered him to hang on to their stereotypes of what the Vietnamese were like. The vast treasury of the Vietnamese and Buddhist past spilled over through his stories and explanations. His interest in Christianity, even his enthusiasm for it, often inspired Christians to shed their condescension toward Nhat Hanh's tradition.
He was able to help thousands of Americans glimpse the war through the eyes of peasants laboring in rice paddies and raising their children and grandchildren in villages surrounded by ancient groves of bamboo. He awoke the child within the adult as he described the craft of the village kite-maker and the sound of the wind instruments these fragile vessels would carry toward the clouds.
After an hour with him, one was haunted with the beauties of Vietnam, and filled with anguish at America's military intervention in the political and cultural tribulations of the Vietnamese people. One was stripped of all the ideological loyalties that justified one party or another in their battles, and felt the horror of the skies raked with bombers, houses and humans burned to ash, children left to face life without the presence and love of their parents and grandparents. 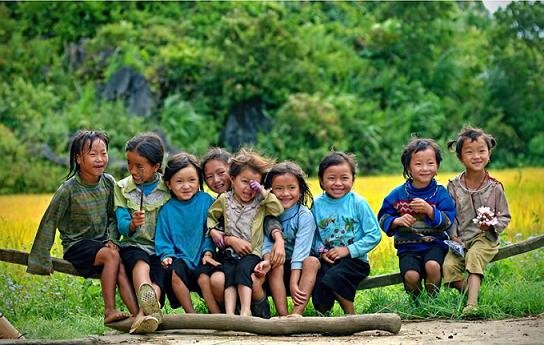 Born as Nguyễn Xuân Bảo, Nhất Hạnh was born in the city of Huế in Central Vietnam in 1926. At the age of 16 he entered the monastery at Từ Hiếu Temple near Huế, Vietnam, where his primary teacher was Zen Master Thanh Quý Chân Thật. 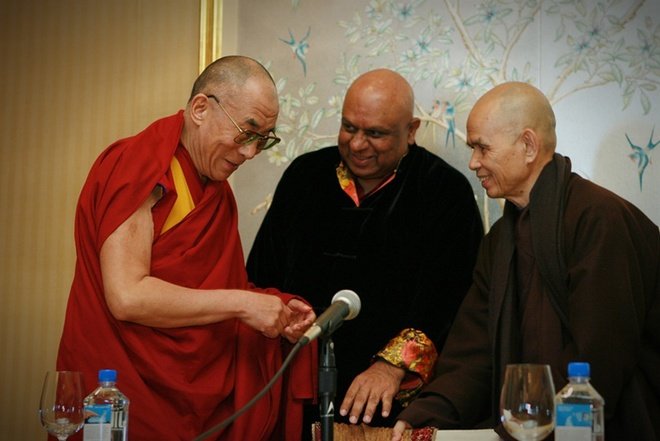 The Vietnamese name Thích (釋) means "of the Shakya clan." All Buddhist monastics in East Asian Buddhism adopt this name as their surname, implying that their first family is the Buddhist community. Nhất means "one" in English; Hạnh (行) means "action", implying "right conduct" or "good nature."

A graduate of Báo Quốc Buddhist Academy in Central Vietnam, Thích Nhất Hạnh received training in Vietnamese traditions of Mahayana Buddhism as well as Vietnamese Thiền and was ordained as a monk in 1949.  Thích Nhất Hạnh's approach has been to combine a variety of traditional Zen teachings with insights from other Mahayana Buddhist traditions, methods from Theravada Buddhism, and ideas from Western psychology to offer a modern light on meditation practice, or at least one that could be applied in a western society.

The little book The Miracle of Mindfulness has been taken up by numerous people from the medical profession, as many studies have shown that mindfulness, when properly taught, can heal a host of ills – depression, anxiety, headaches and migraines as well as help those with chronic pain.

Seeing with the Eyes of Compassion  by James Forest

Until [about 1975], Nhat Hanh had made no attempt to teach Western people any of the skills of meditation-what he often calls mindfulness. Only during the past year [1975/6], first with a few Western friends helping the Vietnamese Buddhist Peace Delegation in Paris, later with a group at that city's Quaker International Center, [did he begin] to teach meditation. The end result was a small book on the subject, The Miracle of Mindfulness, a manual on meditation. 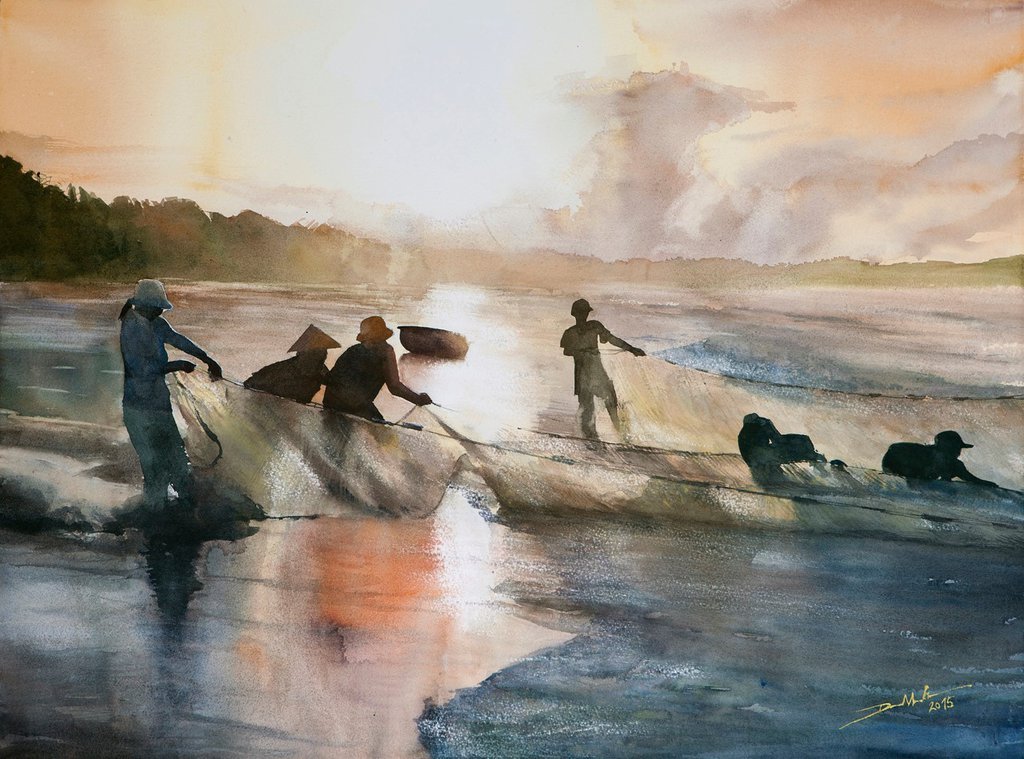 The Miracle of Mindfulness was originally written in Vietnamese as a long letter to Brother Quang, a teacher at the School of Youth, in 1974.  It was intended as both a self-help manual and also as encouragement for the workers and students who continued in a spirit of love and understanding, despite the attacks on the school, kidnappings and even murder.  The idea was to give them the courage to continue.

When it was translated by Mobi Ho, he used mindfulness in order to ensure the final book remained true to its concept, only translating two pages a day.  He said:

It is difficult to describe the actual experience of translating his words, but my awareness of the feel of pen and paper, awareness of the position of my body and of my breath enabled me to see the mindfulness with which Thay had written each word.

Initially only a hundred copies were produced, but ‘like ripples in a pond’, news spread, it was translated into many other languages and is now available world-wide.

Nhất Hạnh is now recognized as a dharmacharya (teacher) and as the spiritual head of the Từ Hiếu Pagoda and associated monasteries. On May 1, 1966 at Từ Hiếu Temple, he received the "lamp transmission", making him a dharmacharya, from Zen Master Chân Thật. 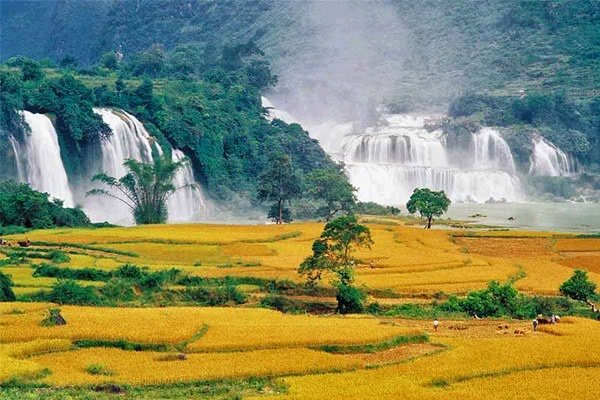 In 1960, Nhất Hạnh went to the U.S. to study comparative religion at Princeton University, and was subsequently appointed lecturer in Buddhism at Columbia University. By then he had gained fluency in French, Chinese, Sanskrit, Pali, Japanese and English, in addition to his native Vietnamese. 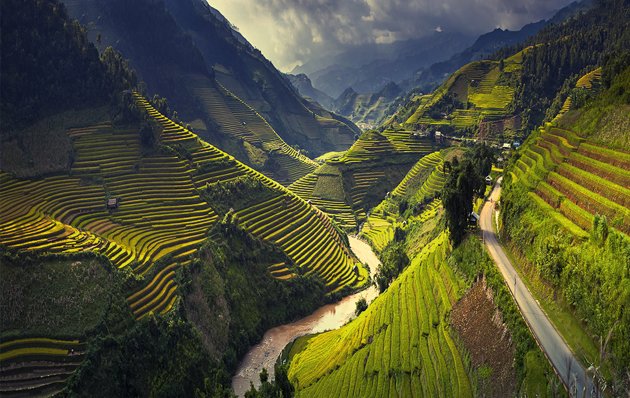 In 1963, he returned to Vietnam to aid his fellow monks and taught Buddhist psychology and prajnaparamita literature at Vạn Hanh Buddhist University, a private institution that focused on Buddhist studies, Vietnamese culture, and languages. At a meeting in April 1965 Vạn Hanh Union students issued a Call for Peace statement. It declared:
"It is time for North and South Vietnam to find a way to stop the war and help all Vietnamese people live peacefully and with mutual respect."
Nhất Hạnh returned to the US in 1966 to lead a symposium in Vietnamese Buddhism at Cornell University and to continue his work for peace. 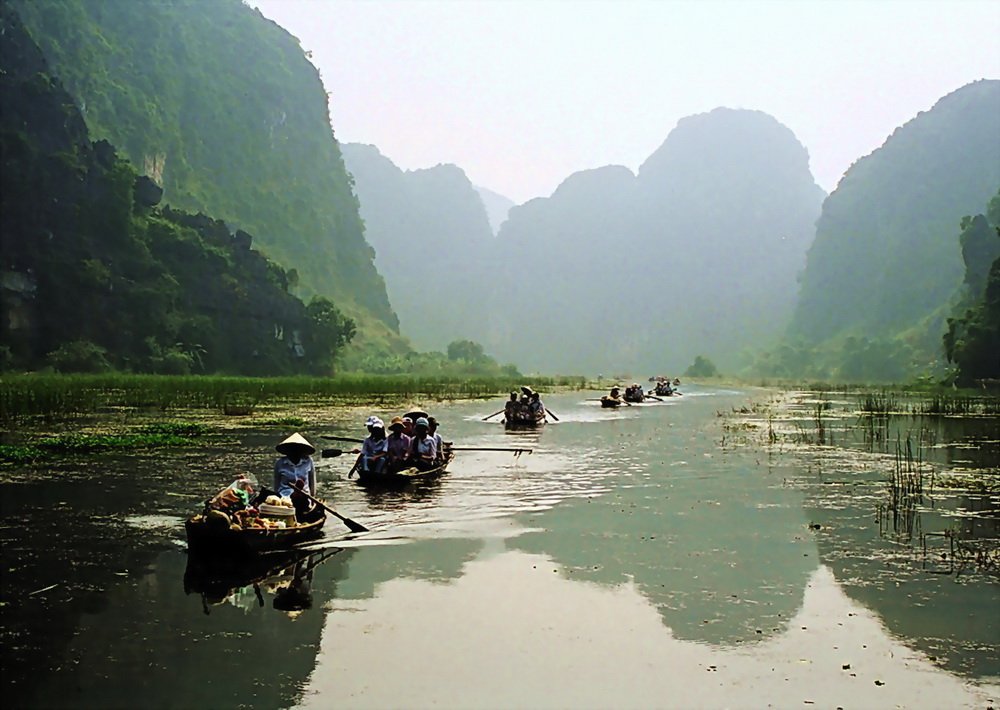 In 1975, Nhất Hạnh founded the Sweet Potatoes Meditation Centre, which grew until, in 1982 he and his colleague Chân Không founded Plum Village, as a vihara and zen center.  The Unified Buddhist Church is now the legally recognized governing body of a large number of retreats, publishing houses, monasteries and other centres -  Plum Village in France; the Blue Cliff Monastery in Pine Bush, New York; the Community of Mindful Living;  Parallax Press;  Deer Park Monastery in California;  Magnolia Village in Batesville, Mississippi; the European Institute of Applied Buddhism in Waldbröl, Germany; and two monasteries in Vietnam, Từ Hiếu Temple near Huế and Prajna Temple in the central highlands;

The monasteries are open to the public during much of the year and provide on-going retreats for laypersons. The Order of Interbeing also holds retreats for specific groups of lay people, such as families, teenagers, veterans, the entertainment industry, members of Congress, and law enforcement officers. 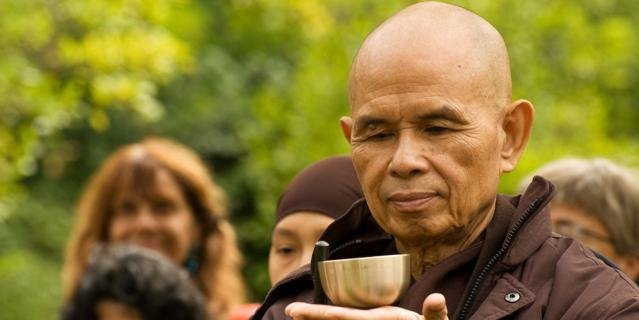 In November 2014, Nhất Hạnh experienced a severe brain haemorrhage and was admitted to hospital. After months of rehabilitation, he was eventually released from the stroke rehabilitation clinic at Bordeaux University Hospital. On July 11, 2015, Nhất Hạnh was flown to San Francisco to speed his recovery with an ‘aggressive’ rehabilitation program through UCSF Medical Center. He returned to France on 8th  January 2016.

A Buddhist Prayer for the End of Suffering 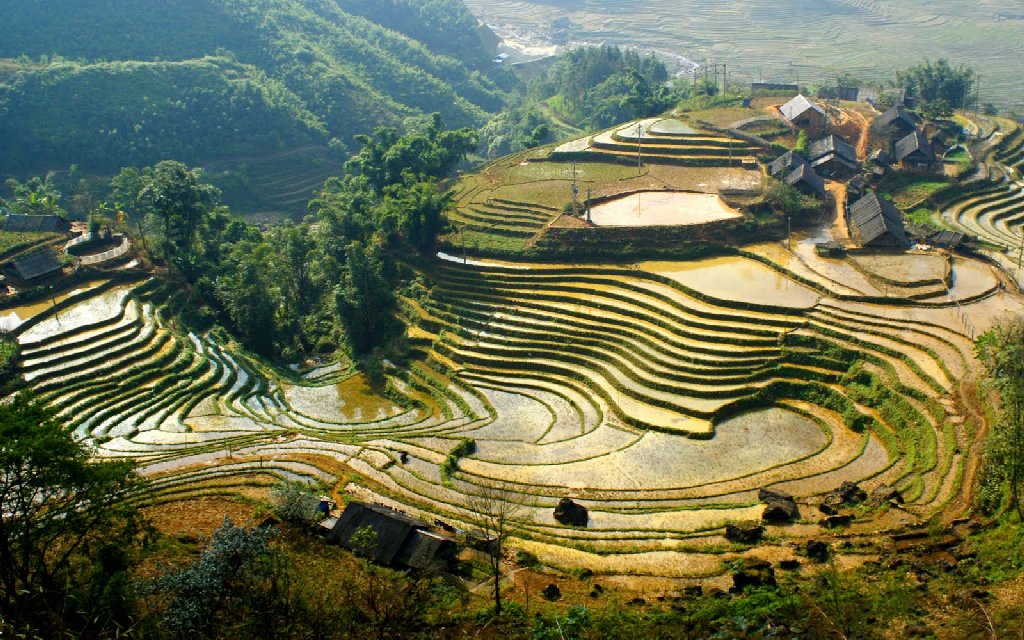