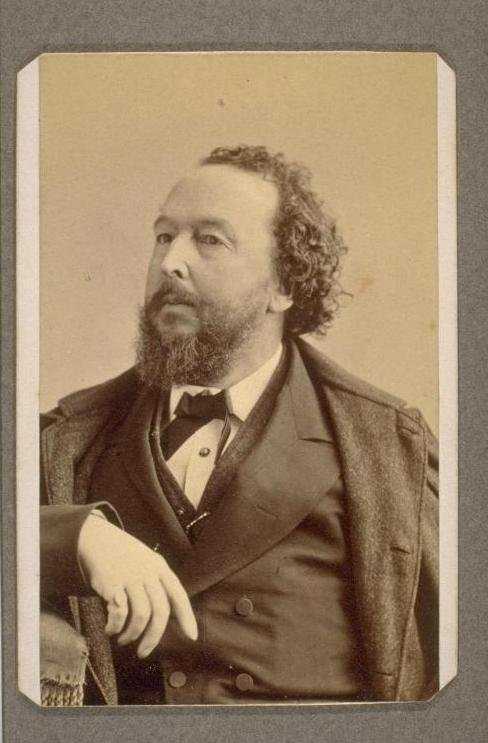 Though he wanted to be most known as a poet, Taylor was largely classified as a travel writer during his lifetime.  His translation of Faust published in 1890, however, was the exception and was greatly admired for its ‘scholarly skill’; it remained in print until 1969.

Bayard’s poetry actually deserves a place on the site, as he was clearly inspired by extreme emotion, of a most fiery kind, often unbridled passion.  Some of this emotion, however, was grief.  In 1849 Taylor married Mary Agnew, who died of tuberculosis the next year.  But he also had a great number of spiritual experiences not determined by grief, and one rather lovely hallucination of celestial music, first documented in W F Prince’s Noted Witnesses for Psychic Occurrences.

Assessments of his Works

1920 edition Encyclopedia Americana:
It is by his translation of Faust, one of the finest attempts of the kind in any literature, that Taylor is generally known; yet as an original poet he stands well up in the second rank of Americans. His Poems of the Orient and his Pennsylvania ballads comprise his best work. His verse is finished and sonorous, but at times over-rhetorical.

According to the 1911 edition of Encyclopædia Britannica:
Taylor's most ambitious productions in poetry—- his Masque of the Gods (Boston, 1872), Prince Deukalion; a lyrical drama (Boston, 1878), The Picture of St John (Boston, 1866), Lars; a Pastoral of Norway (Boston, 1873), and The Prophet; a tragedy (Boston, 1874)—- are marred by a ceaseless effort to overstrain his power. But he will be remembered by his poetic and excellent translation of Goethe's Faust (2 vols, Boston, 1870-71) in the original metres.
Taylor felt, in all truth, the torment and the ecstasy of verse; but, as a critical friend has written of him, his nature was so ardent, so full-blooded, that slight and common sensations intoxicated him, and he estimated their effect, and his power to transmit it to others, beyond the true value. He had, from the earliest period at which he began to compose, a distinct lyrical faculty: so keen indeed was his ear that he became too insistently haunted by the music of others, pre-eminently of Tennyson. But he had often a true and fine note of his own. His best short poems are The Metempsychosis of the Pine and the well-known Bedouin love-song.
In his critical essays Bayard Taylor had himself in no inconsiderable degree what he wrote of as that pure poetic insight which is the vital spirit of criticism. The most valuable of these prose dissertations are the Studies in German Literature (New York, 1879).

And in Appletons' Cyclopædia of American Biography of 1889, Edmund Clarence Stedman gives the following critique:

His poetry is striking for qualities that appeal to the ear and eye, finished, sonorous in diction and rhythm, at times too rhetorical, but rich in sound, color, and metrical effects. His early models were Byron and Shelley, and his more ambitious lyrics and dramas exhibit the latter's peculiar, often vague, spirituality. Lars, somewhat after the manner of Tennyson, is his longest and most attractive narrative poem. Prince Deukalion was designed for a masterpiece; its blank verse and choric interludes are noble in spirit and mould. Some of Taylor's songs, oriental idyls, and the true and tender Pennsylvanian ballads, have passed into lasting favor, and show the native quality of his poetic gift. His fame rests securely upon his unequalled rendering of Faust in the original metres, of which the first and second parts appeared in 1870 and 1871. His commentary upon Part II for the first time interpreted the motive and allegory of that unique structure. 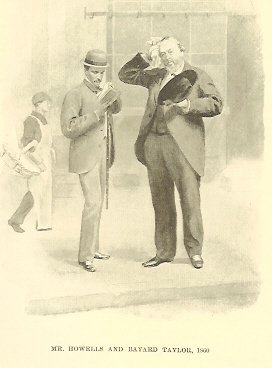 Taylor was born on January 11, 1825, in Kennett Square in Chester County, Pennsylvania. He was the fourth son, the first to survive to maturity, of the Quaker couple, Joseph and Rebecca (née Way) Taylor. His father was a wealthy farmer.

Bayard received his early instruction in an academy at West Chester, Pennsylvania, and later at nearby Unionville. At the age of seventeen, he was apprenticed to a printer in West Chester. The influential critic and editor Rufus Wilmot Griswold encouraged him to write poetry. The volume that resulted, Ximena, or the Battle of the Sierra Morena, and other Poems, was published in 1844 and dedicated to Griswold.

Using the money from his poetry and an advance for travel articles, he visited parts of England, France, Germany and Italy, making largely pedestrian tours for almost two years. He sent accounts of his travels to the Tribune, The Saturday Evening Post, and The United States Gazette. 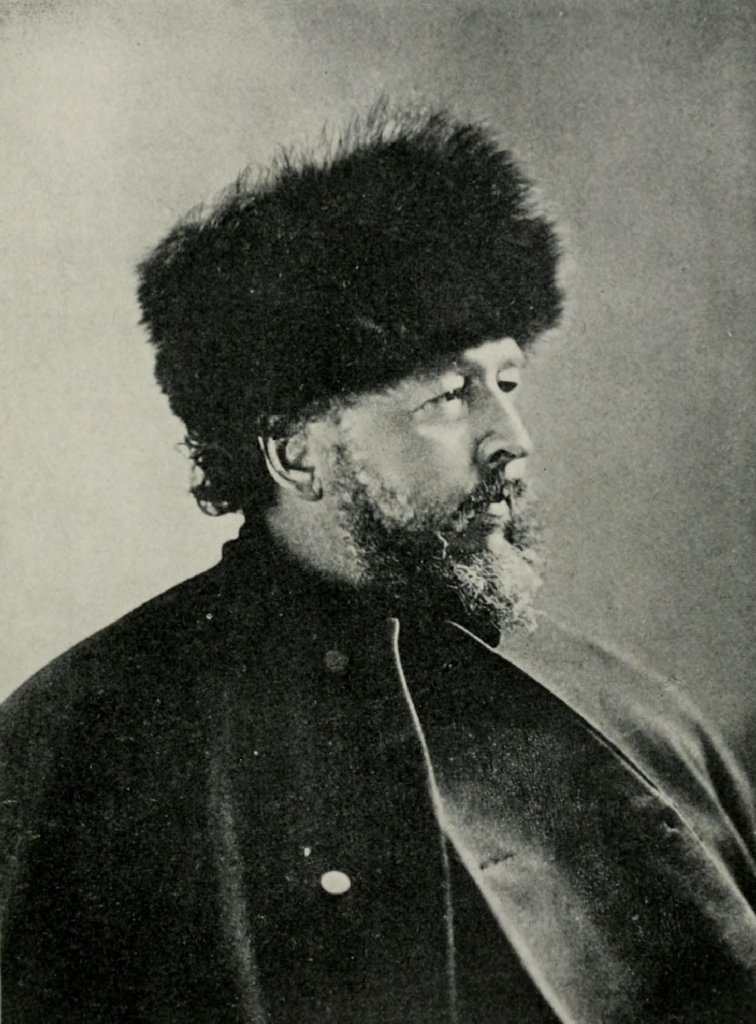 In 1846, he published a collection of those articles in two volumes as Views Afoot, or Europe seen with Knapsack and Staff. In 1848, Horace Greeley, editor of the New York Tribune, hired Taylor and sent him to California to report on the gold rush. He returned by way of Mexico and published another two-volume collection of travel essays, El Dorado; or, Adventures in the Path of Empire (1850). Within two weeks of release, the books sold 10,000 copies in the U.S. and 30,000 in Great Britain.

In 1851 he travelled to Egypt, where he followed the Nile River as far as 12° 30' N. He also travelled in Palestine and Mediterranean countries, writing poetry based on his experiences. Toward the end of 1852, he sailed from England to Calcutta, and then to China, where he joined the expedition of Commodore Matthew Calbraith Perry to Japan. The results of these journeys were published as A Journey to Central Africa; or, Life and Landscapes from Egypt to the Negro Kingdoms of the White Nile (1854); The Lands of the Saracen; or, Pictures of Palestine, Asia Minor, Sicily and Spain (1854); and A Visit to India, China and Japan in the Year 1853 (1855). 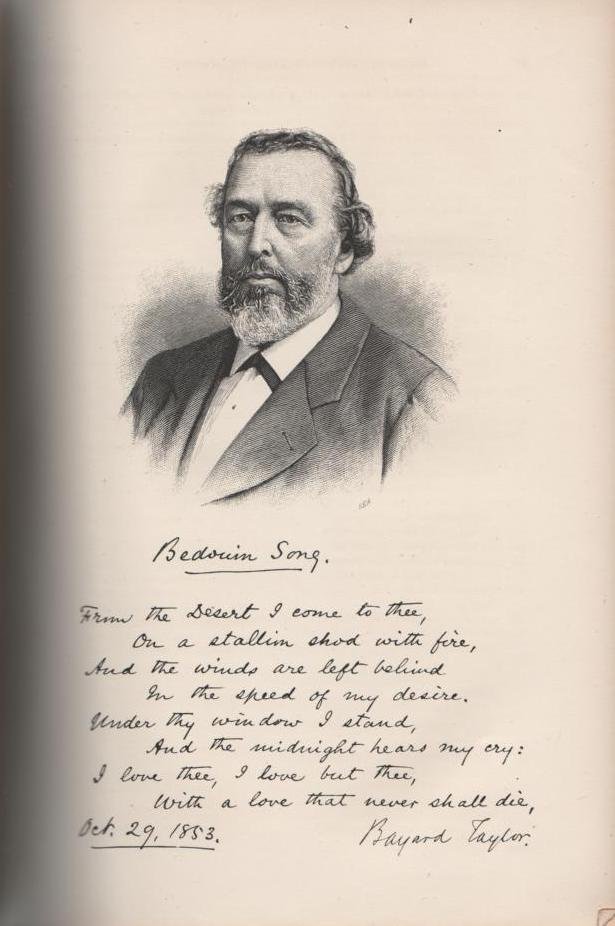 In 1855, he went to northern Europe to study Swedish life, language and literature. The trip inspired his long narrative poem Lars. His series of articles Swedish Letters to the Tribune were republished as Northern Travel: Summer and Winter Pictures (1857).

And thus it continues; even after he remarried, he simply took his wife with him.  He published his first novel Hannah Thurston in 1863, but it was not well received by critics.  So he went back to travelling.  In 1866, Taylor travelled to Colorado and made a large loop through the northern mountains on horseback with a group that included William Byers, editor of the newspaper Rocky Mountain News. His letters describing this adventure were later compiled and published as Colorado: A Summer Trip.

During March 1878, the U.S. Senate confirmed his appointment as United States Minister to Prussia.  A few months after arriving in Berlin, Taylor died there on December 19, 1878. The New York Times published his obituary on its front page, referring to him as "a great traveler, both on land and paper."