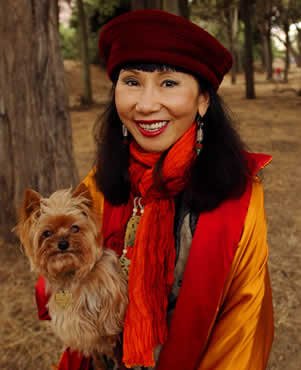 Amy Tan (born February 19, 1952) is an American writer. She lives in Sausalito, California, with her husband, Louis DeMattei, a tax attorney whom she met on a blind date and married in 1974.

Her most well-known work is The Joy Luck Club, which has been translated into 35 languages, but Amy has written several other bestselling novels, including The Kitchen God's Wife, The Hundred Secret Senses, The Bonesetter's Daughter and Saving Fish from Drowning. She also wrote a collection of non-fiction essays entitled The Opposite of Fate: A Book of Musings. Her most recent novel Saving Fish from Drowning explores the tribulations experienced by a group of people who disappear while on an expedition in the jungles of Burma. In addition to these, Tan has written two children's books: The Moon Lady (1992) and Sagwa, the Chinese Siamese Cat (1994), which was turned into an animated series. She has also appeared on television in a short spot encouraging children to write. Tan is also in a band with several other well-known writers, the Rock Bottom Remainders.

Tan was born in Oakland, California and she has epilepsy caused by Lyme's disease. What is interesting is that her family appear to suffer as a whole from various forms of brain disease. She is the second of three children born to Chinese immigrants Daisy and John Tan, an electrical engineer and Baptist minister. When Tan was 15 years old, her older brother Peter and father both died of brain tumours within a year of each other.