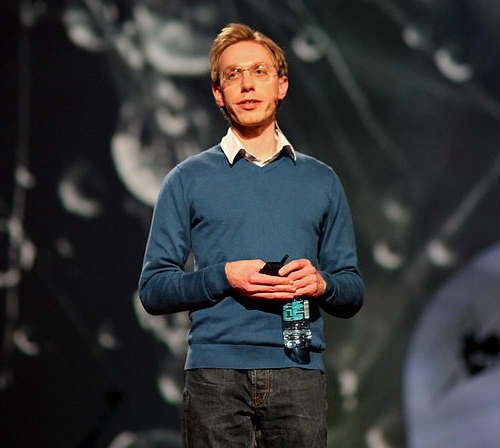 Daniel Tammet FRSA (born 31 January 1979) is an English writer, essayist and autistic savant. His best selling 2006 memoir, Born on a Blue Day, about his life with high-functioning autism and savant syndrome, was named a "Best Book for Young Adults" in 2008 by the American Library Association.

Tammet's second book, Embracing the Wide Sky, was described as one of France's best selling books of 2009 by L'Express magazine in its March 2010 edition.

Thinking in Numbers, Tammet's third book, was published by Hodder in the UK on 16 August 2012.  Tammet's books have been published in 20 languages.

He was elected a Fellow of the Royal Society of Arts in 2012.

Tammet was the eldest of nine children. He suffered epileptic seizures as a young child, which he subsequently outgrew following medical treatment. At age twenty-five, he was diagnosed with Asperger syndrome by Professor Simon Baron-Cohen of the Autism (Spectrum) Research Centre at Cambridge University.

Tammet is one of fewer than a hundred "prodigious savants" according to Dr. Darold Treffert, the world's leading researcher in the study of savant syndrome.

Tammet finished school with nine GCSEs (an 'A*' in History, 'A' grades in English, English Literature, French, and German, two 'B' grades in the Sciences, a 'B' in Maths, and a 'C' in Woodwork) and three A-Levels in History, French and German, all at grade 'B'.
Preferring travel to university, Tammet taught English for a year in Lithuania.

Tammet twice participated in the World Memory Championships in London under his birth name, placing 12th in 1999 and 4th in 2000.