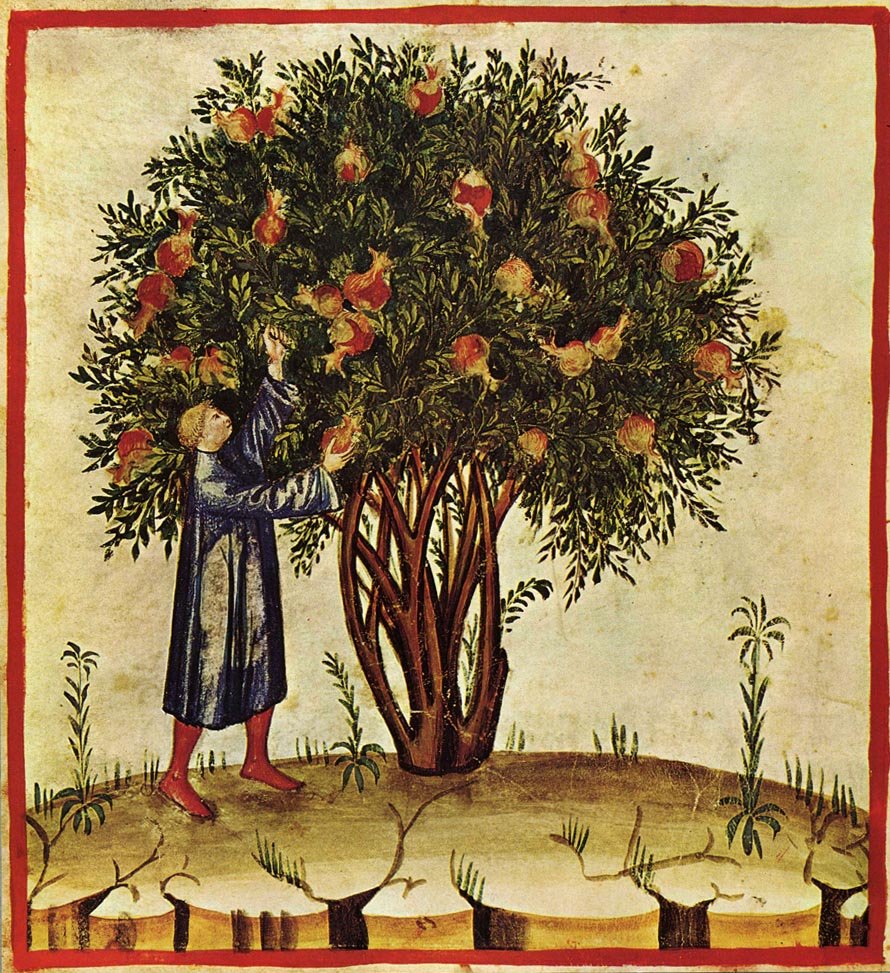 The Tacuinum Sanitatis is a medieval handbook mainly on health, but it is yet another book written by a healer.

The Tacuinum (sometimes Taccuinum) Sanitatis is  based on the Taqwim al‑sihha تقويم الصحة ("Maintenance of Health"), an eleventh-century Arab medical treatise by Ibn Butlan of Baghdad.

Aimed at a cultured lay audience, the text exists in several variant Latin versions, the manuscripts of which are characteristically so profusely illustrated that one student called the Taccuinum "a trecento picture book," only "nominally a medical text".

Which is unfair, because pictures help in identifying plants and in encouraging people to use the book.  The Taccuinum describes the beneficial and harmful properties of foods and plants, in some detail. So in the first place it is a true herbal.

The term 'Herbs', now has a different meaning to that once in use.  A herb of old was a medicine, often one that you could eat.  Thus a herb was a healing plant.  We have narrowed down the definition so much that we have lost sight of what the ancient healers were trying to achieve. 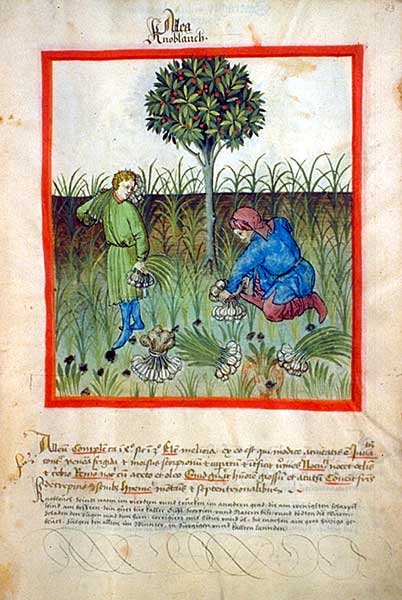 (Bibliothèque nationale, Paris).  Both onions and garlic have remarkable

In effect their objective was to eat for health.  The principal objective was to go for the cause of the illness, but failing that, a plant was used as a palliative, a means of alleviating the symptoms.  It is a sad reflection of medicine today that we have not only abandoned the idea of finding and treating the cause of illness, but have also almost entirely lost the art of eating for health.

As another sad reflection of our 'instant everything' culture, the solution to symptoms is a pill to hide the symptoms.  The pharmaceuticals of today do not heal, they hide.

Famous herbalists of the Western tradition include Avicenna , Galen , Paracelsus  and Culpepper. All these people used the term in its wider sense and also used food to heal, and plants as medicine.  Mrs Grieve's Herbal is still in use as a source of reference using this definition. The Taccuinum attempts to do the same.

The Taccuinum and the mind

Another aspect that sets the book apart, is its recognition of the value of food for the mind as well as the body and a recognition of how much the mind affects our state of health.  Listing its contents organically rather than alphabetically, it sets forth the six essential elements for well-being:

The only way any true healing can take place is if you take responsibility for your own health - healing yourself.   You can ask for help to find the pathogen and seek help with the types of plant that help with that pathogen, but ultimately you must take control. 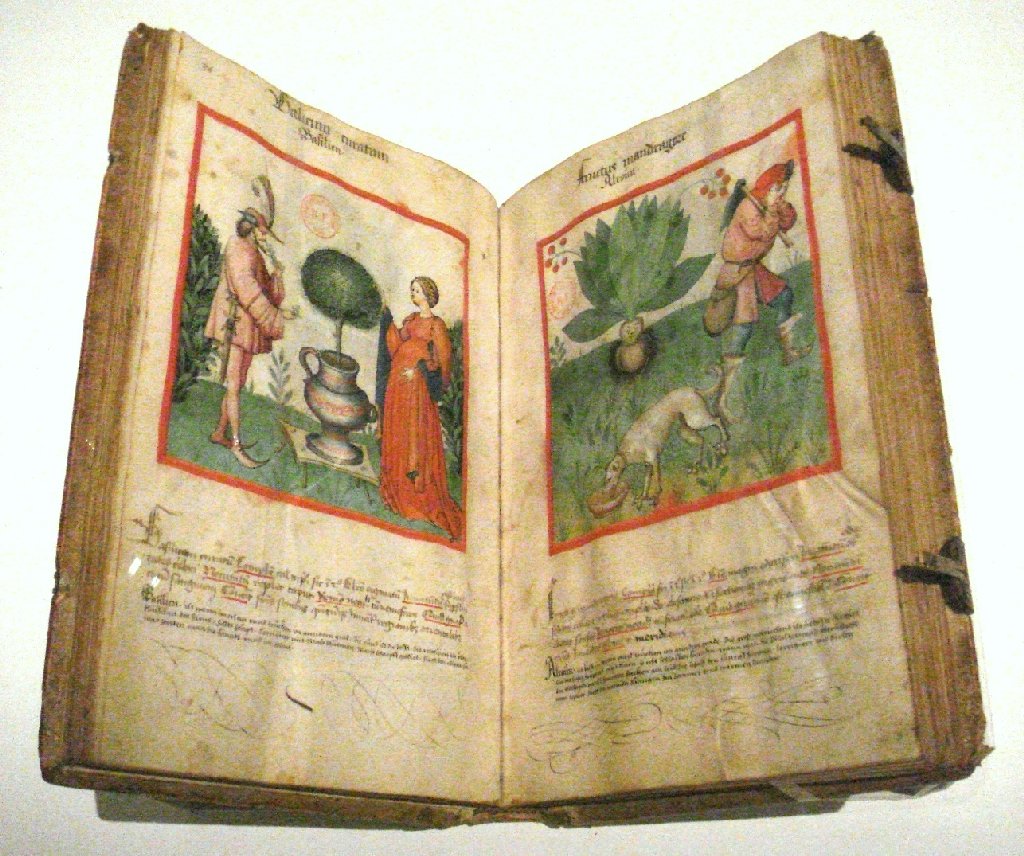 Every illness has a cause, and causes, in the end, always end up being events in the environment.  In effect, your body and mind are perfectly in balance without any environmental impacts, you have a perfectly functioning mind and Immune system, but bombard it with environmental events and it may well struggle to counter the attack.  The types of pathogens are : 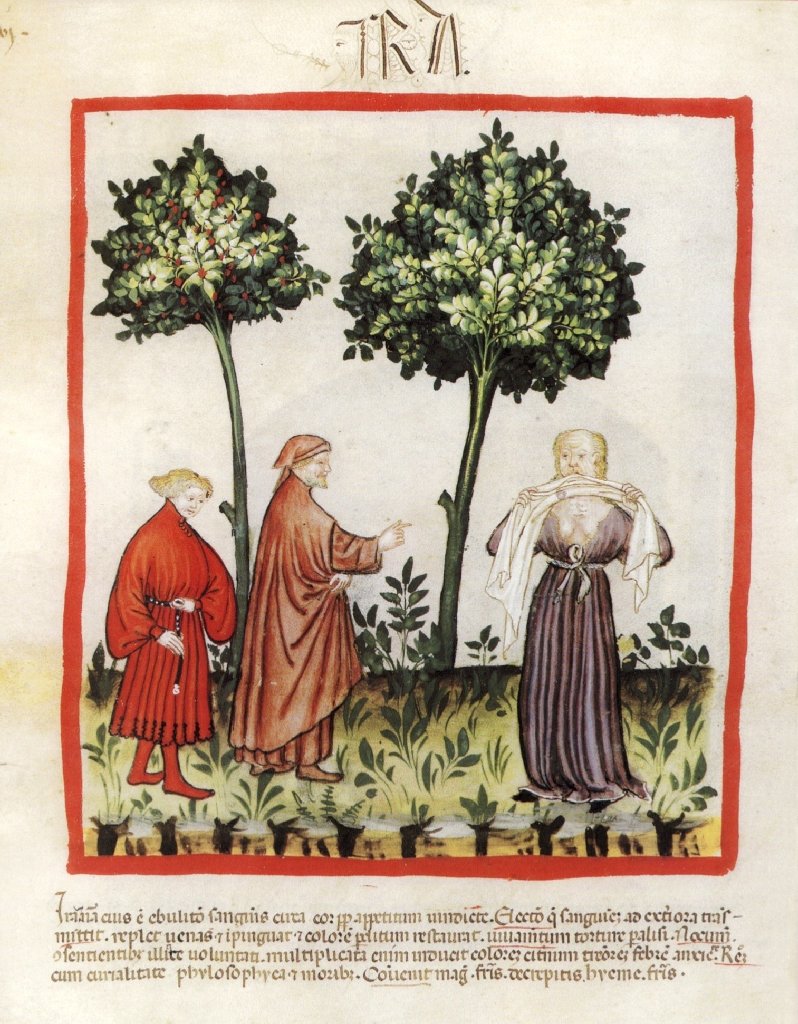 In the days when the Taccuinum was written, the aim was to identify the pathogen, then match the plant to the pathogen.  Our main ally was then the immune system.

Every activity in the Taccuinum described above was geared to helping the immune system.  Hurt, stress, sorrow suppress the immune system and allow the pathogen to get a greater hold.  Only now are we beginning to understand the nature of latent viruses, for example, viruses that can enter the body and lay low waiting for the immune system to be depressed.

The state of mind is key to keeping those viruses at bay and on hold - latent!

This was recognised in 11th century Arabia, but it doesn't seem to be well understood today.  This factor is perhaps more tragic as we now have the technology to identify pathogens - something the ancient healers did not have - but we are not using it! 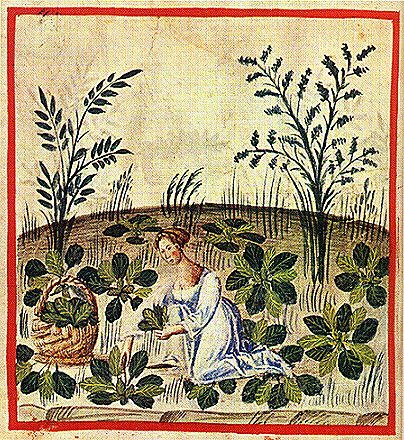 The key to all health is achieving balance.  And the Tacuinum Sanitatis says that illnesses result from imbalance.

If you glance through the illness section, you will see that in many cases the illness is described as an imbalance - either a deficiency or an overload of some chemical needed by the body.

Whilst food maintains the needed balance, - through food we obtain needed vitamins, minerals, and amino acids, for example, - a medicine in its true sense restores balance when it has been lost.  Thus food is eaten every day to maintain a state of equilibrium, whereas medicines properly speaking are given for a very very short time to restore balance when equilibrium has been lost. 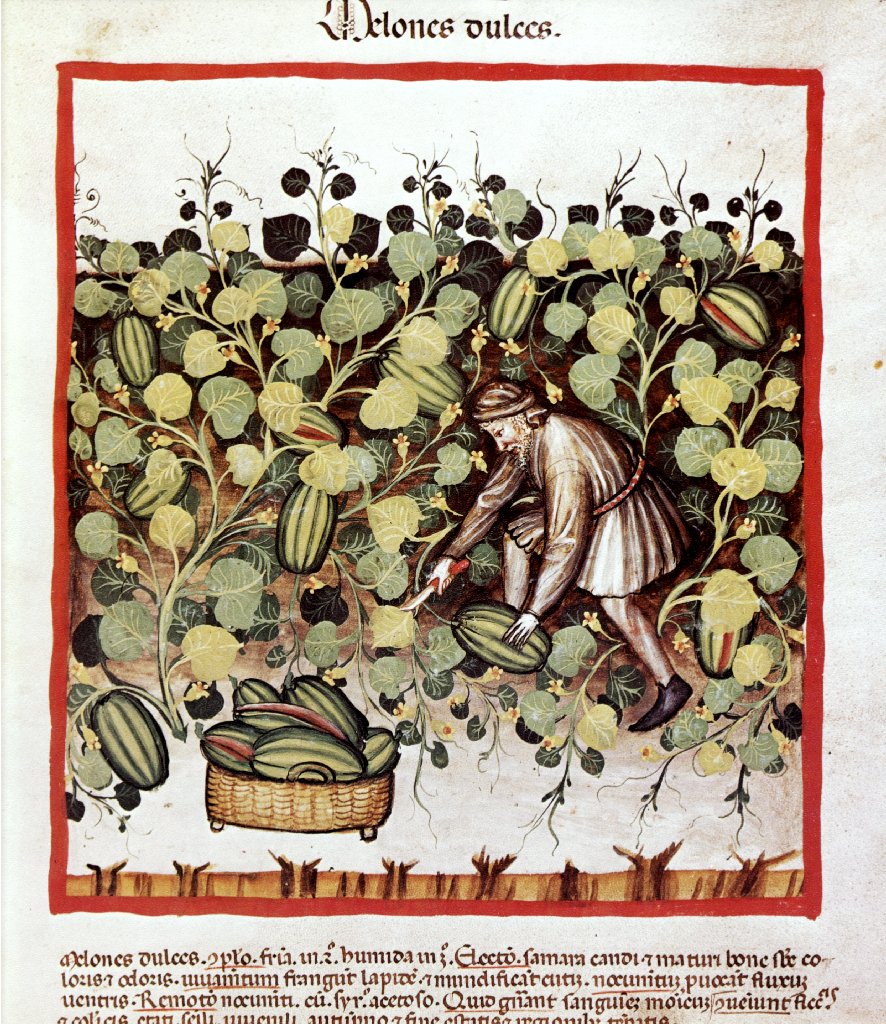 Pathogens are removed by medicines.  But a plant can serve as both food and medicine which is why this area is so interesting.  Many berries have both anti-viral and anti-bacterial properties, for example and the sulphur in leeks and onions can act as a chelator of heavy metals like lead.

The recognition of the importance of a plant in taking multiple roles - maintainer of balance and restorer of balance is there in the Tacuinum.  The book combines medicine, with instructions on cultivation and also cooking hints.  One of the earliest identifiable images of the carrot is found in it, taking multiple roles. Carrots also appear in The Greek Herbal of Dioscorides: Illustrated by a Byzantine in A.D. 512.

This site, incidentally aims to do the same thing, we have a food section with growing instructions and some ideas for cooking, and a medicines section, with activities described.  And we have linked food, medicine and illnesses, so that you can see what illnesses a food or medicine help with and vice versa, what foods or medicines help with an illness.

The versions and editions 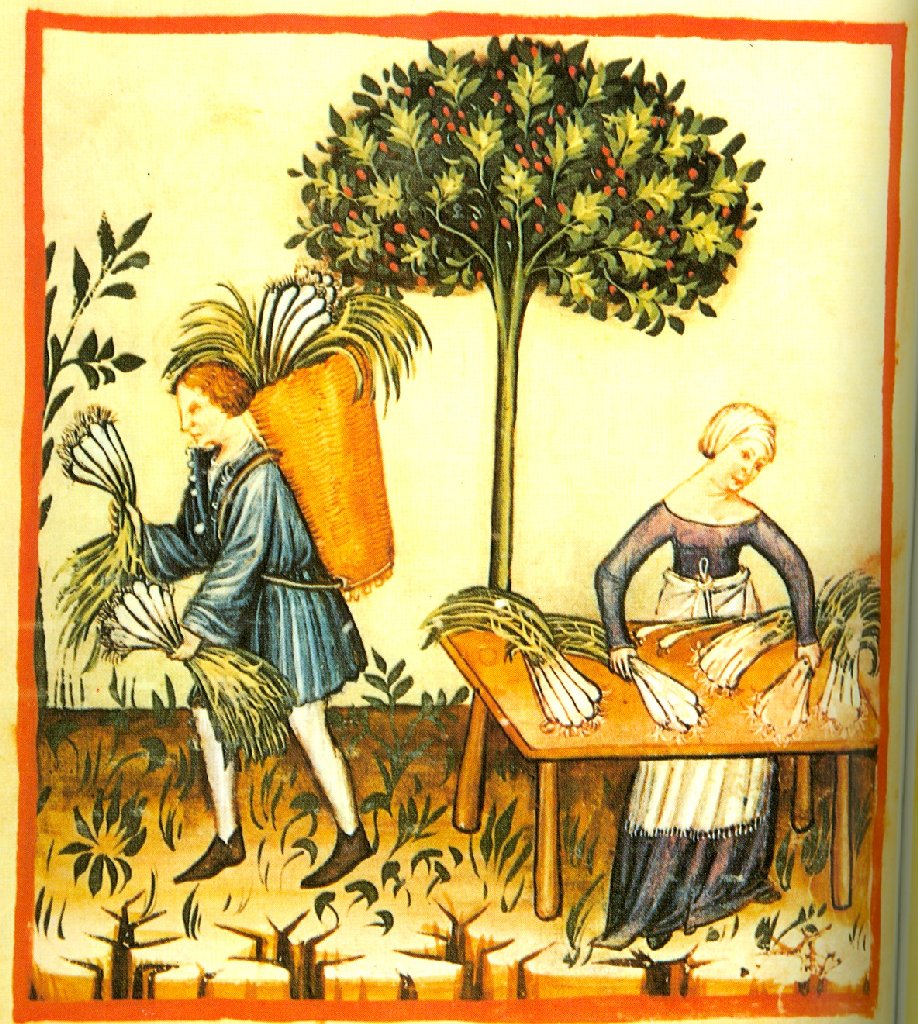 The terse paragraphs of the treatise were freely translated into Latin in mid-thirteenth-century Palermo or Naples, one of the prime sites for peaceable inter-cultural contact between the Islamic and European worlds.

"Magister Faragius" (Ferraguth) in Naples took responsibility for one translation into Latin, in a manuscript in the Bibliothèque Nationale, Paris, MS Lat. 15362 (noted by Witthoft 1978:58 note 9).

Four handsomely illustrated complete late fourteenth-century manuscripts of the Taccuinum, all produced in Lombardy, survive, in Vienna, Paris, Liège and Rome, as well as scattered illustrations from others.

As well as fifteenth-century codices, Carmelia Opsomer published a commented facsimile of the ms 1041 held in the library of the university of Liège. Un-illustrated manuscripts present a series of tables, with a narrative commentary on the facing pages. The Taccuinum was first printed in 1531.

The Tacuinum was very popular in Western Europe in the Late Middle Ages; an indication of that popularity is the use of the word taccuino in modern Italian to mean any kind of pocket handbook, guide, notebook.

In 2008, the Spanish publishing house M. Moleiro Editor published the first and only facsimile of the Tacuinum Sanitatis kept at the Bibliothèque nationale de France, in an edition limited to 987 copies. 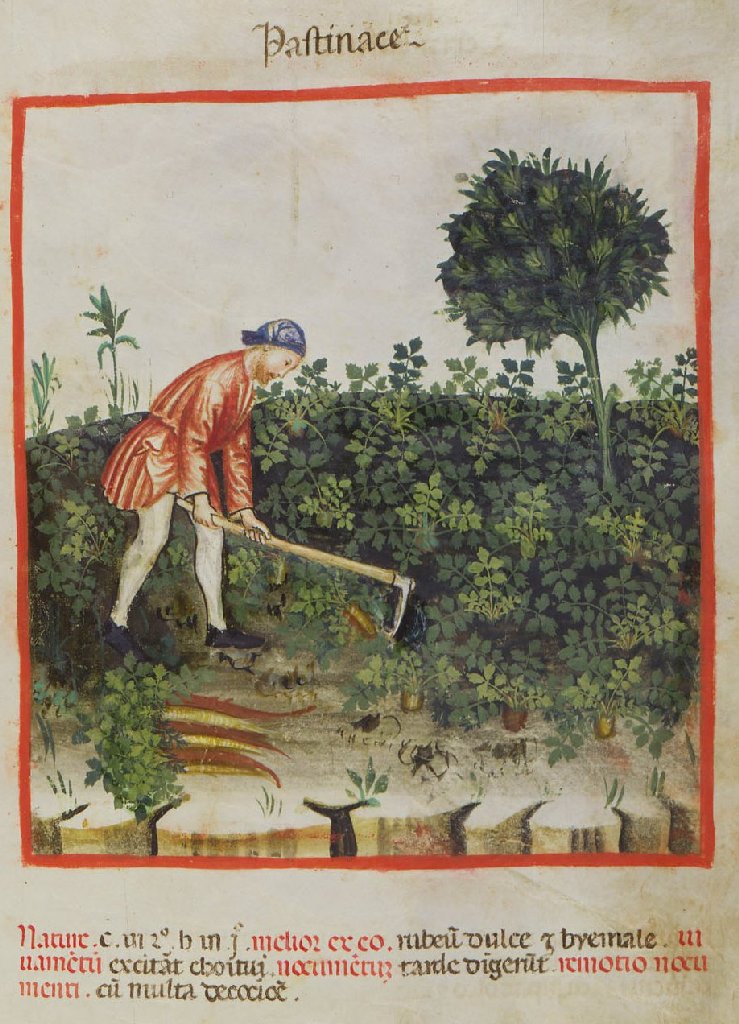 This LINK takes you to a website with the images and text from the following manuscripts:

The Tacuinum Sanitatis is about the six things that are necessary for every man in the daily preservation of his health, about their correct uses and their effects. The first is the treatment of air, which concerns the heart. The second is the right use of food and drinks. The third is the correct use of movement and rest. The fourth is the prohibition of the body from sleep, or excessive wakefulness. The fifth is the correct use of elimination and retention of humors. The sixth is the regulating of the person by moderating joy, anger, fear, and distress. The secret of the preservation of health, in fact, will be in the proper balance of all these elements, since it is the disturbance of this balance that causes the illnesses which the gloriuos and most exalted God permits. Listed under these six classifications are many very useful varieties whose nature, God willing, we shall explain. We shall speak, furthermore, about the choices suitable to each person owing to his constitution and age, and shall include all these elements in the form of simple tables because the discussions of the sages and the discordances in many different books may bore the reader. Men, in fact, desire from science nothing else but the benefits, not the arguments but the definitions. Accordingly, our intention in this book is to shorten long-winded discourses and synthesize the various ideas. Our intention also, however, is not to neglect the advice of the ancients. 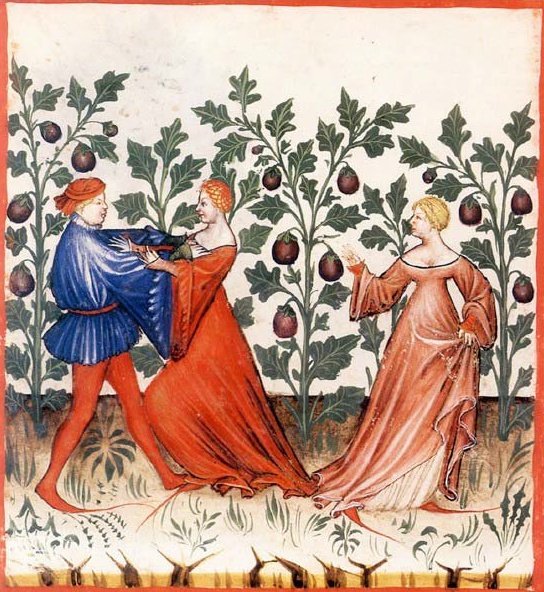