The following comes directly from Wikipedia 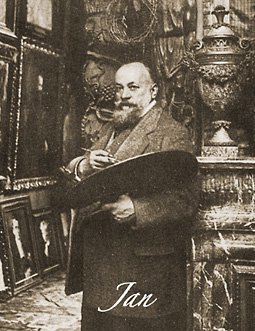 He was also an illustrator and poet. Jan was known as a great patriotic speaker - his speeches were printed in 1915 under the French title L'ame de la Pologne (The Soul of Poland).

Styka, son of an officer in Austria-Hungary, attended school in his native Lwów (Lemberg, now Lviv) then studied at the Academy of Fine Arts in Vienna, Austria following which he took up residence in Kraków in 1882 where he studied historical painting under Jan Matejko.

Next he came back to Lwów and opened a workshop there. Here, together with a celebrated Polish historical painter Wojciech Kossak, they created his most famous work in Poland - The Racławice Panorama. Later he travelled to Italy for a short time before moving to France where the great art movements at Montmartre and Montparnasse were taking shape and where he would spend a large part of his life. 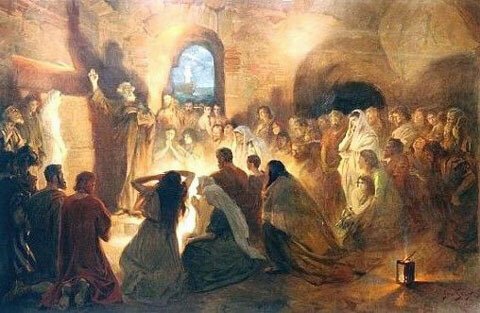 Among Styka's important works is the large scene of Saint Peter preaching the Gospel in the Catacombs painted in Paris in 1902. His renowned panoramas include "Bem in Siedmiogrod" (1897), "The Martydrom of Christians in Nero's Circus" (1897), and at the Wrocław Branch of the National Museum of Poland is the monumental collaboration "The Battle of Racławice" painted in 1894.

In 1910 Jan Styka painted a portrait of esteemed pianist and Polish statesman, Ignacy Jan Paderewski, which is now at the National Museum of Poland in Poznań. Previously, near the end of the 19th century, Paderewski had commissioned Styka to paint what would become his most famous work internationally. Originally entitled "Golgotha" (the Aramaic name for the site of Christ's crucifixion), the painting became known simply as "The Crucifixion." This piece is an enormous panorama standing 195 feet (59 m) long by 45 feet (14 m) in height.

"The Crucifixion" has a fascinating history. Upon its commission in 1894, Styka travelled to Jerusalem to prepare sketches, and to Rome, where his palette was blessed by Pope Leo XIII.

The painting was unveiled in Warsaw to great success on June 22, 1897. It was shown in many of the great cities of Europe, before making its way to America, to join the 1904 St. Louis Exposition.

The painting was seized when Styka's American partners failed to pay the customs taxes, and was considered lost for nearly forty years. In 1944 the painting was found, rolled around a telephone pole and badly damaged, having languished in the basement of the Chicago Civic Opera Company for decades.

Acquired by American businessman, Hubert Eaton, the painting was restored by Jan Styka's son, artist Adam Styka. It is on display in the Hall of the Crucifixion at Forest Lawn Memorial Park Cemetery in Glendale, California.

In 2005-2006 the painting underwent a massive restoration as part of Forest Lawn's centennial celebration.

Jan Styka died in 1925 and was buried in Rome. However, in 1959 Hubert Eaton arranged with Styka's family for his remains to be brought to the United States for interment in the "Hall of The Immortals" at Forest Lawn cemetery.

But he is not on the site for his paintings.  He sent a letter to Camille Flammarion on November 2nd 1920, describing a very strange experience that he had.