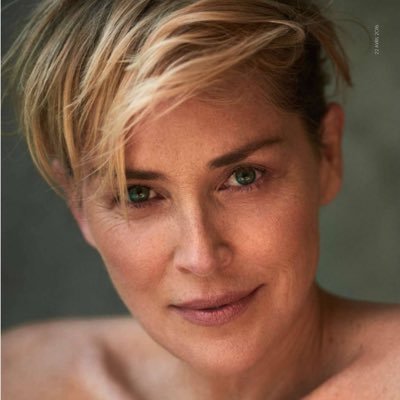 Stone first drew attention for her role in the mini-series War and Remembrance (1989) and early mainstream prominence followed with her part in Paul Verhoeven's Total Recall (1990).

She won the Golden Globe Award and was nominated for the Academy Award for Best Actress for her performance in Martin Scorsese's Casino (1995) and received two more Golden Globe Award nominations for her roles in The Mighty (1998) and The Muse (1999).  In a career spanning over three decades, Stone has had over one hundred acting credits in film and on television. She has won 10 awards from 41 nominations, including one Emmy Award (for The Practice), one Golden Globe Award (for Casino), and two MTV Movie Awards (for Basic Instinct).

Stone has appeared in the covers and photo session of over 300 celebrity and fashion magazines throughout her four-decade acting career; in 1986, she graced the June–July cover of French Vogue, and to coincide with the release of Total Recall, she posed nude for Playboy, “showing off the muscles she developed in preparation for the film”. Following Basic Instinct, photographer George Hurrell took a series of photographs of Stone, who was reportedly his last sitting before his death in 1992.

Why is she on the site?  She had a near death experience. 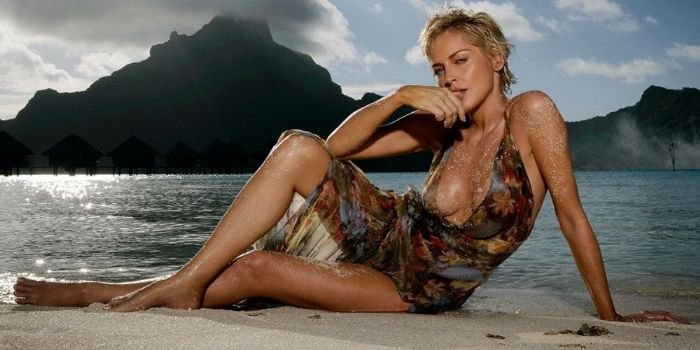 Near death experience and subsequent activism 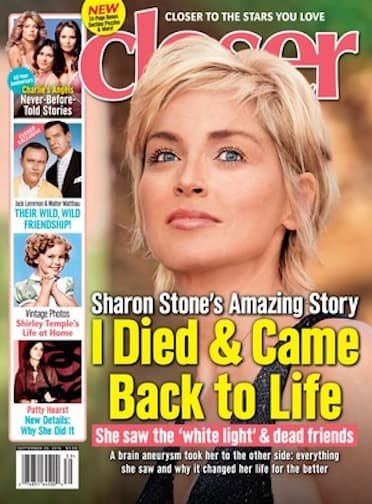 Stone was hospitalized on September 29, 2001, for a brain haemorrhage, which was diagnosed as a vertebral artery dissection rather than the more common ruptured aneurysm.

During interviews, Stone has revealed how she almost died from internal bleeding caused by the tear in the artery at the base of her skull sending her "into that vortex of white light" where she encountered dead friends.

About her brain haemorrhage, she says "When it hit me, I felt like I'd been shot in the head. That's the only way I can really describe it. It hit me so hard, it knocked me over on the sofa. And Phil was out of town and I called him and said, 'I think I had a stroke.'"

Stone's NDE occurred after the doctors performed an MRI on her.  She was unconscious in the MRI tube, and when she came out, the doctors were talking to her. Then her NDE happened:
"It’s sort of like passing out but you sort of pass up," she said. The observation provides more details of the experience itself.

Stone says the brain aneurysm changed everything for her and ushered in a dark period that ultimately gave her a new outlook on life.

"I had to learn to walk, hear, write, talk, remember and everything all over again," she says. "I thought that I was dying for a long time, even after I came home." 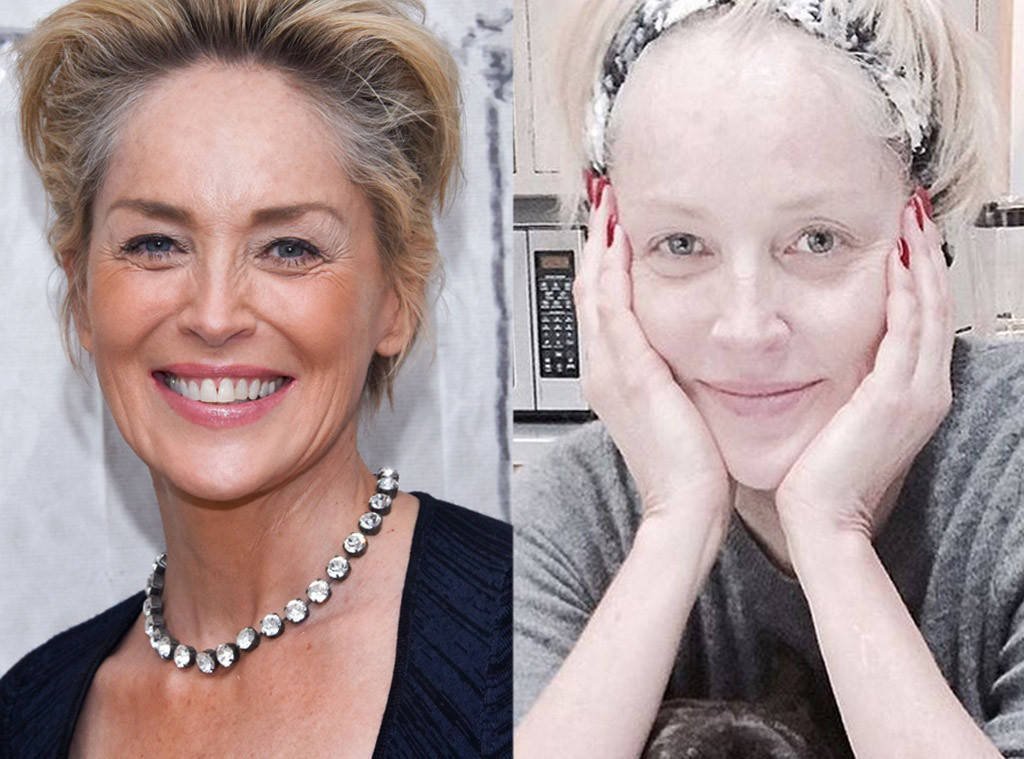 with and without make-up

In the years that followed, her life came apart at the seams. In 2004, Stone and her husband Phil Bronstein divorced. In 2008, he was granted full custody of their son.

"There was a part of me that felt like wow, I lost so much," Stone says. "My career was basically over, my family was over, I got divorced, my child was taken away -- a lot of my identity, I thought. I got down, down to it. And when I got down to it, it’s like being a phoenix. I was burned to the ground. Because everything I had been before, I thought, ‘I’m not any of those things anymore.'"

The NDE had a profound effect on Stone’s priorities and she became a campaigner on a number of issues, some of which earned her the sort of criticism to be expected when one opposes vested financial and power based interests.

On January 28, 2005, Stone helped solicit pledges for $1 million in five minutes for mosquito nets in Tanzania, turning a panel on African poverty into an impromptu fund-raiser at the World Economic Forum in Davos, Switzerland. This area is a minefield of corruption, with pharmaceutical companies in league with large so called charitable organisations to use pharmaceuticals as the main preventative against mosquitos.  But nets have been shown to be more cost effective and easier to use, more particularly as many of the pharmaceutical based options are now ineffective. 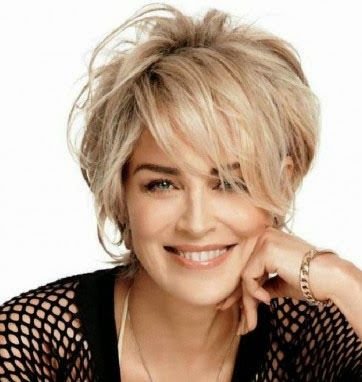 “Many observers, including UNICEF, criticized her actions by claiming that Stone had reacted instinctively to the words of Tanzanian President Benjamin Mkapa, and had not done her research on the causes, consequences and methods of preventing malaria.”

Laughably we then have the claim from officials that “this diverted funds from other UNICEF projects.”  Like the ones using pharmaceuticals which cost far far more.  Stone stuck to her guns and weathered the protest.

She has not only become involved in health campaigns, but also in peace initiatives.  In December 2006, Stone co-hosted the Nobel Peace Prize Concert in Oslo, Norway together with Anjelica Huston. The concert was in honour of the Nobel Peace Prize winner Muhammad Yunus for his social contribution in Bangladesh through Grameen Bank.

In March 2006, Stone travelled to Israel to promote peace in the Middle East through a press conference with Nobel Peace Prize winner Shimon Peres.  On October 23, 2013, Stone received the Peace Summit Award for her work with HIV/AIDS sufferers.

There is also something rather brave about the way she attempts to raise funds, using events for one thing and hijacking them for good causes.  In 2015, Stone was the guest of honour at the Pilosio Building Peace Award in Milan. She began an impromptu auction on stage in front of a crowd of CEOs from the construction industry and other dignitaries. She gained enough pledges to build 28 schools in Africa. 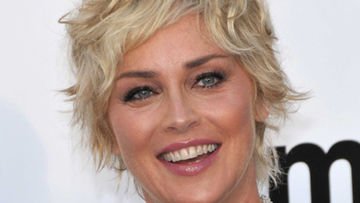 Sharon Yvonne Stone was born in Meadville, Pennsylvania, to Dorothy Marie (née Lawson; b. 1933), an accountant, and Joseph William Stone II (1930–2009), a tool and die manufacturer and factory worker. She has a sister, Kelly, and two brothers, Michael and Patrick Stone. She has some Irish ancestry. 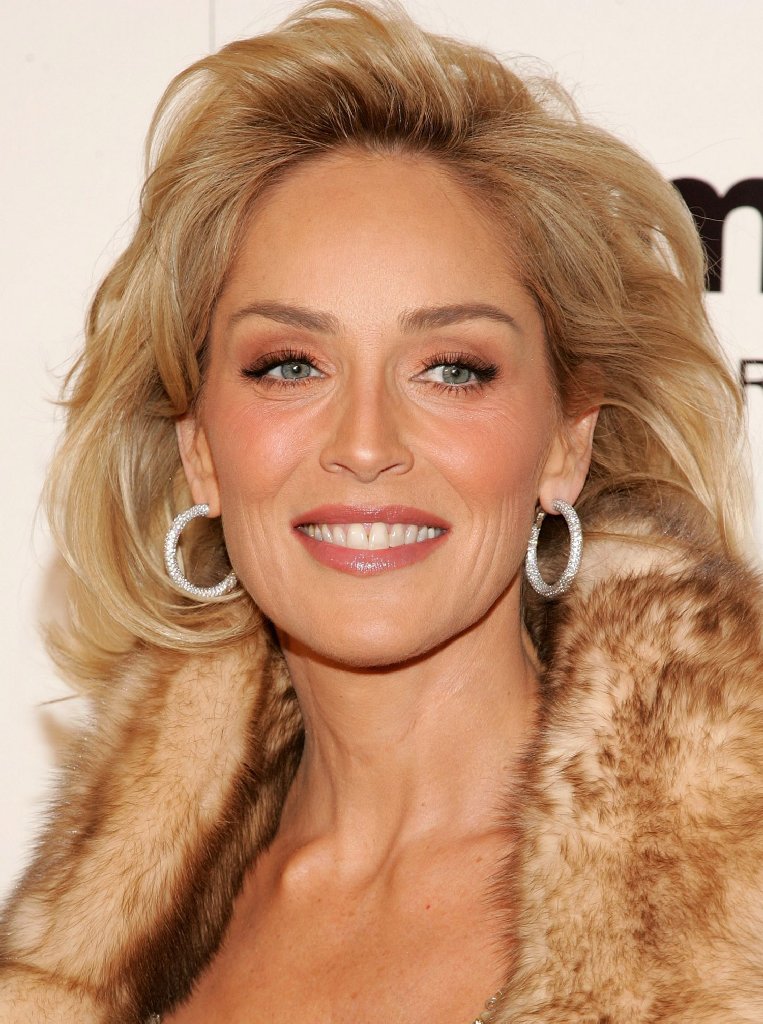 Stone was considered academically gifted as a child and entered the second grade when she was five years old.  She graduated from Saegertown High School in Saegertown, Pennsylvania in 1975.

While attending Edinboro University, Stone won the title of Miss Crawford County, Pennsylvania and was a candidate for Miss Pennsylvania. One of the pageant judges told her to quit school and move to New York City to become a fashion model and so in 1977, Stone left Meadville, moving in with an aunt in New Jersey and  was signed by Ford Modeling Agency in New York City.

Stone later moved to Europe and while living there, she decided to leave modeling and pursue acting. "So I packed my bags, moved back to New York, and stood in line to be an extra in a Woody Allen movie," she later recalled.

She met television producer Michael Greenburg in 1984 on the set of The Vegas Strip War, a television film he produced and she starred in. They were married in 1984. In 1986, Greenburg was her line producer on Allan Quatermain and the Lost City of Gold. The couple separated three years later, and their divorce was finalized in 1990.

In 1993, Stone met William J. MacDonald (aka Bill MacDonald) on the set of the film Sliver, which he co-produced. MacDonald left his wife Naomi Baca for Stone and became engaged to her. They separated one year later in 1994. While working on the film The Quick and the Dead in 1995, Stone met Bob Wagner (a first assistant director) and they became engaged, but later separated.

On February 14, 1998, Stone married Phil Bronstein, executive editor of The San Francisco Examiner and later San Francisco Chronicle. They adopted a baby son, Roan Joseph Bronstein, in 2000. Thus as one can see, the NDE in September 29, 2001 had an enormous impact on her approach to life, and to a certain extent her character.

As we saw, Bronstein filed for divorce in 2003, citing irreconcilable differences and the divorce became final in 2004, with a judge ruling that Roan should remain primarily with Bronstein, with Stone receiving visitation rights.  Nevertheless, this new softer Stone adopted her second son, Laird Vonne, in 2005, and her third son, Quinn Kelly Stone, in 2006. 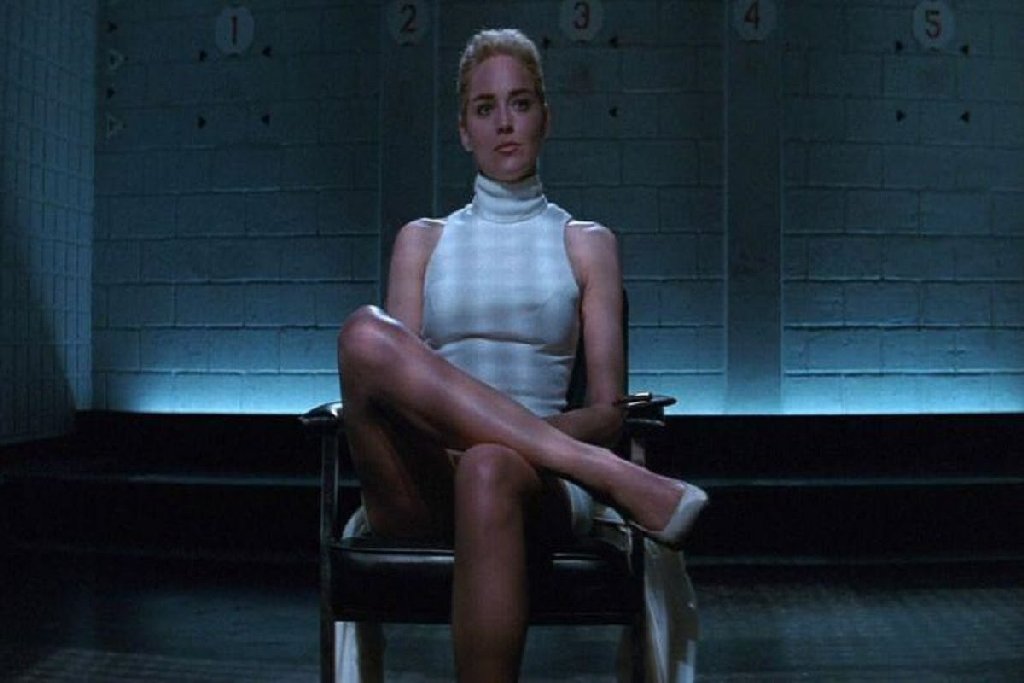 The effects of the NDE are extremely noteworthy in relation to her film roles.  Before the NDE, her film parts were largely based on her as a vamp-like lover and a seducer, calculating and ruthless, apparently ‘sexy’, or perhaps more correctly ‘siren-like’. In a number of films she is a murderer.   She has even appeared as a woman waiting on death row for a brutal double murder she committed in her teens in the little-seen drama Last Dance. This film received ‘lukewarm reviews’, probably because all titillation was absent. 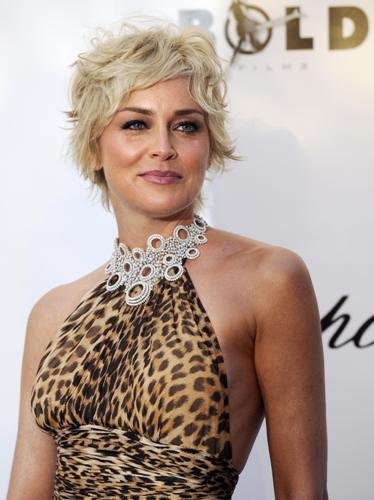 Although her post NDE films still use her attractiveness, the ruthlessness appears to have disappeared.

It is also intriguing that some of the more explicit scenes in her films now appear to cause her much embarrassment, and she has even attempted to rewrite history by claiming they were shot without her really knowing how explicit they would be.

On the other hand, although Stone rebelled post-NDE against the near pornographic, she appears to have  been far more interested in nudity and love making .

Basic Instinct 2 was released on March 31, 2006. Stone wanted more nudity while they wanted less. A group sex scene was cut in order to achieve an R rating and Stone told an interviewer, "We are in a time of odd repression and if a popcorn movie allows us to create a platform for discussion, wouldn't that be great?"

Her top-billing roles and some of the more notable films up to her NDE include: 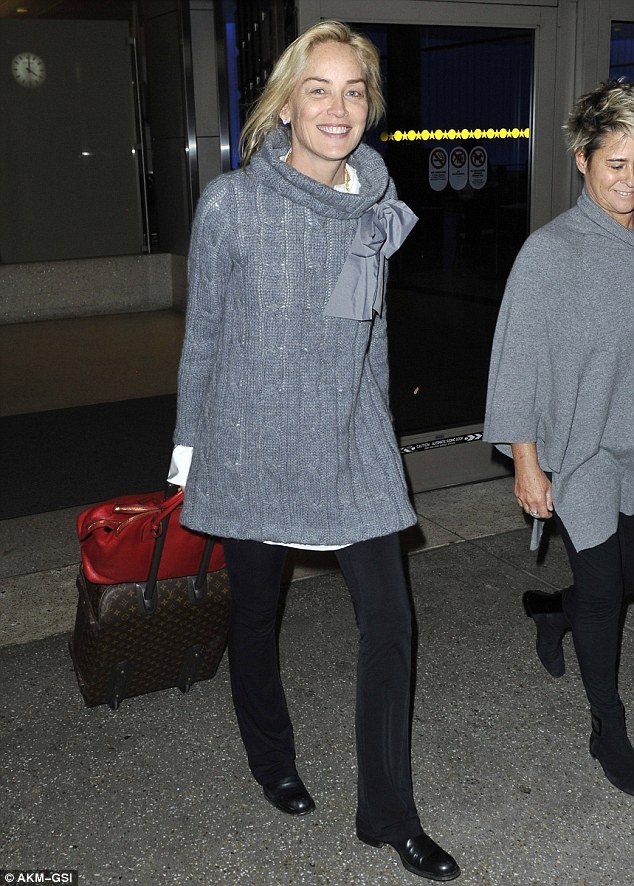 Following her hospitalization on September 29, 2001, for the brain haemorrhage, and the subsequent NDE, she took a break from screen acting, returning to the screen in 2003; in the year, she portrayed Sheila Carlisle, an attorney who believes she can communicate with God, in three episodes from the eighth season of The Practice. For her performance, she received an Emmy Award for Outstanding Guest Actress in a Drama Series.

Also in 2003, she appeared in a James Woods-directed American Stroke Association television commercial to raise awareness of the symptoms of stroke. This commercial was also shown in Canada.

Cold Creek Manor (2003), with Dennis Quaid, and Catwoman (2004), with Halle Berry were not successful.  One assumes that the public and those casting the roles assumed the post NDE Stone was the same as the pre NDE Stone and she clearly wasn’t.  But eventually Stone found her place in entirely different films: 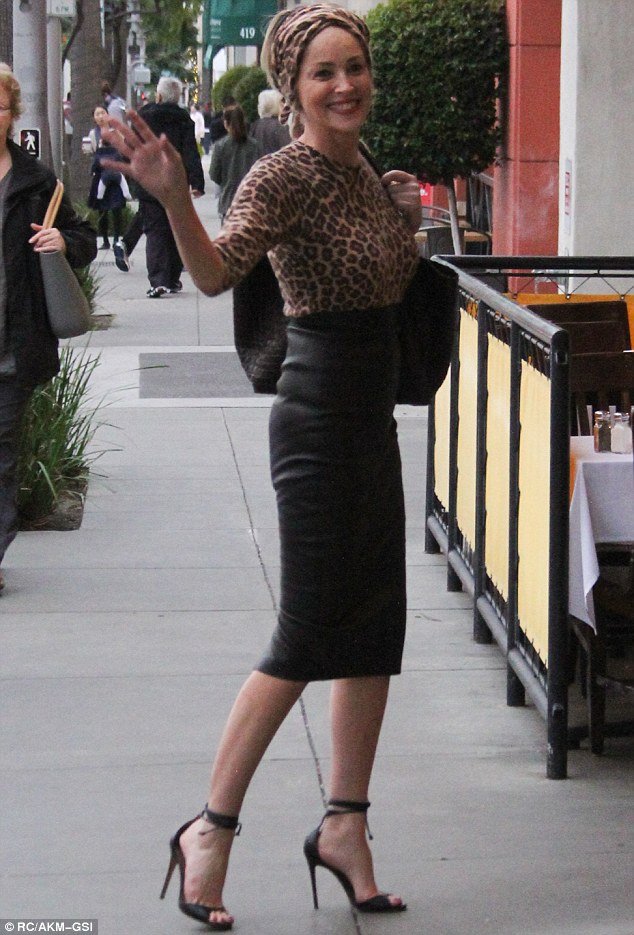 Her other roles are also interesting for their themes of justice.

She took on the leading female role in the French action sequel Largo Winch II as an United Nations investigator named Diane Francken.

Also in 2014, Stone headlined the action drama series Agent X, which aired only for one season on the TNT channel.

Her role was Natalie Maccabee, America's first female Vice President who takes the office after the death of her Senator husband.