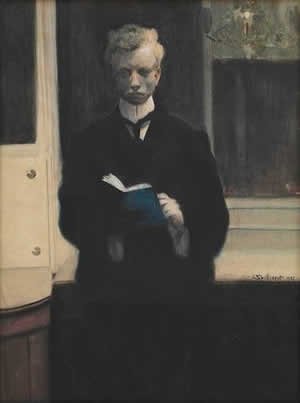 Léon Spilliaert (1881 –1946) was a Belgian symbolist painter and graphic artist.

Spilliaert was born in Ostend, the oldest of seven children of Léonard-Hubert Spilliaert, who was a perfumer, and Léonie (née Jonckheere). From childhood, he displayed an interest in art and drawing.

He was predominantly a self-taught artist.

Sickly and reclusive, he spent most of his youth sketching scenes of ordinary life and the Belgian countryside. When he was 21, he went to work in Brussels for Edmond Deman, a publisher of the works of symbolist writers, which Spilliaert was to illustrate. He especially admired the work of Edgar Allan Poe.

Watercolor, gouache, pastel, and charcoal—often in combination—were the means by which he produced many of his best works, among which are a number of monochrome self-portraits, executed in the early years of the twentieth century.

According to the book Symbolism by Michael Gibson and Gilles Neret, Spillaert suffered from chronic insomnia when he was producing his best works, but he also seems to have been suffering from melancholy – great sadness.  He frequently depicts lonely figures in dreamlike settings.

It is noticeable that his work became less spiritual and symbolic after he married and had a daughter [and was presumably happier].

His later work shows a concentration on seascapes. He died on 23 November 1946 in Brussels. 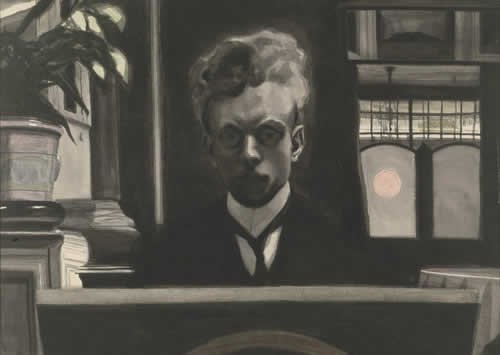