This description comes directly from Wikipedia, as it gives quite a good short summary of his life and needs no editing. 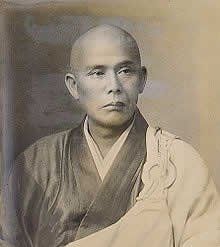 Soyen Shaku (釈 宗演, January 10, 1860 – October 29, 1919; written in modern Japanese Sōen Shaku or Kōgaku Sōen Shaku) was the first Zen Buddhist master to teach in the United States. He was a Roshi of the Rinzai school and was abbot of both Kenchō-ji and Engaku-ji temples in Kamakura, Japan. Shaku was a disciple of Imakita Kosen.

Soyen Shaku was an exceptional Zen monk. He studied for three years at Keio University. In his youth, his master, Kosen, and others had recognized him to be naturally advantaged. He received dharma transmission from Kosen at age 25, and subsequently became the superior overseer of religious teaching at the Educational Bureau, and patriarch of Engaku temple at Kamakura. In 1887, Soyen traveled to Ceylon to study Pali and Theravada Buddhism and lived the wandering life of the bhikkhu for three years. Upon his return to Japan in 1890, he taught at the Nagata Zendo. In 1892, upon Kosen's death, Soyen became Zen master of Engaku-ji.

In 1893 Shaku was one of four priests and two laymen, representing Rinzai Zen, Jōdo Shinshū, Nichirin, Tendai, and Esoteric schools, composing the Japanese delegation that participated in the World Parliament of Religions in Chicago organized by John Henry Barrows and Paul Carus. He had prepared a speech in Japan, and had it translated into English by his (then young and unknown) student D. T. Suzuki. It was read to the conference by Barrows. The subject was "The Law of Cause and Effect, as Taught by Buddha". Subsequently, Shaku delivered "Arbitration Instead of War".

Soyen served as a chaplain to the Japanese army during the Russo-Japanese War. In 1904, the Russian author Leo Tolstoy wrote to Shaku to join him in denouncing the war. Shaku refused, concluding that "...sometimes killing and war becomes necessary to defend the values and harmony of any innocent country, race or individual." (quoted in Victoria, 1997) After the war, Shaku attributed Japan's victory to its samurai culture.

In 1905, Soyen Shaku returned to America as a guest of Mr. and Mrs. Alexander Russell. He spent nine months at their house outside San Francisco, teaching the entire household Zen. Mrs. Russell was the first American to study koans. During this time he also gave lectures, some to Japanese immigrants and some translated by D. T. Suzuki for English speaking audiences, around California. Following a March 1906 train trip across the United States, giving talks on Mahayana translated by Suzuki, Soyen returned to Japan via Europe, India and Ceylon.

Soyen Shaku died peacefully on 29 October 1919 in Kamakura. His message of peace, honour and respect for self and others is still cherished by his followers in USA, Japan and other places.