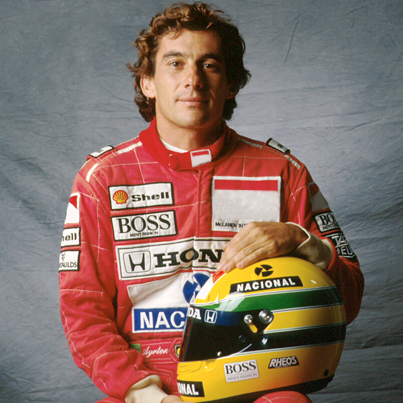 Ayrton Senna da Silva (21 March 1960 – 1 May 1994) was a Brazilian racing driver who won three Formula One world championships for McLaren in 1988, 1990 and 1991 and is regarded as one of the greatest Formula One drivers of all time.  Senna was born in São Paulo, the middle child of wealthy Brazilian landowner and factory owner Milton da Silva and his wife Neide Senna da Silva. He was left-handed.

He was killed in an accident while leading the 1994 San Marino Grand Prix for Williams, aged 34.

Senna developed an interest in cars and motor racing at the age of four. At the age of seven, he learned to drive a Jeep around his family's farm. At the age of 13, he began racing go-karts.  Senna's first kart was built by his father using a small 1-HP lawnmower engine. Senna went on to win the South American Kart Championship in 1977. He contested the Karting World Championship each year from 1978 to 1982, finishing runner-up in 1979 and 1980.

Senna then moved up to open-wheel racing in 1981, winning the British Formula 3 championship in 1983. He made his Formula One debut with Toleman-Hart in 1984, before moving to Lotus-Renault the following year and winning six Grands Prix over the next three seasons. 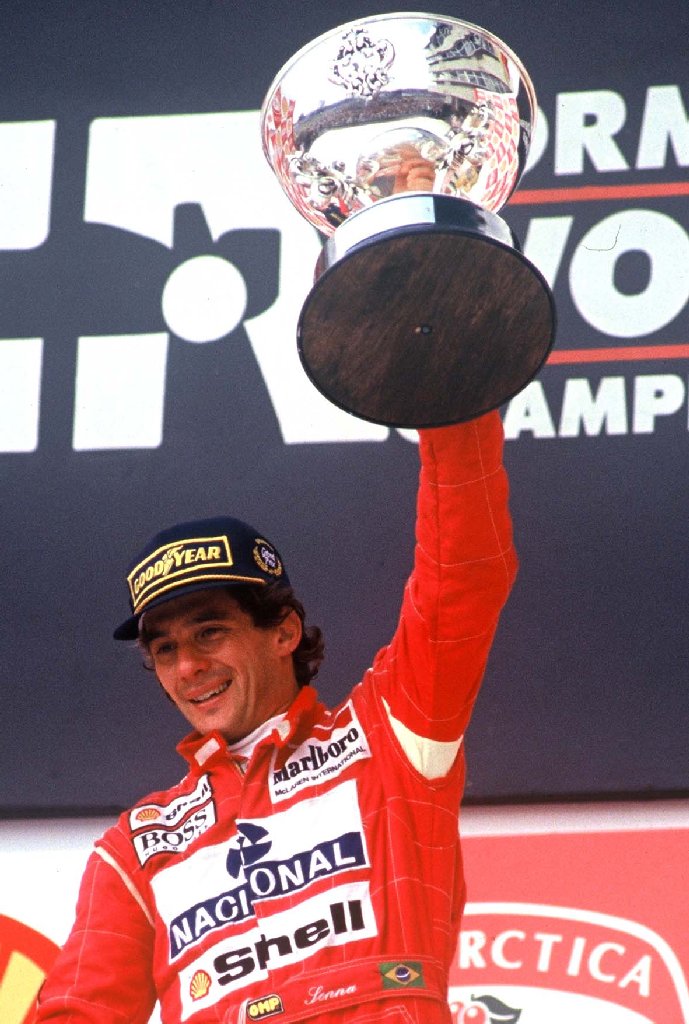 In 1988, he joined Frenchman Alain Prost at McLaren-Honda. Between them, they won all but one of the 16 Grands Prix that year and Senna claimed his first World Championship.

During the 1988 season, Senna rewrote the record books. His eight wins beat the old record of seven jointly held by Jim Clark (1963) and Prost (1984). His 13 pole positions also beat the record of nine held by Nelson Piquet (1984).

Prost claimed the World Championship in 1989, and Senna his second and third championships in 1990 and 1991. In 1991, Senna became the youngest ever three-time world champion, taking seven wins and increasing his pole position record to 60 from 127 events.

In 1992, the Williams-Renault combination began to dominate Formula One. Senna nonetheless managed to finish the 1993 season as runner-up, winning five races and negotiating a move to Williams in 1994.

Senna has often been voted as the best and most influential Formula One driver of all time in various motorsport polls. He was recognised for his qualifying speed over one lap, and from 1989 until 2006 held the record for most pole positions. He was also acclaimed for his wet weather performances, such as the 1984 Monaco Grand Prix, the 1985 Portuguese Grand Prix, and the 1993 European Grand Prix.

He holds a record six victories at the Monaco Grand Prix, and is the fifth-most successful driver of all time in terms of race wins.

Senna was also an active Christian in that he lived his beliefs.  After expressing concern over the poor in Brazil, he quietly donated millions of his personal fortune (estimated at around $400 million) to help poor children. Shortly before his death, he created the framework for an organisation dedicated to Brazilian children, which later became the Instituto Ayrton Senna (IAS).  The IAS has since invested nearly US$80 million over the last 12 years in social programs to help children and teenagers from low-income backgrounds.

He was a lover of animals and a believer in the need for conservation.  Senna owned several properties, but one was an organic farm in Tatuí, Brazil. 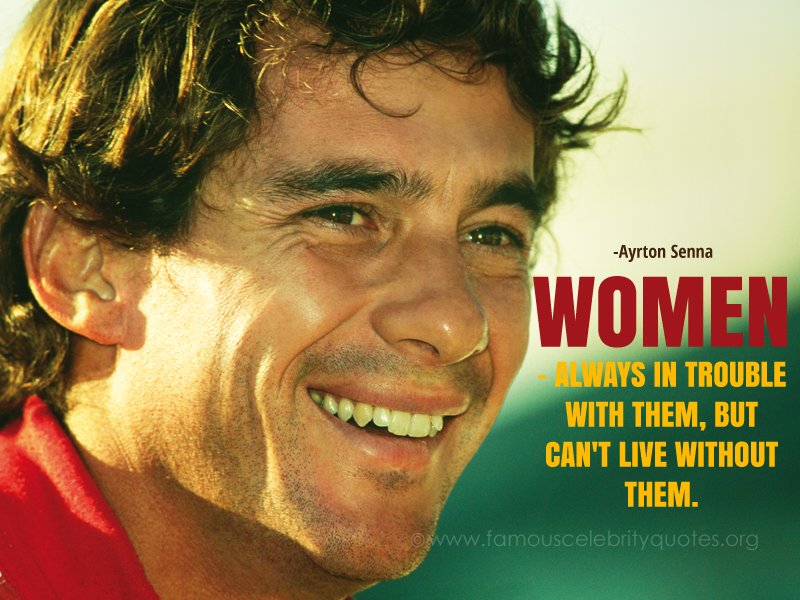 It is a common attribute of the very gifted and spiritually minded that they love, and they love a lot, as a consequence they are not very good at conventional marriage.  Ayrton loved his friends and he loved his women.  Senna was married to his childhood sweetheart Lilian de Vasconcelos Souza from 1981 until 1982. Lilian “had difficulty adapting to her husband's racing life ..she later said: ‘I was his second passion. His first passion was racing... There was nothing more important in the world for him, not family, not wife, nothing.’"  The marriage ended in divorce.

Senna then had relationships with Adriane Yamin, Brazilian TV star Xuxa, Christine Ferracciu, American model Carol Al, model Marjorie Andrade, Elle Macpherson and finally TV personality, Adriane Galisteu his girlfriend at the time of his death.  So passion, one suspects, played a big part in how he obtained his inspiration. 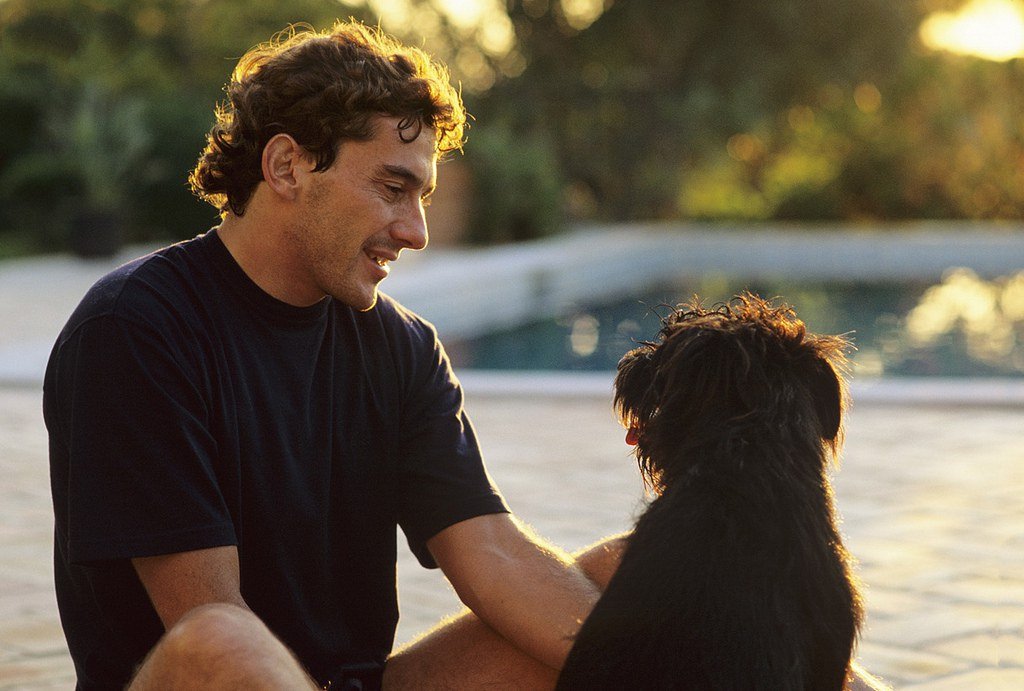 Senna was exceptionally competitive, but at the same time very emotional and compassionate.  He had a very big heart.  Whilst qualifying for the Belgian Grand Prix, for example, French driver Érik Comas crashed heavily and Senna was the first to arrive at the scene. He got out of his car and ran across the track to help the Frenchman, disregarding his own safety in an effort to aid a fellow driver. He later went to visit Comas in the hospital. “His actions won universal praise from those in Formula One”.

This was not an isolated incident.  Senna's compatriot and protégé Rubens Barrichello was involved in a serious accident when his Jordan became airborne at the Variante Bassa chicane and hit the tyre-wall and fence. Barrichello suffered a broken nose and arm, and withdrew from the event. Barrichello reported that Senna was the first person he saw upon regaining consciousness.

And when Austrian rookie Roland Ratzenberger was killed after the front wing of his Simtek-Ford broke entering the 310 km/h (190 mph) Villeneuve corner, sending the car into a concrete wall, Senna immediately visited the accident scene and medical centre. There he was met by FIA Medical Chief Professor Sid Watkins, “who suggested to a tearful Senna to retire from racing and go fishing (a hobby they both shared), to which Senna replied that he could not stop racing”.

Frank Williams notably recalls that as good a driver as Senna was, ultimately "he was an even greater man outside of the car than he was in it." 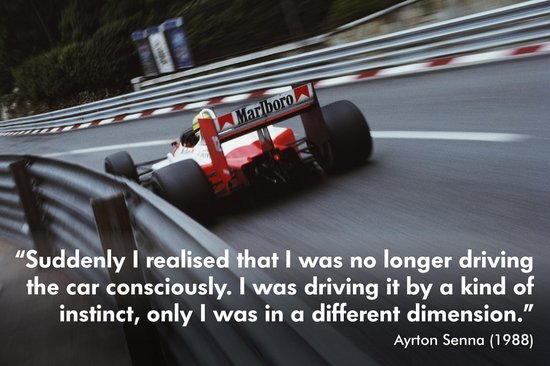 One of the most fascinating aspects about Ayrton is that he used racing driving as a means of obtaining spiritual experience.

In order to obtain an experience it is essential that one stops the chattering memory, squashes the ego and ‘lets go control’ to a higher power.  It is somewhat similar to the instruction given to Luke in Star Wars – go with the force.  And Ayrton went with the force.

"The harder I push, the more I find within myself. I am always looking for the next step, a different world to go into, areas where I have not been before. It's lonely driving a Grand Prix car, but very absorbing. I have experienced new sensations, and I want more. That is my excitement, my motivation."

Senna was capable of going out of body and used the faculty of pure enhanced perception to judge distances and course and car details.  Senna's first F1 race engineer was a man called  Pat Symonds, and we have an observation about the US Grand Prix in Dallas, where Symonds recollects what happened.

Senna also appeared to have no fear of death.  He had numerous accidents, and appeared to almost court disaster.  Before the Mexican Grand Prix, for example, Senna was injured in a jet-skiing accident near São Paulo for which he required stitches on the back of his head. Despite this, whilst qualifying for that Grand Prix, he attempted to take the banked 180-degree Peraltada corner (Mexico City circuit's fastest corner) faster than normal, ending up spinning off the track and rolling over the car after crashing into a tyre barrier.

During practice for the second race of the 1992 season in Mexico, his car hit a bump that caused a loss of downforce and he crashed hard into a concrete retaining wall. He had to be extricated from the car by circuit doctors.  Despite this, he raced the next day.

Our other observation comes from Damon Hill’s autobiography.  Damon knew Ayrton from their time with Williams.  Senna joined the Williams team in 1994, after the retirement of Prost. Senna raced in 1994 with number 2 and teammate Damon Hill raced with number 0. 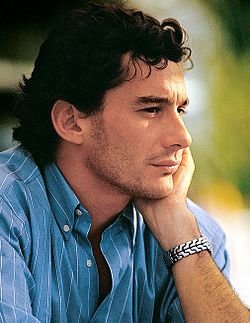 There is something very eerie about Senna’s expressed discomfort with the handling of his Williams car, he said,

"I have a very negative feeling about driving the car and driving it on the limit and so on ... Some of that is down to the lack of electronic change. Also, the car has its own characteristics which I'm not fully confident in yet…. It's going to be a season with lots of accidents, and I'll risk saying that we'll be lucky if something really serious doesn't happen."

Senna died aged 34 after succumbing to fatal injuries sustained during his final race at the San Marino Grand Prix, on 1 May 1994.  One can say he knew because logic was telling him so, but it is almost as if he was prophesying his own death.  Can it be mere coincidence that only a few months before his death, Senna had discussed with his sister, Viviane Senna, about setting up the IAS?

As Senna rounded the high-speed Tamburello corner on lap 7, his car left the racing line at around 307 km/h (191 mph), ran in a straight line off the track, and hit the concrete retaining wall at around 233 km/h (145 mph), after what telemetry showed to be an application of the brakes for around two seconds. At 18:40, the head of the hospital's emergency department, Dr Fiandri made the announcement that Senna had died, and said the official time of death was 14:17, which is when he impacted the wall.

Ayrton Senna's resting place at the Morumbi cemetery in São Paulo, has an inscription in Portuguese that reads "Nothing can separate me from the love of God".  Home at last. 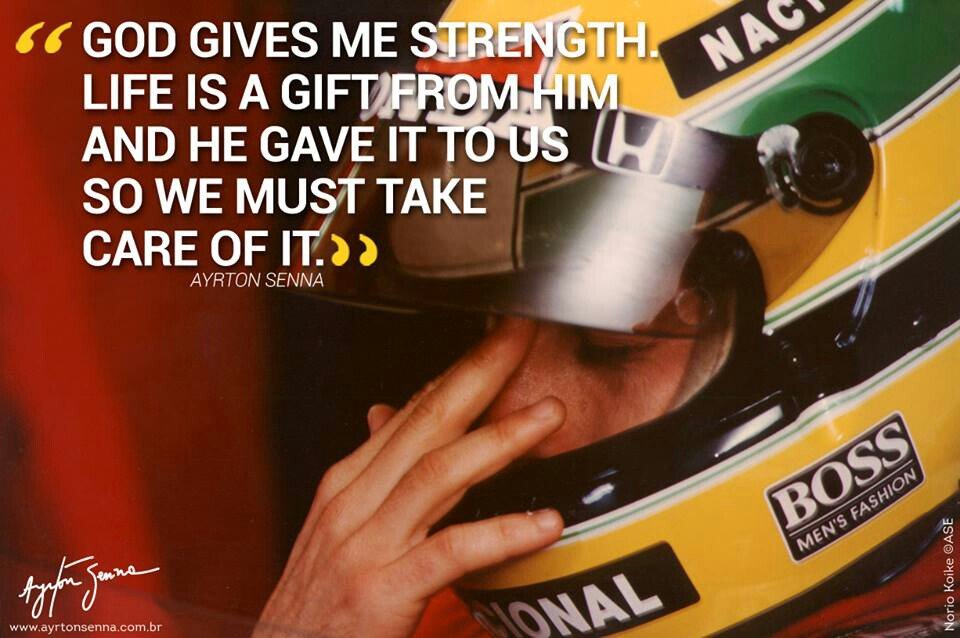