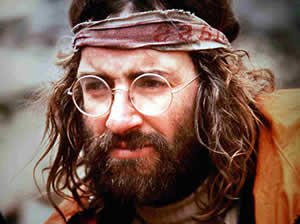 Douglas Keith Scott CBE, known as Doug Scott (born 29 May 1941), is an English mountaineer noted for the first ascent of the south-west face of Mount Everest on 24 September 1975 in an expedition led by Chris Bonington. Scott and Dougal Haston were the first Britons to climb Everest during this expedition. In receiving one of mountaineering's highest honours, the Lifetime Achievement Piolet d'Or, his personal style and climbs were described as "visionary".

Scott was born in Nottingham, England and started climbing at the age of 12, his interest sparked by a school trip to the White Hall outdoor activities centre near Buxton.  Scott's mountaineering career includes over 30 expeditions to inner Asia and he is regarded as one of the world's leading high altitude and big wall climbers. Apart from Everest, all of his other climbs have been in the lightweight alpine style.  Highlights of Scott's climbing career include:

1975: South-west face of Everest with Dougal Haston, bivouac on the south summit at 8760 m.
1977: Baintha Brakk, more commonly known as The Ogre (in Pakistan), and descent with both legs broken at the ankle.
1978: Attempt of the west side of K2.
1979: North ridge of Kangchenjunga (8586 m).
1979: Ascent of the north side of Nuptse with Georges Bettembourg, Brian Hall and Alan Rouse.

Scott has climbed the Seven Summits, the highest peak on each of all seven continents. He is a past President of the Alpine Club and was made a CBE in 1994. In 1999 he was awarded the Patron’s Medal of the Royal Geographical Society. He was presented with the Golden Eagle Award by the Outdoor Writers and Photographers Guild in 2005. He was awarded an honorary MA by the University of Nottingham in 1991.

During Scott's climbing career, his understanding of the culture and the people in the regions where he climbed grew as he formed strong bonds and relationships. Scott founded the charity Community Action Nepal and spends much of his time fundraising for this cause, especially from giving public lectures. Scott is also an advocate of Responsible Tourism. Scott set up his own trekking agency in 1989, which is noted for its excellent treatment of porters.