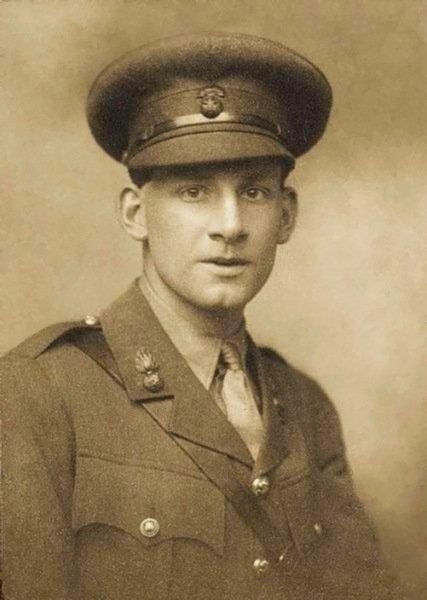 Decorated for bravery on the Western Front,  he became one of the leading poets of the First World War. His poetry both described the horrors of the trenches, and satirised the patriotic pretensions of those who, in Sassoon's view, were responsible for a jingoism-fuelled war.

Sassoon volunteered in 1914, but broke his arm badly in a riding accident and was put out of action before even leaving England, spending the spring of 1915 convalescing.

He was commissioned as a second lieutenant on 29 May 1915.

On 1 November his younger brother Hamo was killed in the Gallipoli Campaign and in the same month Siegfried was sent to the 1st Battalion in France.

Sassoon soon became horrified by the realities of war, and the tone of his writing changed completely: where his early poems exhibit a romantic idealistic view of war, his later poetry became increasingly discordant as he tried to convey the ugly truths of the trenches to an audience lulled by patriotic propaganda. His philosophy of 'no truth unfitting' had a significant effect at the time.

As a consequence, Sassoon became a focal point for dissent within the armed forces, more specifically when he made a lone protest against the continuation of the war in his "Soldier's Declaration" of 1917, culminating in his admission to a mental hospital. Sassoon later won acclaim for his prose work, notably his three-volume fictionalised autobiography, collectively known as the "Sherston trilogy".

Siegfried Sassoon died one week before his 81st birthday, and is buried at St Andrew's Church, Mells, Somerset.

Sassoon had a privileged childhood in Kent, where he developed a lifelong passion for poetry and for sport, especially cricket and hunting. He studied briefly at Cambridge and in August 1914 volunteered as a trooper in the Sussex Yeomanry.

The following year he was commissioned into the Royal Welsh Fusiliers. Sassoon proved an exceptionally brave and sometimes reckless officer, earning himself the nickname 'Mad Jack’. He was awarded the Military Cross for gallantry in action. He was wounded in April 1917 and sent back to Britain to recover. Disillusioned by the war, and under the influence of Bertrand Russell and other intellectual pacifists, he publicly refused to continue in his military duties. The reason, he announced in a statement read out in Parliament, was that 'the war upon which I entered as a war of defence and liberation, has now become a war of aggression and conquest'. 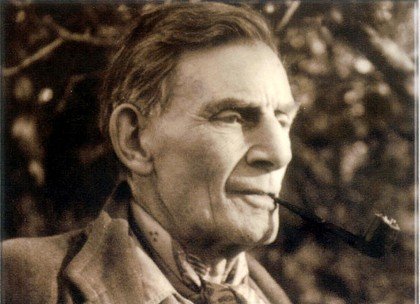 Unknown to Sassoon, Robert Graves intervened with senior officers to have him diagnosed as having a 'mental breakdown' due to shell shock, to save him from facing a court martial – an action which was to sour their friendship. Sassoon was sent for treatment to Craiglockhart Hospital, where he became friends with fellow patient Wilfred Owen. He later returned to front line service.

After the war he devoted himself to writing poetry and a series of celebrated memoirs, including Memoirs of an Infantry Officer (1930).