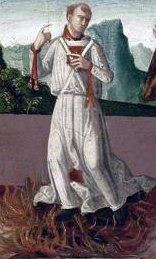 Saint Peter Igneus (long only venerated as Blessed) was an Italian Benedictine monk of the congregation of the Vallombrosians, abbot and Cardinal Bishop of Albano.

He is often referred to as a member of the Aldobrandini family but this familiar denomination is not attested in the contemporary sources.

The struggle waged against simony in the eleventh century led to violent scenes in several Italian cities. At Florence, Bishop Peter Mezzobarbo, known also as Peter of Pavia, (not to be confused with Pietro da Pavia who lived a century later) was publicly accused of simoniacal acquisition of the episcopal dignity. As he strenuously denied the charge and had numerous and prominent supporters, the controversy caused intense agitation at Florence. The Vallombrosian monks were his chief accusers, and upon the insistence of the people for proof, the judgment of God, or trial by fire, was resorted to. The Abbot St. John Gualbert designated for the test Peter Aldobrandini, who successfully underwent the ordeal (1068), hence called "Igneus", or Fire-tried. This triumph of the monks was followed by confession on the part of the bishop.

Peter Igneus subsequently became abbot of S. Salvatore in Fucecchio (retained the post until 1081), and in 1072 Cardinal Bishop of Albano.

During the pontificate of Gregory VII he was entrusted with important missions. In 1079 he proceeded to Germany as papal legate with the Bishop of Padua to mediate between the rivals Emperor Henry IV and Rudolf of Swabia. Upon the renewal of the excommunication against Henry IV at Salerno in 1084, Pope Gregory VII designated him as one of the two envoys sent to France for the promulgation of the sentence. He subscribed the bull of Urban II on July 8, 1089 and is attested for the last time in the papal curia in September 1089.