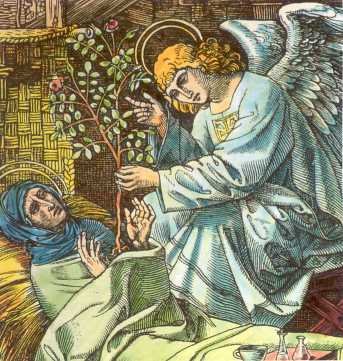 She is the patron saint of ice skaters and the chronically ill, as well as of the town of Schiedam. Her feast day occurs on 18 March, 14 April, or 14 June, depending on region and tradition.

Lidwina's grave became a place of pilgrimage after her death and in 1434, a chapel was built over it.  But it was only on 14 March 1890, that she was officially canonized by Pope Leo XIII. In 1859 the Church of Our Lady of Visitation (Onze Lieve Vrouw Visitatie) was opened on the Nieuwe Haven in Schiedam, commonly called Frankelandsekerk after the area it was located in (West-Frankeland). In 1931 this church was officially dedicated to St. Lidwina and called Church of Lidwina (Lidwinakerk). 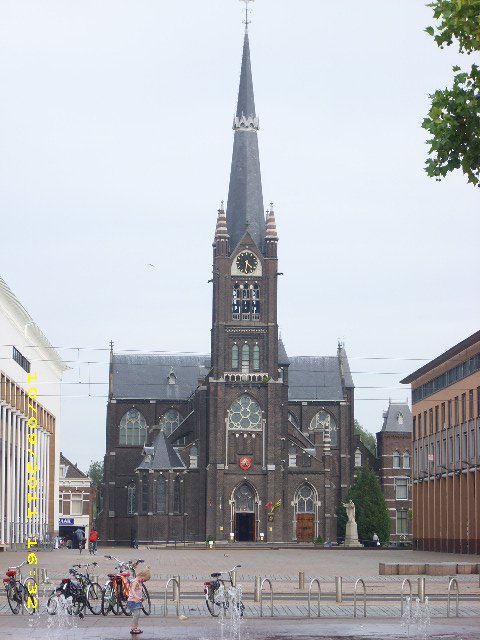 The church, however, was demolished in 1969, and the veneration of Lidwina was moved to the Singelkerk, hence known as the Church of St. Lidwina and Our Lady of the Rosary. This church was elevated to become a minor basilica on 18 June 1990 by Pope John Paul II. The church is now commonly known as the Basilica of Lidwina.

After the closure of the Church of Lidwina in 1969, the statue of the saint and her relics were removed to the chapel dedicated to her in the rest-home West-Frankeland on the Sint Liduinastraat in town. Only after the demolition of the chapel in 1987 were all devotional objects removed to the Singelkerk, i.e. the Basilica of Lidwina.

Lidwina's name is attached to numerous institutions in Schiedam. Since 2002, the Foundation Intorno Ensemble produces a bi-annual musical theatrical performance about the town saint in one of the Schiedam churches. Outside Schiedam, there is a modern (1960s) church in the Dutch town of Best carrying her name (Lidwina Parochie Best). 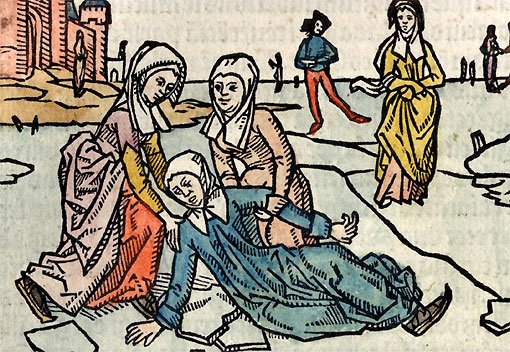 At age 15, Lidwina was ice skating when she fell and broke a rib.

She never recovered and became progressively disabled for the rest of her life. Her biographers state that she became paralyzed except for her left hand, that great pieces of her body fell off, and that blood poured from her mouth, ears, and nose. One conjecture is that she may have punctured her lungs and damaged the nervous system in that area, and as the rib was not repaired it just got worse.

Lidwina’s disease began soon after her fall, she developed walking difficulties, headaches and violent pains in her teeth. By the age of 19, both her legs were paralysed and her vision was disturbed.  Over the next 34 years, Lidwina's condition slowly deteriorated, although with apparent periods of remission, until her death at the age of 53.

Wikipedia
After her fall, Lidwina fasted continuously and acquired fame as a healer and holy woman. The town officials of Schiedam, her hometown, promulgated a document (which has survived) that attests to her complete lack of food and sleep. At first she ate a little piece of apple, then a bit of date and watered wine, then river water contaminated with salt from the tides. The authenticating document from Schiedam also attests that Lidwina shed skin, bones, parts of her intestines, which her parents kept in a vase and which gave off a sweet odour. These excited so much attention that Lidwina had her mother bury them.

Lidwina died at the age of 53. She is known as the patron saint of ice , skaters, disease and suffering.