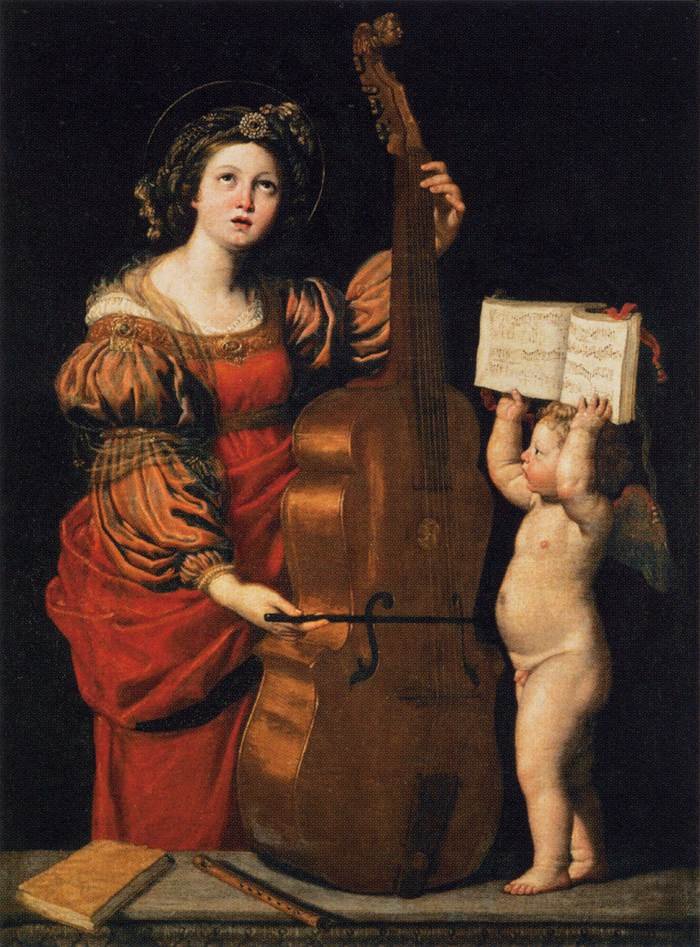 Saint Cecilia (Latin: Sancta Caecilia) is the patroness of musicians.

She is also one of the most famous of the Roman martyrs, however, the story about her is believed to have been invented, although her existence is not disputed.

Her feast day is celebrated in the Latin Catholic, Eastern Catholic, Anglican, and Eastern Orthodox churches on November 22.  Her feast day has been celebrated since about the fourth century.  A number of musical compositions are dedicated to her, and her feast day, became the occasion for concerts and musical festivals.  She is one of seven women, excluding the Blessed Virgin, commemorated by name in the Canon of the Mass.

Wikipedia
While the details of her story appear to be fictional, her existence and martyrdom are considered a historical fact. She is said to have been beheaded with a sword. … According to Johann Peter Kirsch, 'while it is a pious romance, like so many others compiled in the fifth and sixth century, the existence of the martyrs is a historical fact'.

According to the story, despite her vow of virginity, she was forced by her parents to marry a nobleman named Valerian. During the wedding, Cecilia sat apart singing to God in her heart. 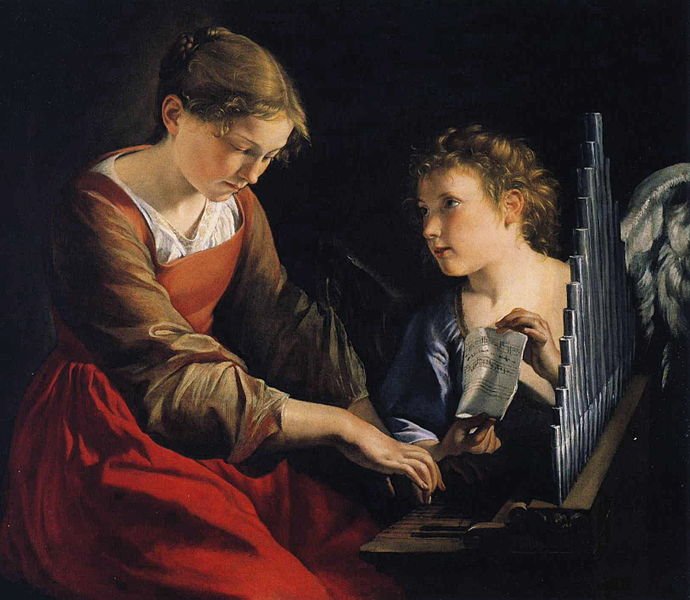 When the time came for her marriage to be consummated, Cecilia told Valerian that she had an angel of the Lord watching over her who would punish him if he dared to violate her virginity, but who would love him if he could respect her maidenhood. When Valerian asked to see the angel, Cecilia replied that he would see the angel if he would go to the third milestone on the Via Appia (the Appian Way) There he found an angel standing by the side of Cecilia, and crowning her with a chaplet of roses and lilies.

The martyrdom of Cecilia is said to have followed that of Valerian and his brother by the prefect Turcius Almachius. The legend about Cecilia’s death says that after being struck three times on the neck with a sword, she lived for three days, and asked the pope to convert her home into a church.  It is worth adding that being beheaded is symbolic.

Wikipedia
The relation between St. Cecilia and Valerianus, Tiburtius, and Maximus, mentioned in the Acts of the Martyrs, has perhaps some historical foundation.  It was long supposed that she was a noble lady of Rome who, with her husband Valerian, his brother Tiburtius, and a Roman soldier named Maximus, suffered martyrdom in about 230, under the Emperor Alexander Severus. The research of Giovanni Battista de Rossi agrees with the statement of Venantius Fortunatus, Bishop of Poitiers (d. 600), that she perished in Sicily under Emperor Marcus Aurelius between 176 and 180.

We would not normally have included a person whose story is largely legend, but there is one aspect relating to Saint Cecilia that is more important than either her martyrdom or the visions of her partner and that is the fact she was a composer of music and heard celestial music.

St Cecilia, known now as the patron saint of music, was a Christian martyr who met her death by beheading c. 176 AD. Her association with music seems to date from the thirteenth century, when a cult developed from the various legends which had grown up around her, most of which came to include some reference to her musical gifts. In Renaissance works of art, she is depicted playing the organ and singing, although her legend says that she sang 'in her heart to the Lord alone'.
The liturgy of St Cecilia includes the phrase 'singing in the heart' and associates this inner music with transformation or conversion. In this bare outline of the story of St Cecilia, we can see some of the universal attributes of music - emotional expressiveness, connection to the inner life, and the power to bring about change.


In this sense, therefore, it is not Saint Cecilia herself who is the focus but what her name and legend inspired in others – the idea that musical inspiration is derived from spiritual experience – it is a ‘gift from God’ and that music can also heal, both emotionally and physically.

Musicians themselves well recognise the association.  In some senses, Saint Cecilia is equivalent to the Greek muse of music, the spirit that inspires.  David Byrne and Brian Eno's song "The River", on the album Everything that Happens Will Happen Today, mentions St. Cecilia's Day.

Paul Simon's "Cecilia" is not about a lass who hops from one lover to another at a whim, but at how the muse can leave you suddenly and thus the difficulties of composing.

Cecilia, you're breaking my heart
You're shaking my confidence daily
Oh, Cecilia, I'm down on my knees
I'm begging you please to come home


Two meanings, one for the literal minded, one for the more spiritual.  Love with visualisation to achieve inspiration.

Saint Cecilia’s legacy is thus not that she was martyred, or hung on to her virginity against all odds, but that she is the replacement for the muses.  She is the spirit your Higher spirit can call on to get inspiration, to hear the inner music, whether it is musical inspiration or some other creative act.

And there have been some major and influential institutions founded on this very premise.  The Accademia Nazionale di Santa Cecilia in Rome, Italy is one of the oldest musical institutions in the world. It was founded by the papal bull, Ratione congruit, issued by Sixtus V in 1585, which invoked two saints prominent in Western musical history: Gregory the Great, for whom the Gregorian chant is named, and Saint Cecilia, the patron saint of music.

She has inspired poets to celebrate her.  There are poems by John Dryden and Alexander Pope, for example, and musicians have also been inspired to write music for her - Henry Purcell (Ode to St. Cecilia); several oratorios by Marc-Antoine Charpentier (In honorem Caeciliae, Valeriani et Tiburtij canticum); Handel (Ode for St. Cecilia's Day); Charles Gounod (St. Cecilia Mass); as well as Benjamin Britten, who was born on her feast day (Hymn to St Cecilia, based on a poem by W. H. Auden).

It is also interesting that composer Arvo Part, a man known for his very mystical and spiritual music, wrote "Cecilia, vergina romana" for Chorus (SATB) and orchestra in 2000. 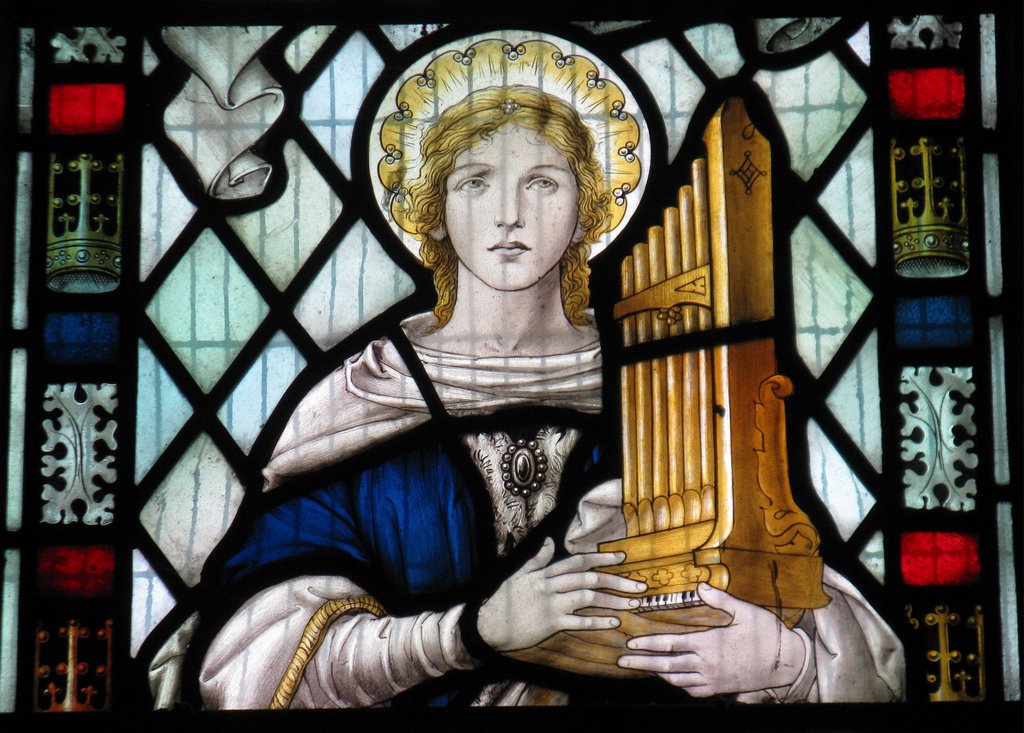