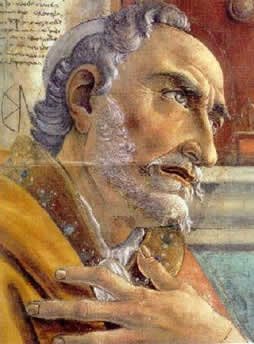 Augustine was born in 354 AD, the son of a Christian mother and a so called ‘pagan’ father who farmed a few acres in eastern Algeria.  Despite a mediocre education, he mastered Latin and went on to read writers such as Cicero and Virgil.  He became a teacher in oratory and literature in Carthage, Rome and then Milan.  In Carthage when still only young, he fell in love with a young girl of ‘lowly rank’ by whom he had a son – a son who turned out to be more talented than his father and was the pride of his life.  He lived with his partner faithfully for 15 years but a personal crisis then followed.

In order to advance his career he needed money and the only way he could get money was by marrying into a moneyed family.  Needless to say this caused an agony of conscience  - which should he choose – his lover or his career?  Augustine was not a heartless person and recognised the hurt he would cause his partner by choosing his career.  He had already become interested in religion and in the end he chose religion – not the poor lady he loved, or his son or his career, which is why he is so enamoured of the Catholic Church and a saint – he gave up all to be a Christian.  He was forced into ordination in 391AD and became a bishop in Hippo and for the remaining 34 years of his life that is what he remained.

Saint Augustine had only 3 spiritual experiences – none of them after he became a baptised Christian.  The cause was multiple.  Like many ambitious but sensitive people in the thick of a demanding career, he was horribly stressed.  He says at one point that his “profession was wearing me out”.  As a consequence it appears that he suffered from very severe heart problems……………..

Saint Augustine – Confessions
During that summer in consequence of too heavy a teaching load in literary studies, my lungs had begun to weaken.  Breathing became difficult.  Pains on the chest were symptoms of the lesion, and deprived me of the power to speak clearly or for any length of time.

In the end he resigns his career, his illness to a certain extent choosing his path for him………..

Saint Augustine – Confessions
At the end of the Vintage Vacation my resignation took effect and I notified the people in Milan that they should provide another salesman of words for their pupils.  The reasons were both that I had chosen to [take up religion] and that I had insufficient strength for that profession because of breathing difficulty and pain on the chest.

So a prosaic cause for a famous religious career.