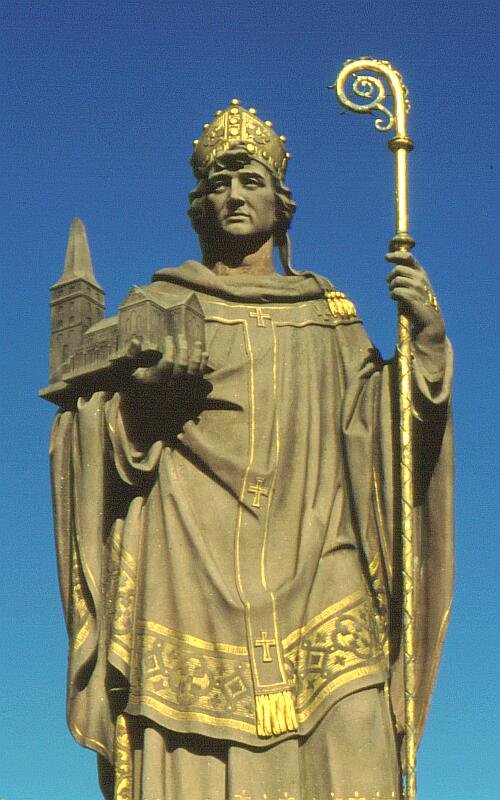 Saint Ansgar (8 September 801 – 3 February 865), also known as Anskar or Saint Anschar, was a Germanic Archbishop of Hamburg-Bremen. The See of Hamburg was designated a mission to bring Christianity to Northern Europe, and Ansgar became known as the "Apostle of the North".

Statues dedicated to him stand in Hamburg, Copenhagen, Ribe as well as a stone cross at Birka.

A crater on the Moon, Ansgarius, has been named for him.

His feast day is 3rd February.

Ansgar was a product of the phase of Christianization of Saxony (present day Northern Germany) begun by Charlemagne and continued by his son and successor, Louis the Pious.

A group of monks including Ansgar were sent back to Jutland with the baptized exiled king Harald Klak. Ansgar returned two years later after educating young boys who had been purchased because Harald had possibly been driven out of his kingdom. In 822 Ansgar was one of a number of missionaries sent to found the abbey of Corvey (New Corbie) in Westphalia, and there became a teacher and preacher. Then in 829 in response to a request from the Swedish king Björn at Hauge for a mission to the Swedes, Louis appointed Ansgar missionary. 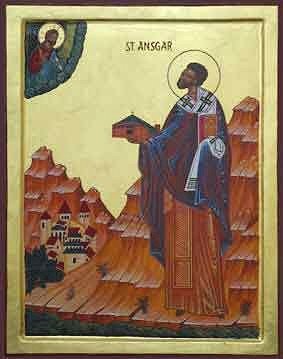 With an assistant, the friar Witmar, he preached and made converts for six months at Birka, on Lake Mälaren. They organized a small congregation there with the king's steward, Hergeir, and Mor Frideborg as its most prominent members.

In 831 he returned to Louis' court at Worms and was appointed to the Archbishopric of Hamburg. This was a new archbishopric with a see formed from those of Bremen and Verden, plus the right to send missions into all the northern lands and to consecrate bishops for them.

He was given the mission of evangelizing Denmark, Norway, and Sweden. The King of Sweden decided to cast lots as to whether the Christian missionaries should be admitted into his kingdom, and the lot was favorable.

Ansgar was consecrated in November 831, and, the arrangements having been at once approved by Gregory IV, he went to Rome to receive the pallium directly from the hands of the pope and to be named legate for the northern lands. This commission had previously been bestowed upon Ebbo, Archbishop of Reims, but the jurisdiction was divided by agreement, with Ebbo retaining Sweden for himself. For a time Ansgar devoted himself to the needs of his own diocese, which was still missionary territory with but a few churches. He founded a monastery and a school in Hamburg; the school was intended to serve the Danish mission, but accomplished little. 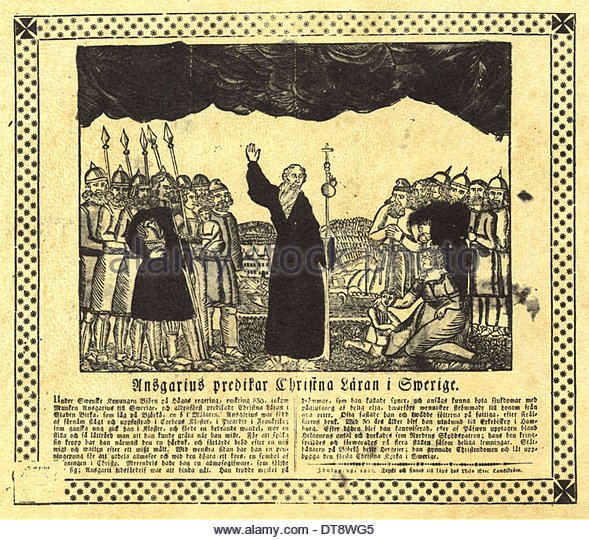 After Louis died in 840, his empire was divided and Ansgar lost the abbey of Turholt, which had been given as an endowment for his work. Then in 845, the Danes unexpectedly raided Hamburg, destroying all the church's treasures and books and leaving the entire diocese unrestorable. Ansgar now had neither see nor revenue. Many of his helpers deserted him, but the new king, Louis the German, came to his aid; after failing to recover Turholt for him, in 847 he awarded him the vacant diocese of Bremen, where he took up residence in 848. However, since Hamburg had been an archbishopric, the sees of Bremen and Hamburg were combined for him. This presented canonical difficulties and also aroused the anger of the Bishop of Cologne, to whom Bremen had been suffragan, but after prolonged negotiations, Pope Nicholas I approved the union of the two dioceses in 864.

Through all this political turmoil, Ansgar continued his mission to the northern lands. The Danish civil war compelled him to establish good relations with two kings, Horik the Elder and his son, Horik II. Both assisted him until his death (Wood, 124–125). He was able to secure recognition of Christianity as a tolerated religion and permission to build a church in Sleswick. He did not forget the Swedish mission, and spent two years there in person (848–850), at the critical moment when a pagan reaction was threatened, which he succeeded in averting. In 854, Ansgar returned to Sweden when king Olof ruled in Birka. According to Rimbert, he was well disposed to Christianity. On a Viking raid to Apuole (current village in Lithuania) in Courland, the Swedes plundered the Curonians.

Visions and other experiences

Ansgar was the son of a noble Frankish family, born near Amiens. After his mother's early death, Ansgar was brought up in Corbie Abbey, and was educated at the Benedictine monastery in Picardy.  According to the Vita Ansgarii ("Life of Ansgar"), when the little boy learned in a vision that his mother was in the company of Saint Mary, his careless attitude toward spiritual matters changed to seriousness. His pupil, successor, and eventual biographer Rimbert considered the visions of which this was the first to be the main motivation of the saint's life.

Although a historical document and primary source written by a man whose existence can be proven historically, the Vita Ansgarii ("The Life of Ansgar") is partly concerned with Ansgar's visions, which, according to the author Rimbert, encouraged and assisted Ansgar's remarkable missionary feats.

Through the course of this work, Ansgar repeatedly embarks on a new stage in his career following a vision.

According to Rimbert, his early studies and ensuing devotion to the ascetic life of a monk were inspired by a vision of his mother in the presence of Saint Mary.

Again, when the Swedish people were left without a priest for some time, he begged King Horik to help him with this problem; then after receiving his consent, consulted with Bishop Gautbert to find a suitable man. The two together sought the approval of King Louis, which he granted when he learned that they were in agreement on the issue.

Ansgar was convinced he was commanded by heaven to undertake this mission, and was influenced by a vision he received when he was concerned about the journey, in which he met a man who reassured him of his purpose and informed him of a prophet that he would meet, the abbot Adalhard, who would instruct him in what was to happen. In the vision, he searched for and found Adalhard, who commanded, "Islands, listen to me, pay attention, remotest peoples", which Ansgar interpreted as God's will that he go to the Scandinavian countries as "most of that country consisted of islands".  Although symbolically an island has a different meaning.

Ansgar wore a rough hair shirt, lived on bread and water, and showed great charity to the poor. Being the first missionary in Sweden and the organiser of the hierarchy in the Nordic countries, he was declared Patron of Scandinavia. Ansgar was buried in Bremen in 865.

His life story was written by his successor as archbishop, Rimbert, in the Vita Ansgarii.

The observation we have is of a near death experience.