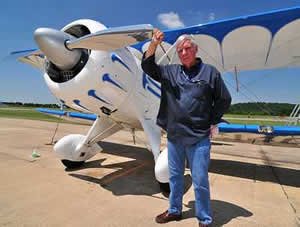 Richard Glenn "Dick" Rutan (1938) is an aviator who piloted the Voyager aircraft around the world non-stop with co-pilot Jeana Yeager. He was born in Loma Linda, California.

He joined the Air Force Aviation Cadet Program at age 19 and later became a lieutenant in the Air Force. Rutan served during the Vietnam War with the 37th Tactical Fighter Wing at Phu Cat Air Base, completing 325 combat missions. On August 17, 1967, his Misty tour ended when his F-100F was shot down. He was also forced to eject a second time when the aircraft he was flying over England experienced engine failure.

After service, he founded an aviation company with his brother Burt Rutan.  At lunch one day Burt, an aircraft designer, sketched on a napkin the plane design that would enable Dick and Jeana Yeager to break the flight distance record of 12,532 miles (20,168 kilometers) set by a B-52 Stratofortress bomber in 1962.

To realize Burt's design, they assembled a team of more than 50 and refined — over the next six years — Burt's original design.

Dick Rutan and Jeana Yeager took off in Voyager on December 14, 1986 from Edwards Air Force Base's 15,000-foot (4,600 m) runway. They struggled throughout the flight with weather, poor visibility of clouds and mountains, night stress, sleep deprivation, a failing engine cooling water pump, and the continuing demand to exactly manage fuel.

Finally, after 9 days, 3 minutes, and 44 seconds of flight, and a harrowing extended sudden stoppage of their engine power as they flew up the California coast, they touched down on December 23 with only a few gallons of fuel remaining. The distance flown was  24,986-mile (40,211 km).

In February 1998, Rutan attempted to repeat the round-the-world feat in a balloon, but failed in that attempt when its fabric helium-filled envelope structure developed tears.

In 1997, Dick and Mike Melvill flew around the world in two Rutan Long-EZ aircraft that each had constructed, with some legs of the trip extending over 14 hrs. in length.