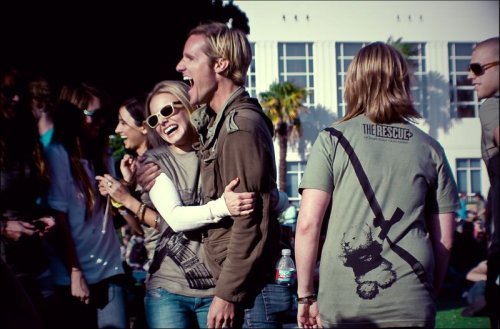 Jason Russell is both an explorer and adventurer and a campaigner for human rights using the media to bring human rights abuses to public attention.

His 'exploring' takes him to some of the most inhospitable parts of the world, but not the areas one might think - he goes to places where there is fear, anarchy, and complete breakdown of society, where children wield guns in the streets, where law and order has ceased, where there is no longer any system to stop hurt.  And of course we all know where that is - Africa.

He was born on October 12, 1978 and is an American.  He describes himself as a film and theater director, choreographer, and activist.  He also co-founded Invisible Children, Inc.

He is perhaps best known as the director of Kony 2012, a short documentary film that 'went viral' [got a lot of views] in the beginning of March 2012. In the first two weeks it gained more than 83 million views on YouTube and became the subject of intensive media scrutiny . Its subject is the Ugandan rebel leader Joseph Kony, his alleged war crimes, and the movement to bring him to the International Criminal Court.

To see the full Wikipedia entry follow this LINK.