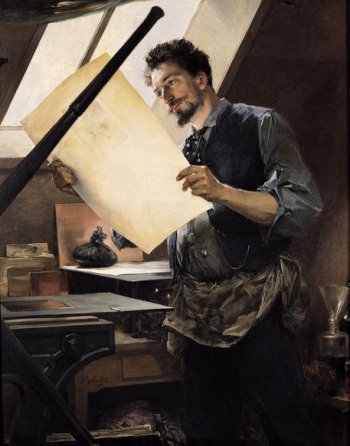 'Felicien Rops in his Studio' by Paul Mathey.

Félicien Rops (7 July 1833 – 23 August 1898) was a Belgian artist, known principally for his etchings and aquatints.  Rops often combined soft-ground etching—a technique practiced by few artists of his day—with mezzotint or aquatint, and sometimes added hand-colouring to his plates. His etchings were popular, and influenced many artists, including Edvard Munch.  He was technically an extremely good artist, as well as being an inspired one.

First I think it is helpful to know that Félicien Rops was a freemason and a member of the Grand Orient of Belgium, which makes him interested in spirituality.  He was also a friend of Charles Baudelaire, whom he met towards the end of the poet's life in 1864.  Baudelaire left a lasting impression upon Rops and Rops created the frontispiece for Baudelaire's Les Épaves, a selection of poems from Les Fleurs du mal that had been censored in France, and which therefore were published in Belgium.

Rops is classified by art historians as a Decadent, although this is not a terribly helpful label to hang on him.  There is one thing abundantly clear, however, and that is that he was absolutely and totally au fait with symbolism.  His use of symbolism is superb and he uses symbols in a wonderfully shocking way.  Some artists decided that they needed to get people to sit up and take note by being Surrealists.  Felicien Rops decided he would get people talking by using symbols in compositions designed to shock the rather conservative elite of the day. 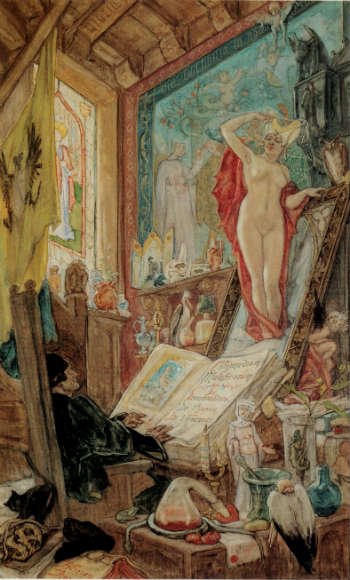 No, wrong on all counts.  At the time that Magritte, Rops and numerous others, like Dali, were painting, symbolism had taken a somewhat erratic course.  In order to preserve spiritual truths in a hostile age – an age which is hostile even today but from science and not religion, - the symbolism of spirituality had to be preserved in art.

Paintings and poetry were initially meaningful, ‘realistic’ but symbolic.  But this did not help people remember the symbols, they simply enjoyed the ’nice’ poetry and paintings.  Then the Surrealists started to paint pictures with nothing but symbols.

Rops painted symbols but placed the symbols in a wholly alien setting.  The objective was to get people’s attention and it worked.

The aim is in part to try to awaken buried memories of the symbolism embodied in the picture.  When I first saw his pictures I thought he was making fun of spirituality until realised what he was doing and how very extensive his knowledge was.  His life did however help him to add that little needed touch of satire to his pictures.

Rops was born in Namur, the only son of Sophie Maubile and Nicholas Rops, who was a textile manufacturer. After his first artistic training at a local academy, he relocated to Brussels at the age of twenty and briefly attended the University of Brussels.  He subsequently attended the Académie de Saint-Luc and began creating satirical lithographs which were published in the student magazine Le Crocodile. These and the lithographs he contributed until 1862 to the magazine Uylenspiegel brought him early fame as a caricaturist.

He produced a number of etchings as illustrations for books by Charles de Coster. In 1862 he went to Paris where he met the etchers Félix Bracquemond and Jules Ferdinand Jacquemart. His activity as a lithographer ceased about 1865, and he became a restless experimenter with etching techniques.  Rops was one of the founding members of Société Libre des Beaux-Arts of Brussels (Free Society of Fine Arts, 1868–1876) and Les XX ("The Twenty"), formed in 1883.

In 1857, aged 24, he married Charlotte Polet de Faveaux, with whom he had two children, Paul and Juliette, Juliette died at a young age. Things went from bad to worse and his marriage eventually failed.  Rops moved to Paris in 1874 where he lived with two sisters, Aurélie and Léontine Duluc. With Léontine, he had one daughter, Claire.

Rops's eyesight began to fail in 1892 when he was in his late fifties. He kept up his literary associations until his death, aged 65.

What was his inspiration?  Belief in the spiritual world.