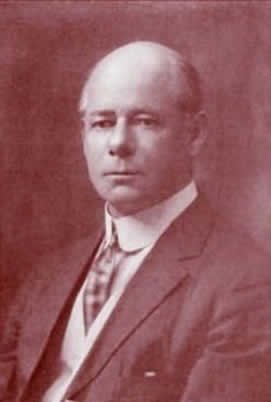 Morgan Andrew Robertson (1861–1915) was a well-known American author of short stories and novels, and the self-claimed inventor of the periscope. He was the son of Andrew Robertson, a ship captain on the Great Lakes, and Amelia (Glassford) Robertson.

Morgan went to sea as a cabin boy and was in the merchant service from 1866 to 1877, rising to first mate. Tiring of life at sea, he studied jewelry making at Cooper Union in New York City and worked for 10 years as a diamond setter.  But his health started to suffer and his eyesight gradually deteriorated.

He turned to writing sea stories, placing his work in such popular magazines as McClure's and the Saturday Evening Post. Robertson never made much money from his writing, a circumstance that greatly embittered him. Nevertheless, from the early 1890s until his death in 1915 he supported himself as a writer and enjoyed the company of artists and writers in a small circle of New York's bohemia. Robertson was found dead of heart disease in an Atlantic City hotel room.

Why is he included?  Because he wrote a most prophetic story at a time when his heart disease was well advanced.

Premonitions: A leap in to the future – Herbert Greenhouse [1971]

Morgan Robertson saw the future of the Titanic while he was writing a story.... but there was an additional factor in Robertson's case - he knew he was something of a psychic. Awed by his ability as a writer, he theorized that the spirit of a literary person who had died took over his body and brain when he sat down to write his stories of the sea.

Robertson called his co-author his "astral writing-partner." When he tried to coax his conscious mind into producing a story, nothing would happen and he would sit for hours at a time staring at his typewriter. Then "the mood" would come on. He would go into a trance, 'the present would fade away, and he would find himself in another dimension of time and space. It was in this mental state that he saw his vision of the Titanic and wrote about the Titan.....

Late in life Robertson's "astral writing-partner" deserted him and nothing more would come out of his typewriter.

Finally in 1915, three years after the Titanic sank, he went off to Atlantic City and took a room in a cheap hotel. In the morning he was found dead, sitting upright in a chair so that he could die as he watched the waves come in.