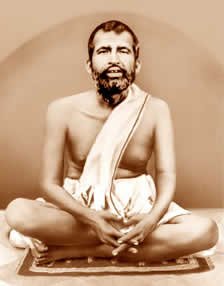 Ramakrishna ( 1836 –  1886), was a famous mystic of 19th-century India. His religious school of thought led to the formation of the Ramakrishna Mission by his chief disciple Swami Vivekananda.

Ramakrishna was born in a poor Brahmin Vaishnava family in rural Bengal. He never learned to read or write but got to know the Puranas, the Ramayana, the Mahabharata, and the Bhagavata Purana, by hearing them from wandering monks and the Kathaks—a class of men in ancient India who preached and sang the Puranas.  He had  his first spiritual experience at the age of six and reportedly had experiences of similar nature a few other times in his childhood. All these early experiences were visions or hallucinations.  From his tenth or eleventh year on, these became common. 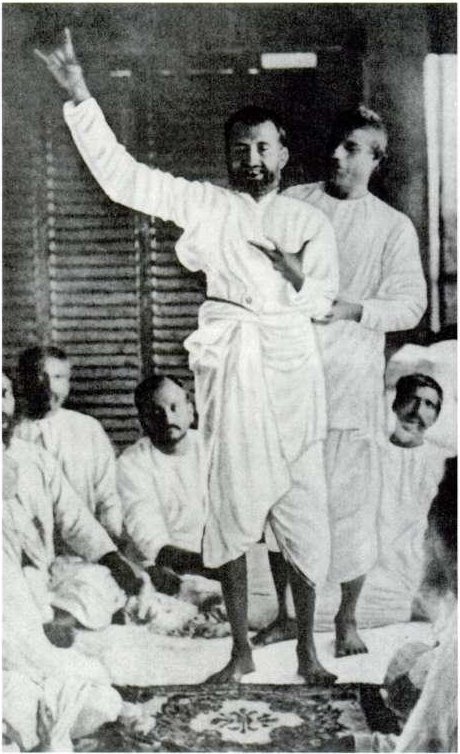 Ramakrishna in samadhi at the house of Keshab Chandra
Sen. He is seen supported by his nephew Hriday - 1879

Ramakrishna reportedly had a vision of the goddess Kali at this time "... houses, doors, temples and everything else vanished altogether; as if there was nothing anywhere! And what I saw was an infinite shoreless sea of light; a sea that was consciousness. However far and in whatever direction I looked, I saw shining waves, one after another, coming towards me."

Ramakrishna married but by the time his bride joined him, he had already embraced the monastic life of a sannyasi; as a result, the marriage was never consummated.

The most widely known amongst his first spiritual teachers was an ascetic woman, called Bhairavi Brahmani skilled in Tantra and Vaishnava bhakti. The Bhairavi initiated Ramakrishna into Tantra. Under her guidance, Ramakrishna “went through sixty four major tantric sadhanas” which were completed in 1863. This is called the 'left hand path' and put very simply is based on sexual stimulation as the means of achieving spiritual experience.

The description provided matches all the steps I have been able to piece together from the Qigong and other systems that use the technique, but it makes Ramakrishna one of the few sources on this website who not only openly admitted to using the techniques, but also achieved some fairly astounding levels of experience by doing so. 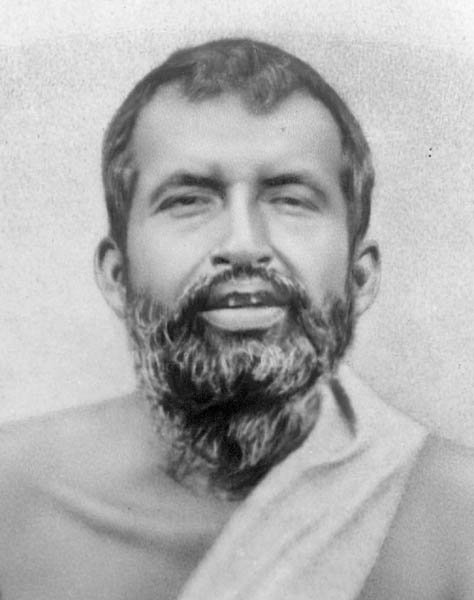 You adjust your diet “eating  of parched grain, fish and meat along with drinking of wine” and then indulge in sexual stimulation without orgasm – tantric sex.

The Bhairavi also taught Ramakrishna the kumari-puja, a form of ritual in which the Virgin Goddess is worshiped symbolically in the form of a young girl.  This is love with visualisation. Under the tutelage of the Bhairavi, Ramakrishna also learnt Kundalini Yoga.

There are some truly bizarre accounts of Ramakrishna in some books, usually by people who have no idea what tantric sex is, in fact at times they appear to not know what sex or love is either.  Ramakrishna's explicitly sexual language 'shocked 19th-century Westerners', even scholars Max Müller who were otherwise his admirers. Müller wrote that his language was at times "abominably filthy". I don't suppose it would strike us that way now, but how sad that what Ramakrishna was trying to explain was not properly documented.

One easily forgotten academic argued that in his presentation of his master, Vivekananda “hid much of Ramakrishna’s embarrassing sexual oddities from the public, because he feared that Ramakrishna would be misunderstood”, well now what a surprise eh?

Christopher Isherwood who wrote the book Ramakrishna and his Disciples (1965) and was perhaps a little bit more clued up on the practises involved said in an interview that , "Ramakrishna was completely simple and guileless. He told people whatever came into his mind, like a child. ..........   I think that is always a sign of great spiritual enlightenment."

Our loss is that these explanations were never properly recorded. 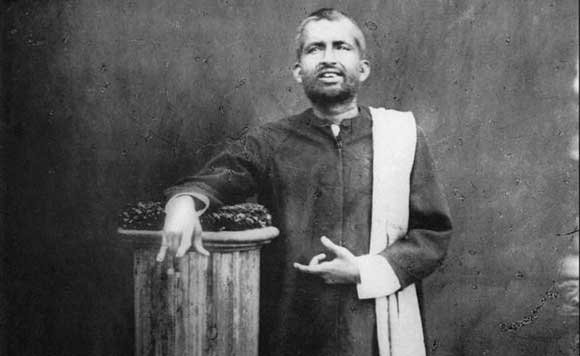 According to contemporary reports, Ramakrishna's “linguistic style was unique, even to those who spoke Bengali”. It contained obscure local words and idioms from village Bengali, interspersed with philosophical Sanskrit terms and references to the Vedas, Puranas, and Tantras.

Scholar Amiya P. Sen argued that certain terms that Ramakrishna may have used only in a metaphysical sense are being improperly invested with new, contemporaneous meanings.

So all a bit sad, from our perspective, in that this source of experience on one of the major successful ways of obtaining spiritual experience using a natural human function as opposed to drugs, and one used by countless cultures for thousands of years, was dismissed for saying words either misunderstood or too shocking for our prudish ancestors.

These were not the only techniques he used however,  Later an Advaita Vedantin ascetic taught him 'non-dual meditation', which is contemplation in its various guises and according to Ramakrishna, he experienced nirvikalpa samadhi under his guidance.

Ramakrishna also experimented with other religions, notably Islam and Christianity, and said that they all lead to the same God. 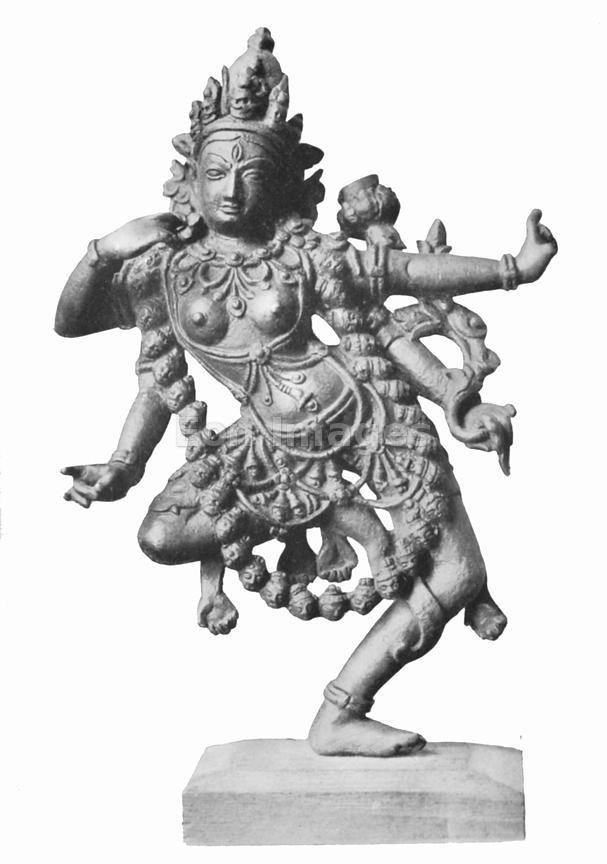 Kali - this statue is full of symbolic features - 'arms',
'necklace', left foot, 'nakedness', 'crown', 'bracelet'
and so on - see the symbol section

I liked this account of his later life, it gives a good flavour for the sort of chap he was “As his name spread, an ever-shifting crowd of all classes and castes visited Ramakrishna. According to Kathamrita it included, childless widows, young school-boys, aged pensioners, Hindu scholars and religious figures, men betrayed by lovers, people with suicidal tendencies, small-time businessmen, and people dreading the grind of samsaric life".

Ramakrishna's biographers, describe him as talkative. According to them, he would reminisce for hours about his own eventful spiritual life, tell tales, explain Vedantic doctrines with extremely mundane illustrations, raise questions and answer them himself, crack jokes, sing songs, and “mimic the ways of all types of worldly people, keeping the visitors enthralled”.  He sounds rather fun doesn’t he?

In the beginning of 1885 aged only 49, Ramakrishna  developed  throat cancer. The condition gradually worsened and he died in the early morning hours of August 16, 1886 at the Cossipore garden house.

In India, Sri Ramakrishna Jayanti is celebrated as one of the national religious festivals. Large numbers of people belonging to different religions come together at the temples in joy, happiness and gratitude to pay respects and homage to Sri Ramakrishna, whose teachings still remain in the hearts of the people.