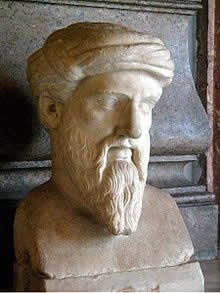 Pythagoras was born in 490 BC.  He  was a Greek mathematician and founder of the religious movement called Pythagoreanism. He is often revered as a great mathematician, mystic and scientist. Herodotus referred to him as "the most able philosopher among the Greeks". Aristippus explained his name by saying, "He spoke (agor-) the truth no less than did the Pythian (Pyth-)”.  Today, Pythagoras is revered as a prophet by the Ahl-al-Tawhid or Druze faith along with his fellow Greek, Plato.

Known as "the father of numbers", Pythagoras made influential contributions to philosophy and religious teaching. Because legend and obfuscation cloud his work even more than with the other pre Socratic philosophers one can say little with confidence about his life and teachings.

No texts by Pythagoras survive, although forgeries under his name — a few of which remain extant — did circulate in antiquity. Ancient Pythagoreans usually quoted their master's doctrines with the phrase autos ephe ("he himself said") — emphasizing the essentially oral nature of his teaching.  The following information is, however, of relevance.... 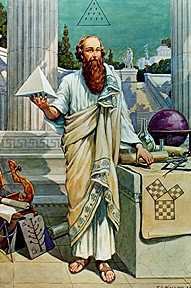 Professor Joscelyn Godwin – Music Mysticism and magic
If, as seems certain from Ernest McClain’s discoveries, the Babylonians and Egyptians were familiar with the connection of tone with number and had developed an elaborate symbolism of tuning systems two millenia or more before Pythagoras, then in view of his extensive travels and initiations in both these countries Pythagoras must be regarded not as the inventor but as the importer of such knowledge to Greece. This in no way lessens his achievement as one of the fathers of the Greek intellectual miracle….

and indeed we do know that Pythagoras was initiated into the Mysteries.

Pythagoras undertook a reform of the cultural life of Croton, urging the citizens to follow virtue and form an elite circle of followers around himself called ‘Pythagoreans’. The school was open to male and female students alike. Very strict rules of conduct governed this cultural center. The organization was in some ways a school, in some ways a brotherhood, and in some ways a monastery. Richard Blackmore, in his book The Lay Monastery (1714), saw in the religious observances of the Pythagoreans, "the first instance recorded in history of a monastic life." 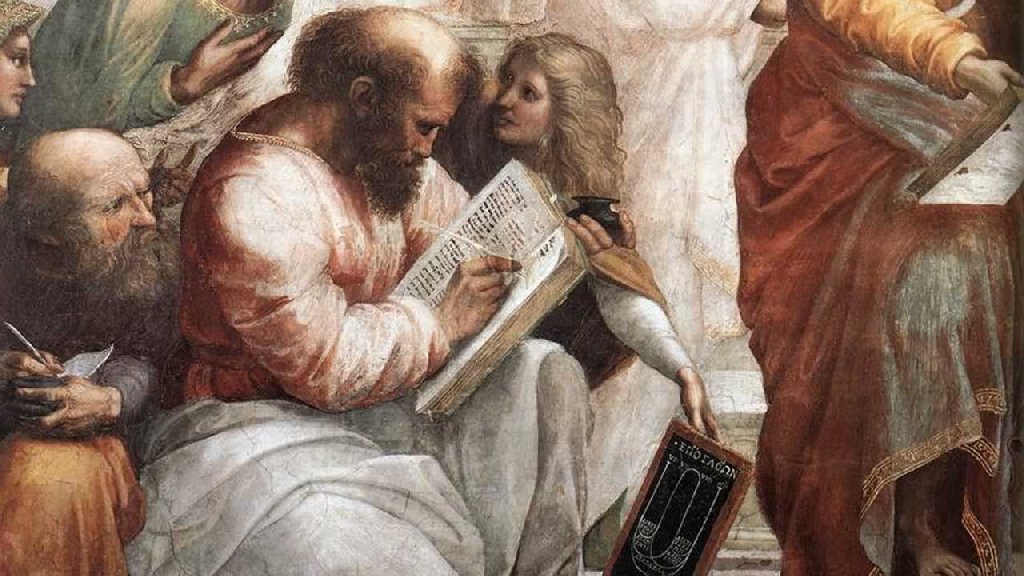 Mathematical study - Pythagoras and his students believed that everything was related to mathematics, that numbers were the ultimate reality and that, through mathematics, everything could be predicted and measured in rhythmic patterns or cycles. According to Iamblichus, Pythagoras once said that "number is the ruler of forms and ideas [function]and the cause of gods and demons."

Pythagoras also believed that the stability of all things that create the universe is dependent on numbers. Things like health rely on a stable proportion of elements see levels and layers; too much or too little of one thing causes an imbalance that makes a being unhealthy.

The Pythagoreans are generally accepted as philosophical mathematicians who had an influence on the beginning of axiomatic geometry.  Pythagorus himself is best known for the Pythagorean theorem,  however, much of the mathematics developed by the Pythagoreans was written down 200 years later by Euclid in The Elements. 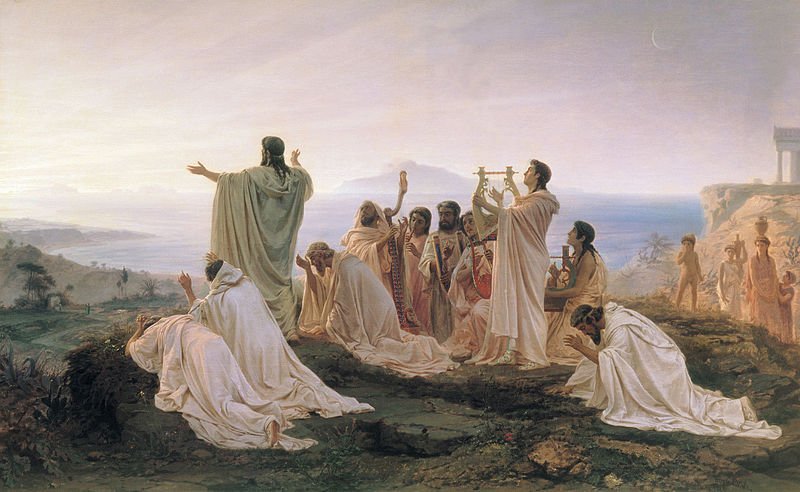 Music - Music featured as an essential organizing factor of life in Pythagorean society.  The disciples would sing hymns to Apollo together regularly; they used the lyre to cure illness of the soul or body and poetry recitations occurred before and after sleep to aid the memory.

Pythagoras also believed that musical notes could be made more harmonious and beautiful.  After studying the effects of sound and ratios he devised Pythagorean tuning - a system of musical tuning in which the frequency relationships of all intervals are based on the ratio 3:2. Although attributed to Pythagoras, its use was documented as long ago as 3500 B.C. in Babylonian texts. It is the oldest way of tuning the 12-note chromatic scale and as such, it is the basis for (although distinct from) many other methods of tuning. 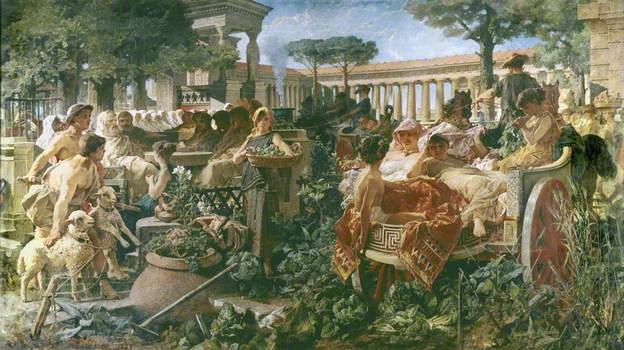 A Pythagorean School Invaded by Sybarites

Transmigration of souls – Pythagoras believed that thought processes and the soul were located in the brain and not the heart.

He was also a believer of ‘transmigration’, or the reincarnation of the spirit again and again into the bodies of humans, animals, or vegetables until it became ‘moral’. His ideas of reincarnation were influenced by ancient Greek religion. He himself claimed to have lived four lives that he could remember in detail, and heard the cry of his dead friend in the bark of a dog.

The Pythagoreans performed purification rites and followed and developed various rules of living which they believed would enable their spirit to achieve a higher rank among the gods. Much of their mysticism concerning the soul seems inseparable from the Orphic  tradition. The Orphics advocated various purificatory rites and practices as well as 'incubatory rites of descent into the underworld'. Pythagoras is also closely linked with Pherekydes of Syros, the man ancient commentators tend to credit as the first Greek to teach transmigration of souls. Ancient commentators agree that Pherekydes was Pythagoras's most intimate teacher. Pherekydes expounded his teaching on the soul in terms of a pentemychos ("five-nooks", or "five hidden cavities"). 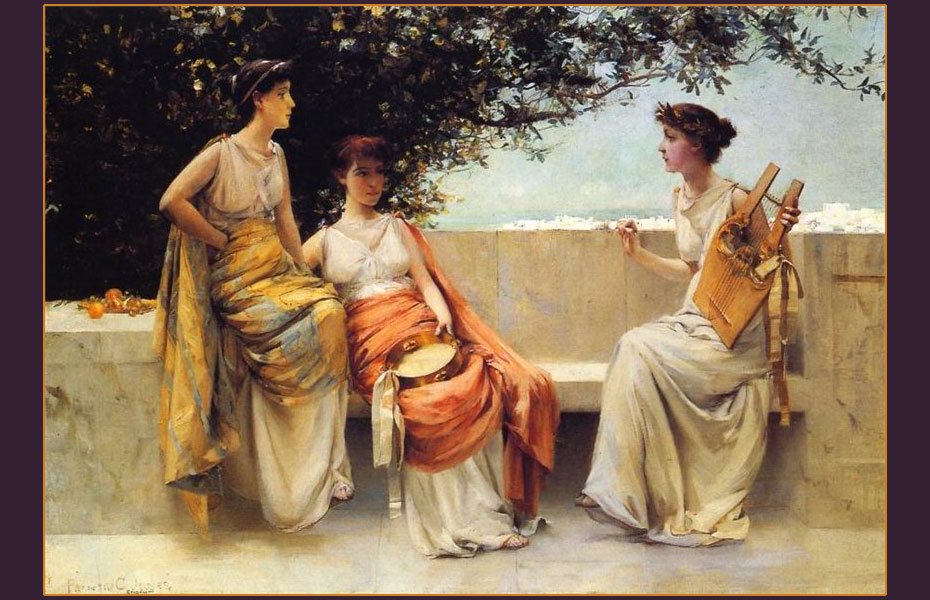 The rules of the order - The school was highly concerned with the morality of society. Members were required to live ethically, love one another, share political beliefs, practice pacifism, and devote themselves to the mathematics of nature.  Rules were devised as either direct statements of action or parables, for example; 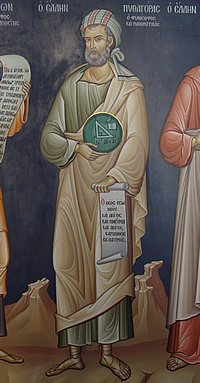 Other examples - I have taken the following at face value "Pythagorean society is associated with prohibitions such as not to eat beans. Superficially these seem like primitive superstition and the abusive epithet ‘mystikos logos’ meaning "mystical speech" was hurled at Pythagoras even in ancient times to discredit him. The prohibition on beans, however, could be linked to favism - a disorder characterized by a hemolytic reaction to consumption of broad beans which is relatively widespread around the Mediterranean"

Parables – many of the apparently odd rules were in fact parables or allegories - riddles for the initiated:

Groups - The Pythagoreans were divided into two groups the mathematikoi ("mathematicians") and an outer circle called the akousmatikoi ("listeners").

Of .. the life of Pythagoras, it is necessary to observe that the original has been transmitted to us in a very imperfect state, partly from the numerous verbal errors of the text, partly from the want of connexion in the things that are narrated, and partly from many particulars being related in different places in the very same words; so that the conjecture of Kuster, one of the German editors of this work, is highly probable, that it had not received the last hand of Iamblichus, but that others formed this treatise from the confused materials which they found among his manuscripts, after his death. Notwithstanding all its defects, however, it is, as I have before observed, a most interesting work; and the benefits are inestimable, which the dissemination of it is calculated to produce.  And as two of the most celebrated critics among the Germans, Kuster and Kiessling, have given two splendid editions of this work, it is evident they must have been deeply impressed with a conviction of its value and importance.

As to the Pythagoric Ethical Fragments, all eulogy of them is superfluous, when it is considered that, independently of their being written by very early Pythagoreans, they were some of the sources from which Aristotle himself derived his consummate knowledge

There are also what are called the Pythagoric Sentences, however, the Greek original has been lost and only a Latin version claimed as his by Presbyter Ruffinus remains.  The Sentences of Demophilus and the Golden sentences of Democrates also contain some quotes from Pythagoras.